Several Turkish university students remain in police custody for protesting Turkey’s military operations in northern Syria as the president leads a crackdown on academics who have dared to voice their opposition. 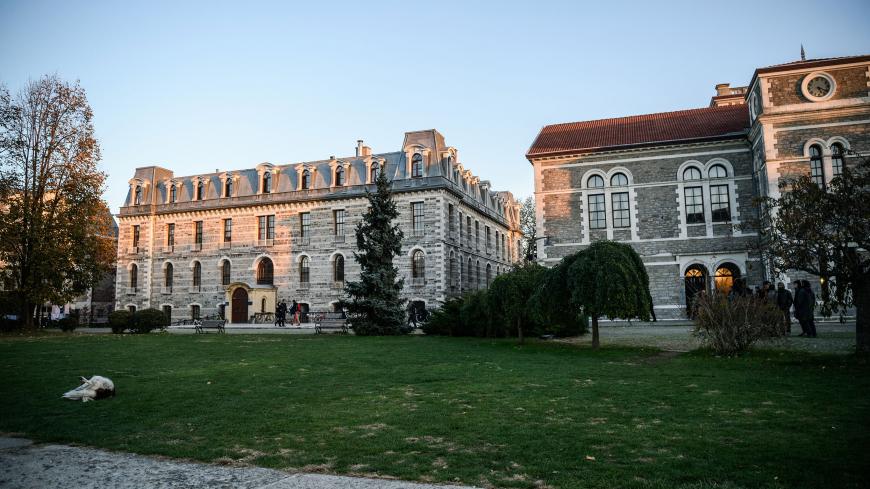 At least 11 students from Istanbul’s prestigious Bogazici University remain in police custody for airing opposition to Turkey’s ongoing military operations against Kurdish militants in northern Syria amid a broadening crackdown on anti-war sentiments.

Turkey’s President Recep Tayyip Erdogan angrily denounced the students, calling them terrorists and vowing to establish their identities from camera footage of the incident. “We will catch those marginals by the ear and hurl them to the ground,” he snarled during an address to his ruling Justice and Development Party’s Beyoglu branch in Istanbul.

He also took aim at Bogazici professors, saying if they had collaborated in the protest, “we will do what is necessary to them too. … We will not cede ground to those who unleash terror on campus lawns.”

Seven of the students were eventually freed but four more were rounded up earlier this week after a further volley of threats from Erdogan, who called the students “communists” and “traitors” and vowed to end their academic lives at a public rally over the weekend.

One of the freed students told German broadcaster Deutsche Welle that he and fellow students had been blindfolded and then beaten by police as they were being driven away. The student, who declined to be identified by name, said they had bruises to prove it and that one of them had a fractured nose. He said the police assaulting them had told them, “If we hit you, you will be less intelligent.”

Human Rights Watch, a New York-based advocacy group, said that the Turkish authorities had detained 648 people between Jan. 20 and Feb. 26 over social media posts criticizing Turkey’s military operations in Afrin. They held 197 others “for expressing criticism in other forms, including street protests or expressing solidarity with protesters on social media,” the group said in a report this week.

Its Europe and Central Asia director, Hugh Williamson, said, “Detaining and prosecuting people for tweets calling for peace is a new low for Turkey’s government.” He added, “Turkish authorities should respect people’s right to peacefully criticize any aspect of government policy, including military operations, and drop these absurd cases.”

The atmosphere at Bogazici remains tense with police patrolling the campus grounds as rumors of further detentions continue to swirl. Despite the growing pressure, many Bogazici students were present at today’s hearing of two academics from the university facing trial together with more than a hundred others who signed a 2016 declaration protesting the resumption of the army’s military offensive against Kurdistan Workers Party rebels in Turkey’s mainly Kurdish southeast region.

In October, prosecutors drew up an indictment accusing the signatories of engaging in terrorist propaganda. At least three were convicted to 15 months in jail. Some 4,811 Turkish academics, including hundreds of Academics for Peace, were sacked under executive decrees issued under a state of emergency that remains in effect since the failed July 2016 coup to violently overthrow Erdogan.

A similarly resolute group of Bogazici students appealed to their professors to stand firm today. In a statement, the members of the university’s Kurdish literature club declared, “The AKP and its president, who have made a habit of ignoring academic autonomy and freedom … are seeking to quash differences in opinion with pressure and threats.” The students warned, “Following this overt attack on Bogazici students, the next target will be you. We invite you to speak up and to support your students before it is too late.”