The latest interviews granted by Police Commissioner Roni Alsheikh to news outlets identified with the right have raised concerns that his efforts to protect his image could have unintended consequences. 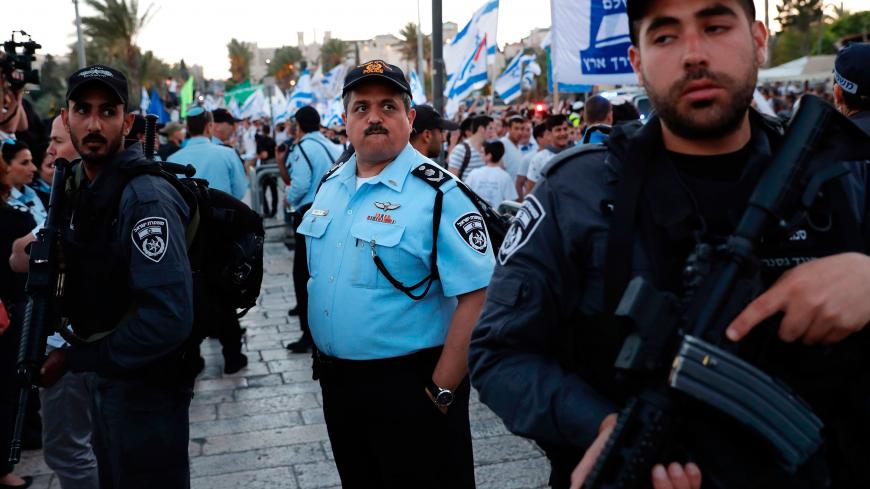 The chief of the Israeli Police, Commissioner Roni Alsheikh (C), is seen during the Jerusalem Day march in Jerusalem, May 24, 2017. - THOMAS COEX/AFP/Getty Images

There was nothing ordinary about the two interviews that Israel Police Commissioner Roni Alsheikh gave to major media outlets identified with the right last weekend. These were not chance interviews, of course. They were part of a larger media strategy intended to temper the outrage that the right feels toward him.

Alsheikh is one of the most senior figures of the religious Zionist movement, holding a key position in the country’s leadership. He is also intimately familiar with the anger felt toward him in the very home and community where he grew up. The right believes that the Israel Police have been showing excessive motivation in bringing Prime Minister Benjamin Netanyahu to trial, where he could be ultimately convicted. On the advice of his media consultants, Alsheikh sat for a long and open interview with the editor of Makor Rishon, Haggai Segal, on March 23. This followed an interview with Channel 20 News on March 22, which is considered pro-Netanyahu. In both interviews, Alsheikh spoke at length about the various investigations of the prime minister and responded to the right’s criticism about his role in the investigations.

It was his choice of these two media outlets, which are very popular among the religious Zionist community and the right in general, which is so disconcerting. It raises the question of why it was so important for Alsheikh to explain himself to this community in particular. Aren’t interviews he grants generously to the more central media outlets in the country enough for him to outline his positions and approach and to provide support for his officers? Does the Israel Police commissioner see a role for himself in politics as part of right-wing HaBayit HaYehudi, as has already been hinted in the past?

Assuming that Alsheikh is as sure of his behavior as he makes a point of saying, there is no need for him to provide the media with lengthy explanations about the most volatile investigations in the country before they are even over. The investigations and their findings should speak for themselves at the end of the entire process. Right now, however, the overriding impression is that the Israel Police commissioner is giving all these interviews for personal reasons, involving his public image.

This is not to cast aspersions on Alsheikh’s integrity or his objective of uncovering the truth. The problem with Alsheikh is his media behavior in all matters pertaining to the investigation of the prime minister. To a bystander, it could seem like he is in the middle of some personal campaign in which he is positioning himself against Netanyahu, as if they were political rivals.

In a controversial interview that he gave to journalist Ilana Dayan in February, just before the Israel Police submitted their recommendation to indict the Netanyahu, Alsheikh’s mood could best be described as giddy. He gave the impression that he wanted to say much more than he actually could. Alsheikh did more than just hint that Netanyahu interfered with the investigation by sending private investigators to search for incriminating materials against his interrogators. The charge has yet to be investigated in depth. Even now, the nature of that charge is not at all clear. The right was outraged by that interview, claiming it was utterly inappropriate for the commissioner to release information pertaining to the investigation or even make insinuations before the recommendations are released.

There can be no doubt that over the last year Alsheikh has been able to overcome being a subject of ridicule and attacks by the media and emerge as a highly regarded figure in the investigation saga. This image-improvement increased as Alsheikh made himself available to the media during the Netanyahu investigations. The extreme change in public perceptions regarding Alsheikh is the direct consequence of a coordinated effort by his media consultants, intended to improve the Israel Police commissioner’s public and media image when it was at a low point. It succeeded beyond all expectations. Alsheikh is now seen as a powerful police commissioner who is also popular with the press.

The expansion of the investigations and the prime minister’s attacks on the Israel Police only intensified Alsheikh’s bellicosity in his statements to the media. Alsheikh could have taken a more official and stately approach and backed his interrogators without putting himself right in the middle of things. It would not have harmed the investigations, and it would have benefited the image of the Israel Police, which all polls show could use a boost.

A comparison of Alsheikh’s media conduct and that of former Police Commissioner Dudi Cohen during the investigation of Prime Minister Ehud Olmert is interesting. The public has a short memory, so it forgot how Olmert attacked the Israel Police and accused its investigators of intentionally leaking information in order to harm him in 2008. While Netanyahu took things a step further by turning his attacks on the Israel Police into a political campaign, Olmert didn’t exactly show statesmanlike behavior either.

In contrast, Cohen did act officially throughout most of the Olmert investigations. He was careful to back Israel Police investigators while giving terse statements to the media. When it was released that Olmert chastised his investigators for “endlessly leaking [information] and waging a media war that deviates from any acceptable norm that would otherwise characterize a decent police force,” Cohen hinted to the media that the sources of the leaks were none other than Olmert’s own lawyers. At the time, the Israel Police were criticized and attacked by various ministers, including Deputy Prime Minister Haim Ramon. He accused the police of acting inappropriately in their handling of the sexual harassment case involving him. Former Justice Minister Daniel Friedman claimed at the time that the Israel Police had just deposed a sitting prime minister.

The first comprehensive interview granted by Police Commissioner Cohen was to journalist Ari Shavit of Haaretz in September 2008, a year and a half after Cohen took the position. In that interview, he was critical of Olmert and certain ministers such as Ramon, but he was reprimanded by the government for that and eventually apologized for his comments. Despite all that, Cohen would not allow himself to get swept up in a personal feud against Olmert and his ministers. He went back on topic immediately, and his generally measured responses were in no way detrimental to the progress of the Olmert investigation. The Israel Police eventually recommended that the prime minister should be indicted, and he was. Olmert was tried, found guilty and served time in prison.

What this shows is that in the Netanyahu investigations, the determining factor will ultimately be the evidence presented to the attorney general. The flood of interviews given by Alsheikh will have no impact whatsoever on the investigations themselves.

Alsheikh would contribute more to the department he heads if he would stick to the issues instead of giving giddy interviews or going off on competing ego trips with Netanyahu. While his behavior is not harmful to the investigations per se, it is not beneficial to them either. On the other hand, it is damaging to the image of the Israel Police. This is especially troubling at a time when Netanyahu’s supporters are convinced that Alsheikh is persecuting the prime minister.