Despite the legal scandals facing Prime Minister Benjamin Netanyahu, the Labor Party has taken a nosedive in the polls as possible early elections loom. 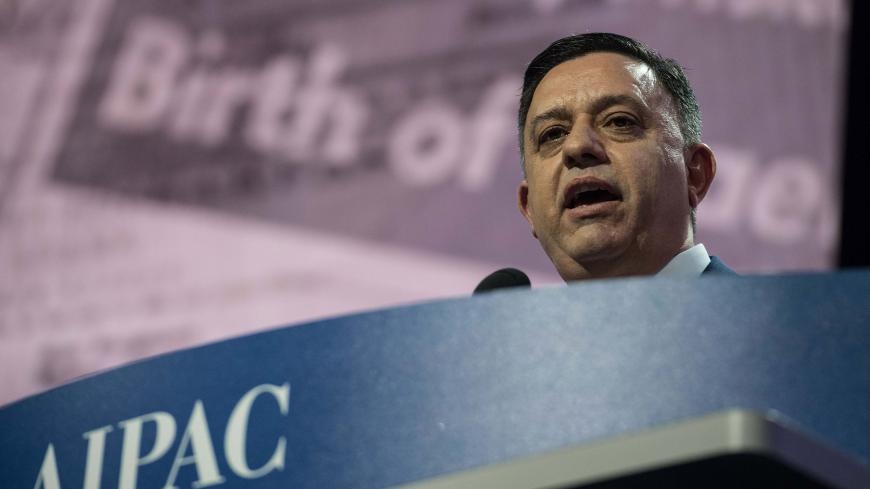 Labor Chairman Avi Gabbay is currently visiting Washington on the occasion of the American Israel Public Affairs Committee’s (AIPAC) annual conference. Gabbay’s tweet, directly from Capitol Hill, could not have better demonstrated the difference between his peaceful sojourn in Washington and the warfare waiting for him in Israel.

Gabbay tweeted about a successful meeting he held with Sen. Dick Durban, the Democratic whip from Illinois. “An important meeting for continued cooperation with the Democratic delegate for support for Israel,” Gabbay wrote, attaching a photo of the two in the midst of conversation. The tweet was one of a series of updates from his diplomatic tour in Washington that included a speech at AIPAC, meetings with decision-makers and interviews, but the hemorrhaging Labor Party he will return to will soon snap him back to reality.

As he was preparing for his speech at AIPAC, Channel 10 published a disastrous poll for the Zionist Camp (of which Labor is the largest partner), predicting 12 mandates for the list if elections were to be held now — half of its power today. While Yesh Atid headed by Yair Lapid is stable with 24 mandates and the Likud headed by Prime Minister Benjamin Netanyahu grows to 29 mandates despite his ongoing criminal investigations, Gabbay and his party are collapsing. Gabbay needs time to minimize the damage, to rebrand himself and try to regain the mandates he lost to Lapid. A head-to-head match with Netanyahu is out of the question right now.

Despite the tense situation, the Labor Party’s Knesset members are uncharacteristically silent, making no moves to depose Gabbay. According to the poll, most of them will not return to the Knesset after the next election, but they are quietly watching Netanyahu grow stronger.

Labor's former chairman, Knesset member Amir Peretz, who could have been predicted to be the first to publicly criticize Gabbay, is avoiding making waves even though he understands the significance of the situation as well as anyone. Peretz even backed Gabbay at the Sderot conference March 6, saying, “Gabbay made mistakes and he knows it. We are giving him a chance.” Former chairwoman Shelly Yachimovich, who supported Gabbay, is also keeping quiet. Still another former chairman, Knesset member Isaac Herzog, who serves as the chairman of the opposition, also remains loyal.

An external observer of the Labor Party and its leaders might see weakness and despair, certainly not the energy needed for an election campaign. Most of the Knesset members are busy calculating the chances that they would find a seat in the next Knesset if few are available to their party. After Gabbay uses his right to reserve seats for some “star players” and Hatnua Party leader Tzipi Livni takes her own reserved spot, there will hardly be any seats left.

With no possible heir with any chance of changing the situation, Gabbay is unconcerned with the risk of an ouster. Although he will return to a dispirited team that is worried for its future, Gabbay can expect quiet. However, he will still have to make a change in direction within a short time or face internal opposition.

“I truly can’t understand this phenomenon. The corrupt Netanyahu is gaining in the polls. Lapid, who I think is just a sham, accumulates power at our expense, and we collapse with Avi Gabbay, who is a man with impressive abilities,” a Labor Knesset member despaired to Al-Monitor this week on condition of anonymity.

According to another Knesset member, “Gabbay should have spoken at AIPAC but returned immediately when talk started in Israel about the possibility of early elections. I understand that he needs these photo ops portraying him as a statesman, but at this decisive political moment, he should have gotten on a plane and unified the ranks here. His tweets from Capitol Hill are disconnected.”

When Gabbay was elected chairman, he had an unusual opportunity. The public was excited about the new and refreshing figure. The polls flattered him and pulverized Lapid. Later, the party gave Gabbay inflated power and authority, enabling him to change its constitution. But the corporate management methods he brought with him clashed with the party mechanisms and the lawmakers he had excluded. His bald and awkward courtship of Likud members while abandoning the party’s base, especially his statement that the left has forgotten what it means to be Jewish, caused great damage and weakened him. Gabbay apologized for it in an interview to Yedioth Ahronoth, but the mandates that fled to Lapid haven’t returned.

Gabbay’s current strategy will focus on bringing back voters who have abandoned him and moved to Lapid. That means that very soon, a front will open in the center-left bloc between Gabbay and Lapid. A senior member of the Zionist Camp said on condition of anonymity, “The idea will be to expose Lapid to the public as a hollow figure who is enmeshed in the business of money in politics, as was revealed in the episode concerning his friend Arnon Milchan, and as someone who changes his story regarding his military service.”

Such an internal battle, a worst-case scenario, would serve Netanyahu and the Likud, especially in an early election. Gabbay and Labor need time to regain their relevance. And in this fight for survival, perhaps the most dramatic the Labor Party has experienced, the burden rests solely on Gabbay’s shoulders.