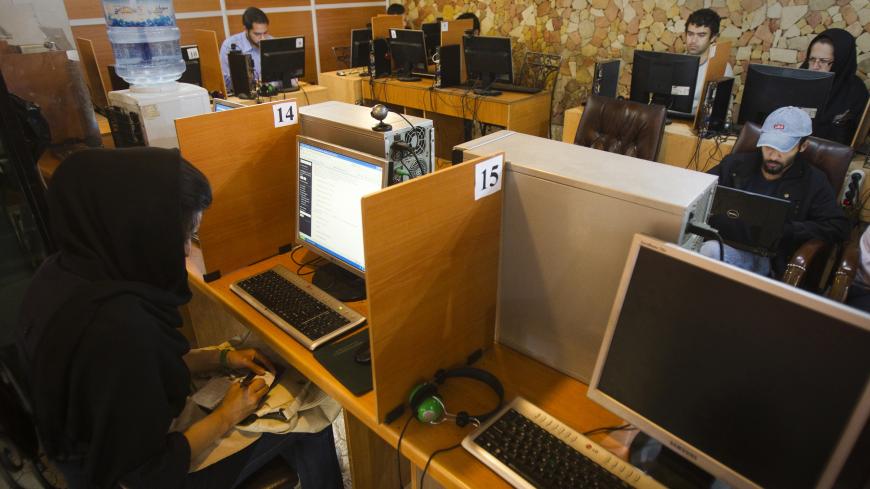 Customers use computers at an internet cafe in Tehran, Iran, May 9, 2011. - REUTERS/Raheb Homavandi

When Iran's Foreign Minister Mohammad Javad Zarif began his tenure in 2013, the American-educated diplomat knew that he would need to bypass many of the traditional media outlets to spread Iran's message directly on the international stage. At the time, there was no platform better suited for this objective than Twitter. There was only one problem. Since the 2009 protests, Twitter, along with Facebook and YouTube, had been blocked in Iran.

Zarif's use of Twitter via software to bypass Iran's internet restrictions was a clear and very visible admission by the government itself that the lack of online presence, particularly on Twitter, was detrimental to Iran's spreading its viewpoints on the world stage. With Zarif's entry, journalists and activists, mostly Reformists and moderates, quickly jumped in. Several years later, Iran's conservatives caught on to how important the platform was not only on the world stage, but also domestically.

In an interview March 28, Mehdi Mohammadi, a media adviser to former hard-line nuclear negotiator Saeed Jalili, spoke about the importance of Twitter for conservatives. "The talking point that Twitter is completely the environment of the enemy, has room for debate," said Mohammadi, who is now one of the leading political analysts on the right.

When asked his opinion on "revolutionary groups" (conservative voices committed to the principles of the Islamic Revolution) becoming active on Twitter, Mohammadi said, "At the moment, Twitter is the prime location for shaping movements. … Revolutionary groups must turn this threat into opportunity and must never pull themselves out of this influential arena that can publish the positions of the revolution and the views of the Islamic Revolution at the international level."

Mohammadi was also asked about the accusation in some circles that revolutionaries who are active on Twitter are engaging in a plot set by Zionists. He said, "This point is meaningless. It's like saying why do you resist [fight] in Tel Aviv?" He continued that when in an environment where there is a war "there is no wisdom in sitting aside." He added, "There is talent in entering the world of the enemy and learning how to fight in that environment."

Whether or not conservative voices will remain active on Twitter and other social media platforms, the debate over whether or not to keep these sites blocked is another matter. A number of officials, including President Hassan Rouhani and his administration, have supported lifting the restrictions. More conservative officials have argued in favor of keeping those sites censored.

The most recent comments on the blocking of social media sites has come from Iranian parliamentarian Abdulkarim Hosseinzadeh. In an interview with Iranian Labor News Agency, Hosseinzadeh, the head of parliament's Citizens' Rights commission, decried the state of the internet in Iran, which is ranked 150 out of 200 countries in internet downloading capacities. Hosseinzadeh said that while blocking internet sites may appear to be the quickest and easiest way to stop individuals who have ill intentions, in the long term, the cost of blocking these sites will be higher for the country.