A deadly train wreck this week spurred calls for improvements to Egypt's poorly maintained railway system and renewed discussion about a delayed increase in ticket prices. 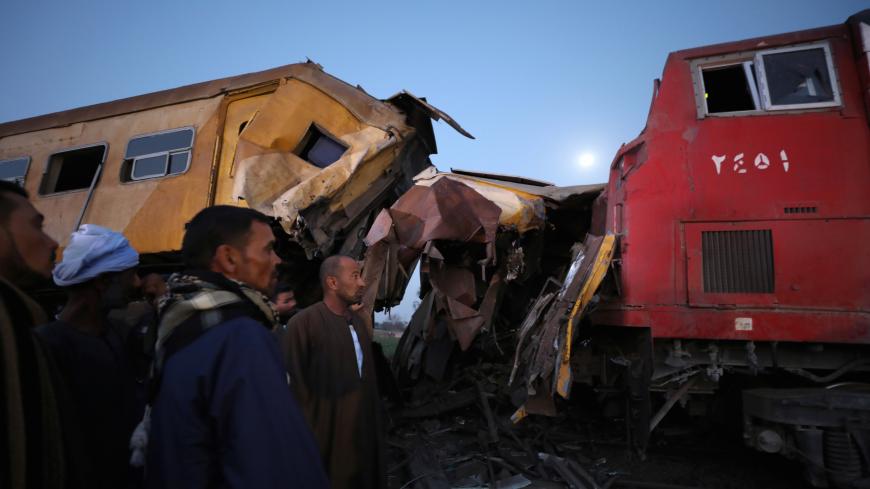 CAIRO — At least 12 people were killed and dozens of others injured in a Feb. 28 collision between two trains in Egypt's Beheira governorate. The tragedy reignited an ongoing debate over a postponed rise in train ticket prices and the urgent need to develop the neglected railways.

A price hike had been scheduled for early February, but Transportation Minister Hisham Arafat said in a Feb. 13 press statement that the increase was postponed to allow citizens, especially students, to buy subscriptions before the increase. The change now is set for the end of the school year in June.

Arafat said the hikes are needed to save the railway system from collapse. The National Railways Authority has incurred losses of 1 million Egyptian pounds (roughly $57,000) annually, largely because of rising fuel prices. Also, the debts accumulated by the railway for 20 years reached about 40 billion Egyptian pounds ($2.2 billion) in fiscal year 2016-17, which ended in June.

The increase will also help cover maintenance costs and spare part prices, which have risen with the liberalization of the exchange rate, the Transportation Ministry said in a Jan. 23 press statement.

“The increase in ticket prices aims to [provide] 800 million pounds [around $45 million] a year,” Arafat told Hona al-Asima TV in a show that aired in January. “The increase … is entirely related to improving the service. … The ministry will not be able to spend on railways if the situation remains as is for much longer.”

The railway system has a dismal safety record.

Youm7 newspaper reported that the increases will range from 15% to 50% for air-conditioned trains, 140% to 150% for regular trains and 15% for luxury trains. However, Assistant Transportation Minister Amr Shaath told Al-Monitor the ministry has yet to determine the official increase rates.

Shaath said the increase will not compensate for the railways’ 40 billion pounds in debts and 55 billion pounds’ worth of projects necessary to upgrade electronic signal systems. “If we want to have a proper railway, we need to save 100 billion pounds [around $5.6 billion]. The increase in the ticket price will not save this amount,” he added.

Ticket prices are calculated based on the number of kilometers traveled, starting at 1 pound per 25 kilometers for ordinary third-class trains tickets, which have not changed since 1999. Tickets for air-conditioned cars rose in 2015.

Railway expert and consultant Emad Nabil said that raising ticket prices will offset only between 7% and 10% of the authority's losses. “The increase will reduce the gap between revenue and expenditure, but it will not save the railways from collapsing,” he told Al-Monitor. “Other unconventional measures to save the railway sector should be put in place in parallel with the price hike.”

Unconventional measures, according to Nabil, include entrusting trains and stations to investors under a usufruct right agreement, allowing them to exploit the railway for a specific period. These investors would develop the stations, purchase the necessary spare parts, construct solar power plants and use the space on both sides of the railway for advertisements.

“The best way to exploit the revenue of rail tickets is to invest in the management of railways, in the sense of bringing foreign companies to manage the authority. Poor management is our main problem," Nabil added.