After years of placing investments elsewhere in the African continent, China is increasingly looking to Tunisia to serve as an ideal middleman to control passageways between North Africa and Europe. 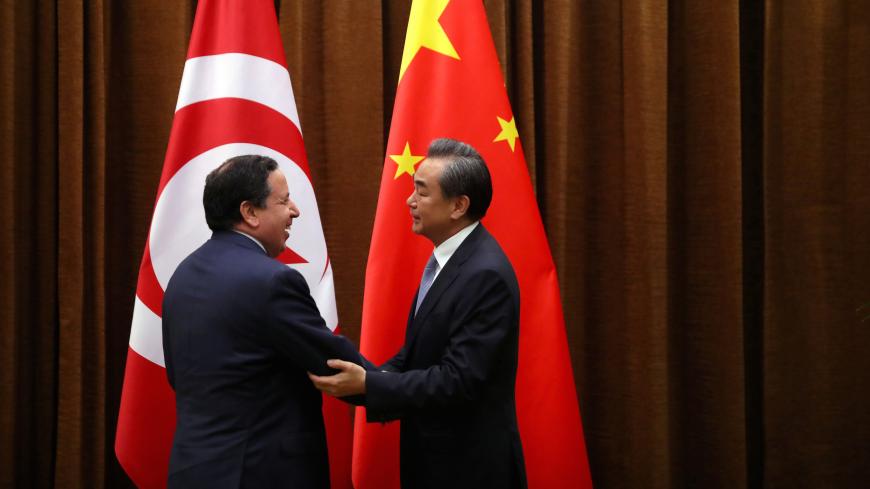 Tunisia's Foreign Minister Khemaies Jhinaoui and Chinese Foreign Minister Wang Yi shake hands as they pose for a photo before a meeting at the Ministry of Foreign Affairs in Beijing, China, July 19, 2017. - REUTERS/Mark Schiefelbein

In late 1963, Chinese Premier Zhou Enlai embarked on a whirlwind tour of 10 African countries. It was a strategic time to visit: The Cold War was raging, and newly independent countries across the African continent found themselves forced to choose between two camps, East and West. Algeria, Egypt and later Libya all swung toward the communist bloc. Unlike its near neighbors, Tunisia, then under the rule of secular nationalist Habib Bourguiba, chose a pro-Western political stance.

Though Zhou’s visit to Tunis ultimately resulted in the establishment of diplomatic ties between the two countries, tensions were high, with Bourguiba criticizing China’s handling of its territorial dispute with India and China's disapproval of the 1963 Partial Test Ban Treaty. Bourguiba went on to sharply tell Zhou that “harboring ‘common goals’ is not enough because different approaches could also ‘create distance’ between people.”

China didn’t need to be told twice. For most of the 1970s, it focused its economic diplomacy on South Asia and Southeast Asia, before moving into sub-Saharan Africa and Europe. In the past decade, Chinese investments in the African continent have increased tenfold. In 2015, Chinese president Xi Jinping brought forth an unprecedented era in Sino-Africa relations, promising over $60 billion in investment projects across Africa.

Only after China's energy policies dictated the country's involvement in the Middle East did Chinese leaders begin to pay attention to North African countries. Chinese investment in North Africa is “part and parcel of its growing share of trade and investment worldwide,” a paper published by the London School of Economics said in 2012. Indeed, China’s “One Belt, One Road” initiative is a modern reimagining of the ancient Silk Road. The ambitious project aims to be the world’s largest platform for economic cooperation — and North Africa is critical to the project.

As Chinese investment increased in other North African countries, their absence in Tunisia was noticeable. As late as 2015, there were few infrastructure projects bearing Mandarin characters such as those found in Algiers, no shops selling specialized Asian food products like in Cairo, and compared with the crowded streets of Marrakech, there were precious few Chinese tourists in Tunis.

But in the past year, China has been increasingly looking toward Tunisia. Projects in Algeria and Egypt have not been as successful as initially hoped, with delayed permits and declining oil prices stalling investments in Algeria. On the Algerian side, there is mounting frustration over imported labor. With more than 40,000 Chinese nationals working in Algeria, many government officials were concerned about the lack of progress being made on encouraging Algerian employment. Projects in Egypt have also been unsuccessful.

“For the Chinese, it’s a matter of looking for alternatives. In Tunisia they see opportunities — not so much in terms of the local development component, but vis-a-vis Europe,” Faten Aggad, the head of program of the European Center for Development Policy Management, told Al-Monitor by phone.

Though Tunisia is much smaller than its neighbors, with little in oil reserves or large-scale investment opportunities, it — along with Morocco — is the only relatively stable country in the area. Tunisia has deep ties to Europe, both through its colonial past and the ongoing negotiations for the Deep and Comprehensive Free Trade Agreement. Talks were launched in 2015 with the goal of better integrating the Tunisian market into the EU. In this sense, Tunisia functions as an ideal middleman for a China interested in controlling physical passageways between North Africa and Europe as part of the One Belt, One Road initiative. China is apparently interested in Tunisia’s Bizerte port, which offers easy access to Europe and is located at a critical hub of fiber optic submarine network cables.

China’s interest in Tunisia is mutually beneficial. With national inflation expected to reach between 9% and 12%, crippling IMF and government imposed austerity measures and a devalued dinar and high unemployment, Tunisia’s economy needs help. In a 2016 survey, Afrobarometer found that 47% of Tunisians believe China’s economic assistance is helping to meet Tunisia’s needs.

In an official visit to China in July 2017, Foreign Minister Khemaies Jhinaoui said Tunisia “fully supported” the One Belt, One Road initiative and was ready to be involved in projects. A month earlier, the two countries signed three agreements that would increase commercial cooperation; the agreements included plans to construct a 200,000 square meter (2.1 million square foot), $65 million commercial center in Tunis.

While China and Tunisia’s relationship could continue to grow, one of the biggest challenges will come from the EU. Some Tunisians are worried that as Tunisia’s biggest trading partner, the EU, and France specifically, could undermine a growing Sino-Tunisian relationship.

“It is a legitimate concern,” said Aggad, citing the rules of origin negotiation in the Deep and Comprehensive Free Trade Agreement. “Depending on the negotiated clause, Tunisians, for anything that they want to export — will need to have a certain percentage of the different parts of given products that has to be produced in Tunisia. Relying on sources such as China or pieces coming out of China to be able to develop a certain product that is eventually exported to EU will become problematic.”

For the moment, though, Tunisia remains optimistic that increased cooperation with China will boost the economy, alleviate unemployment and strengthen the country’s trade sector.