As US disengages in North Africa, France's Macron looks to boost his profile

During his visit to Tunisia, French President Emmanuel Macron vowed to bolster the country’s faltering economy. 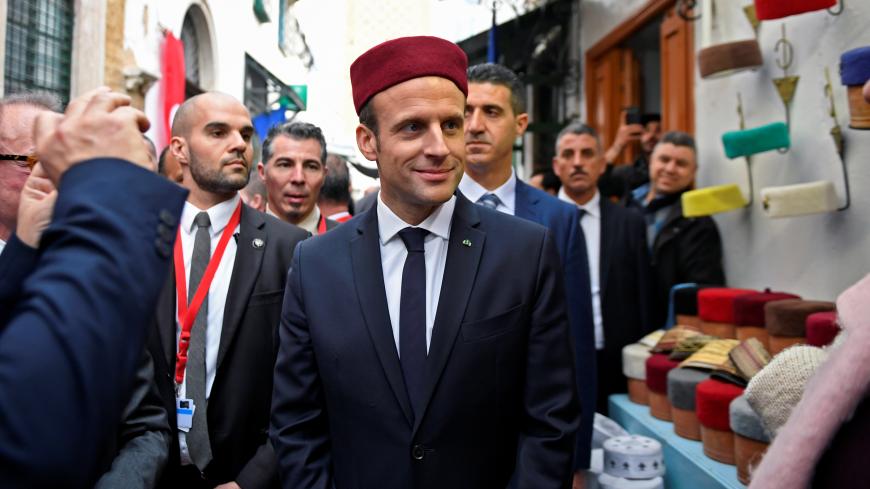 French President Emmanuel Macron wears a fez during his tour of the Medina (Old City) in the Tunisian capital of Tunis, Feb. 1, 2018. - REUTERS/Eric Feferberg

The two-day visit — Macron’s third to North Africa since taking office — was seen as both an attempt to lend support to Tunisia, a former French colony, and bolster his regional profile, which has been on the rise following the United States' disengagement from the Middle East and North Africa.

“Macron is trying to become a world leader,” Youssef Cherif, a Tunis-based political analyst, told Al-Monitor. “All his trips — not just to Tunisia — are related to this goal.”

He added, “Plus, Tunisia remains a symbolic country where quick wins are possible. The country is relatively small and has a functioning bureaucracy, a civil society/private sector that is still alive and hasn't been through the bloodshed other countries went through.”

During the visit, Macron announced plans to double France’s private sector investment in Tunisia over the next five years and pledged nearly $700 million in development assistance, including $62 million for young entrepreneurs.

While some were optimistic about the French president’s outreach, many said the trip was little more than symbolic and that Tunisia needs more than promises from European partners to address its economic downturn.

“Macron did not bring anything extraordinary,” Hafedh Ben Abdennebi, a Tunisian economist who teaches at IHEC Carthage, told Al-Monitor. “The biggest problem in Tunisia is that we still haven’t found a new and adequate development model for the country. … We need political stability in our own country before we start talking about cooperation with or initiatives from other countries.”

“If Macron's promises of investments and aid are fulfilled, then this can have a concrete impact,” Cherif added. “The problem is that very often, such promises remain pure rhetoric.”

Riadh, an artisan who works in Tunis’ Medina, where Macron made a publicized stop Feb. 1, told Al-Monitor that “the visit itself doesn't do us [artisans] any good,” adding that it would be “meaningless” if it does not result in economic progress or an upturn in tourism.

Such views are shared by many throughout the country who feel that little has been done to check widespread poverty and corruption seven years after the Jasmine Revolution.

In early January, these frustrations grew into nationwide protests after the introduction of tax hikes that caused the prices of basic goods to rise. Clashes between police and demonstrators resulted in hundreds of arrests and one death, while Human Rights Watch warned of police abuse and mistreatment.

Macron, whose visit came on the heels of that unrest, said during an interview with Tunisian newspaper Al Chourouk that he wanted to help “boost the economy and provide answers to the youth."

“We share the same values: those of democracy and respect for individual freedoms. I know that Tunisia is going through economic and social difficulties and that the road to a successful and functional democracy may seem long to some. But the dynamic is launched, and the will is there to make this trajectory irreversible,” Macron said during the interview.

But Macron’s efforts to strengthen Franco-Tunisian ties are also part of his broader ambitions in the region, said experts, who noted that he has played prominent roles in a series of hot-button regional issues during his brief time in office.

In November 2017, Macron received Lebanese Prime Minister Saad Hariri after the premier unexpectedly resigned his post while he was in Riyadh, Saudi Arabia. Hariri, who many believed had been pressured by the Saudi government to step down, announced his return days after Macron’s public support.

On July 25, just two months after taking office, Macron played host to Libyan Prime Minister Fayez al-Sarraj and Field Marshal Khalifa Hifter, the two protagonists in the country’s civil war. The landmark talks led to a cease-fire and a commitment to hold elections in the upcoming year. While Libya’s conflict rages on, Macron is seen as one of the few balanced Western leaders with influence in the negotiation processes.

Most recently, Macron weighed in on the issue of Jerusalem, expressing regret over US President Donald Trump’s “unilateral" recognition of the city as Israel’s capital. He was also reportedly asked by Tunisian President Beji Caid Essebsi to press for European recognition of a Palestinian state.

According to Cherif, it makes sense that France is taking more of a lead on world issues, given its political influence and military presence.

Its growing role also “coincides with American disengagement and Britain's isolation, as well as the German political crisis,” Cherif said. “In other words, [Macron] found an open highway.”

For Macron, it is crucial that France’s new era of foreign policy is guided by the principle of “independence.”

“France does not wish to be subjugated to anybody, and [wishes] to be able freely to make its choices and analyses,” Macron told Al Chourouk.

“But France is not an isolated power. It is part of a European whole which must raise its ambitions. I want a Europe that asserts itself in the world instead of being turned toward itself and obsessed by its small inner differences. … Without arrogance but with confidence,” Macron said.