The Tunisian government is embarking on a series of measures to persuade the European Parliament to back down on its Feb. 7 decision to add Tunisia to the blacklist of countries at "high risk" of money laundering and terrorist financing. 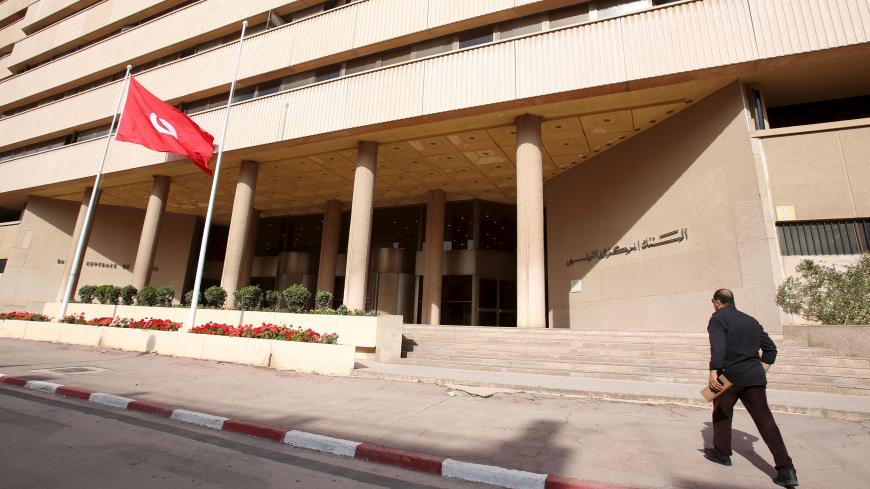 A man walks towards the Central Bank in Tunis, Tunisia, April 27, 2016. - REUTERS/Zoubeir Souissi

TUNIS, Tunisia — The European Parliament has added Tunisia to its list of countries at “high risk” of money laundering and terrorist financing. The Feb. 7 measure raised public and official discontent. Tunisia Central Bank Gov. Chadli Ayari submitted his resignation hours before a vote on his dismissal on Feb. 15. The following day, World Bank official Marouane Al Abbasi was appointed by the Tunisian Parliament as his successor.

Al-Monitor spoke with Sufian al-Sulaiti, the official spokesman for the public prosecutor's office of the Tunis Court of First Instance and the Anti-Money Laundering and Counter-Terrorism Financing Unit. He said that on Feb. 9, the Tunisian government referred to the court's five Central Bank officials suspected of being involved in money laundering cases amounting to 250 million euros ($305 million).

“The case implicated the head of the bank's Foreign Exchange Department and other cadres,” he said. “The five officials are accused of money laundering, bribery and misappropriation of public funds.”

“These economic and financial crimes are complex, requiring experts and specialized units to carry out the necessary investigation and research, which requires time,” he added.

The privately owned newspaper Al-Jarida indicated that the defendants had exchanged amounts in 5, 10 and 20-euro banknotes with 200 and 500-euro notes for what Al-Jarida described as “well-known” people to facilitate the smuggling and money laundering operations.

The Assembly of the Representatives of the People decided Feb. 22 to summon Prime Minister Yusuf al-Shahid to parliament for interrogation on the political, security and economic situation in the country, most notably the recent European Union classifications and the measures to remove Tunisia’s name from the EU blacklist as soon as possible.

In an official statement, the parliament's office said that the interrogation will take place between March 7 and March 15 upon the request of more than 74 members of parliament from different blocks, including the ruling parties.

The blacklisting of Tunisia came against the background of the inability of the European Parliament to overturn the decision of the European Commission of adding Tunisia, Sri Lanka and the Republic of Trinidad and Tobago to the blacklist of money laundering and the financing of terrorism.

In a press release Feb. 7, the European Parliament said, “Despite intense efforts by some [members of parliament], they failed to achieve the 376-vote absolute majority needed to reject the inclusion of Tunisia, … to the European Commission’s list of non-EU countries considered to have strategic deficiencies in their anti-money laundering and terrorist financing regimes.”

The press release continued that the “list is part of EU’s toolkit to protect itself against money laundering, terrorist financing.”

On Dec. 5, 2017, the EU had put Tunisia — along with other countries — on its tax haven blacklist but removed it from the list on Jan. 23 following a wave of official protests, diplomatic efforts and a local debate over the EU-Tunisia partnership agreement on a free trade area.

Meanwhile, the Tunisian Ministry of Foreign Affairs described in a Feb. 8 statement the decision by the European Commission as “unfair and hasty.”

The ministry said that the “European Commission, in the absence of a European financial assessment system, automatically adopted a report by the European Commission of the Middle East and North Africa Financial Action Task Force.”

The same statement expressed the hope that Tunisia would soon be removed from this list, in light of the Tunisian government's intensive efforts in terms of its national and international commitments and with the FATF.

Hamma al-Hammami, spokesman for the opposition Popular Front, told Al-Monitor, “The listing is unfair and confirms the severity of the economic and financial crisis in Tunisia and proves the failure by the ruling coalition led by Ennahda and Nidaa Tunis to address the country’s problems.”

He said, “The EU is acting based on its best interests and aims to impose its options on Tunisia, but the problem remains in the current governance system and its inability to deal with pressures."

Republican Party Secretary-General Essam al-Shabbi told Al-Monitor that the European Parliament decision is unjust. However, he noted that this does not negate the responsibility of the authorities and their delay in courageously investigating money laundering and terrorist financing suspicions.

“Regardless of the political and economic motives, the listing distorted the image of Tunisia abroad, whether at the political level or in terms of financial transparency,” he added.

Khalil al-Zawya, a spokesman for the opposition Ettakatol party, told Al-Monitor, “The Tunisian authorities should be bold enough to investigate the money laundering and terrorism financing case and lead diplomatic efforts to remove Tunisia from the blacklist.”

Zawya expected the listing to affect the already deteriorated economy of Tunisia, especially as the country seeks to open up to new global financial markets and partners.

“In the first years following the revolution, the authorities turned a blind eye to suspicious funding from smuggling networks that had entrenched a parallel economy fueled by money laundering,” financial expert Sadiq Jabnoun told Al-Monitor. “We hope this listing does not push the European Union to waive its support for Tunisia at all levels.”

The Tunisian Confederation of Industry, Trade and Handicrafts (UTICA) saw that the EU's decision to include Tunisia on its tax haven blacklist would have negative repercussions on Tunisia's relations with the EU and on Tunisia's reputation.

In a press statement Feb. 7, UTICA expressed its surprise at the decision, asserting it would harm Tunisia's image and undermine its successful democratic transition, foreign investments and sovereign ratings.

On the other hand, EU Ambassador to Tunisia Patrice Bergamini downplayed the importance of the listing in a Feb. 7 statement reported by local media, saying, “The Tunisian authorities were aware of it in advance.”

Bergamini added, “The European Parliament vote does not mean that Tunisia is involved in money laundering and the financing of terrorism. It means there are some legal gaps that must be fixed.”

It seems that the EU has been dealing Tunisia successive blows. Tunisians, however, will likely exploit the position of 357 members of parliament who rejected the recent listing.