Despite the risks of getting caught and tortured or killed, migrants still chance the route to Europe through Libya, where the volatile security situation can work in their favor. 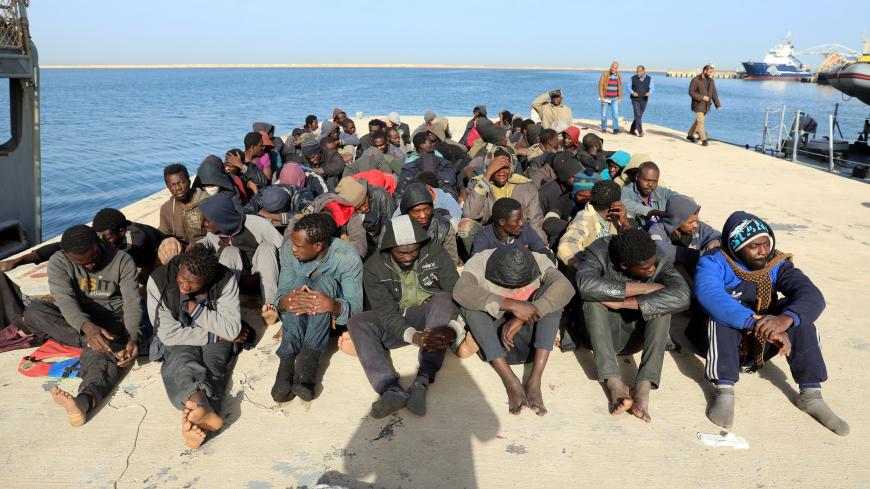 Migrants sit at a naval base after they were rescued by Libyan coast guards, Tripoli, Libya, Jan. 8, 2018. - REUTERS/Hani Amara

Despite the European Union and Libya cutting a deal last February to prevent people from making the perilous journey to Europe, over 3,000 migrants and refugees perished at sea in 2017. A year later, Libya holds thousands of migrants captive under terrible conditions while others still die at sea, according to an Oxfam report published Feb. 1.

As recently as Feb. 2, 90 people drowned after a boat capsized off the coast of Libya.

The danger at sea is matched by horrors on land. Oxfam interviewed 158 migrants who had been in Libya last August and found that 84% had been subjected to “degrading and inhumane treatment, extreme violence or torture in Libya,” while a further 74% had “witnessed people being murdered or tortured.” Oxfam gathered new testimonies in January from Sicily and found that little had changed.

Despite the danger, many migrants and refugees still head north to Libya for the chance to board a boat set for Italy. The majority are from sub-Saharan African countries, though citizens of South Asian countries such as Pakistan and Bangladesh are now entering Africa en route to Europe, too. They all hope to find refuge and work in Europe to build a stable life. Many people from countries like Ghana, Nigeria and Gambia see friends posting glamorous photos on social media of their new lives in Europe. But what they often don’t see is the appalling conditions their compatriots are subjected to if they end up captured in Libya.

“For now, the interference carried out last year in Libya by Italy — with the EU's backing — has indeed managed to reduce the number of migrants reaching Sicily,” Jalel Harchaoui, a doctoral candidate in geopolitics at Paris 8 University and a frequent commentator on Libyan affairs, told Al-Monitor. “However, in western Libya it is not an impeccable, tidy or sustainable success.”

Many of the migrants end up in prison. The African Union, EU and United Nations have worked for their release, “but they do not reach the majority of migrants stranded in Libya because Libyan authorities recognize only a handful of nationalities as deserving of international protection,” read the Oxfam report.

Others, particularly women, are in danger of being caught by human traffickers who force them into prostitution. To try to educate young people about the dangers of traveling through Libya, some of their compatriots who spent time in captivity in Libya have begun visiting schools to share their stories. Mabel Emmanuel, a 27-year-old Nigerian national, told CNN she was regularly beaten in prison while pregnant.

“I gave birth to my baby in prison, with tears,” she said. “Even though I was pregnant, they were still beating and maltreating me.”

A CNN report depicting the sale of Africans at an open-air market in Libya inspired major protests in Paris on Nov. 18 outside the Libyan Embassy.

These initiatives, launched by returning migrants who experienced kidnappings and jail in Libya in coordination with local governments, paired with intensified security operations, seem to be working in the short term. The number of people trying to reach Libya is decreasing, but there are still challenges.

“We’ve been doing our best to work with NGOs to educate the youth about illegal migration to Libya through the desert and subsequently to Italy,” M.K.B. Simpson, a Tripoli-based author and expert on migration and human trafficking, told Al-Monitor. “It is working but with the recent rise of the Libyan dinar against the dollar, some people have made up their minds to return.”

In 2015, the biggest entry point into Europe was Greece, with 850,000 migrants landing there. Many refugees and migrants from Syria, Afghanistan and other countries — often aided by human traffickers — would set sail from Turkey. The entry point became unviable, however, once Turkey and the EU came to an agreement to close the migration routes.

Last year, Italy tried to hammer out a similar deal with Libya. But the difference in Libya is that a porous border makes migration much harder to control — particularly in a country where there is no monopoly on government or military power and powerful armed militias roam with impunity. Nonetheless, Italian money has found its way to nonstate actors in Libya who have sought to hinder migration efforts.

“I think that the intensification of security operations and measures to contain migration in Niger and Libya are pushing human traffickers as well as migrants away from Libya,” Riccardo Fabbiano, a senior Middle East and North Africa analyst with the Eurasia Group, told Al-Monitor. “That said, it is still early to tell whether this will have an enduring impact on migration flows through Africa and where else these flows will go.”

With increased awareness of the dangers in Libya, other nearby routes are being sought out. Algeria and Tunisia have witnessed more ships leave their coasts on one-way trips to Europe recently. On Feb. 4, the bodies of 16 migrants were found near Melilla, a Spanish territory bordering Morocco. While these are thought to be new points of departure for many migrants and refugees, the likelihood that figures in those three countries could reach anywhere near that of Libya is unthinkable.

“The impression is that there is a trial-and-error process whereby migration flows try to adapt to the new hostile environment by diverting migrants to other potential departing points such as Morocco,” Fabbiano said. “However, Morocco is never going to be a suitable alternative to Libya — a more effective governance of the territory means that traffickers and migrants will never be able to use this country as a takeoff point on a large scale. Indeed, if you compare the few available statistics we have on Morocco, it is clear that the numbers are not even remotely comparable.”

Thus, Libya remains a volatile but available option for many trying to find their way to European shores. And as long as that's so, it seems migrants will live under the threat of ending up in Libyan prisons or as pawns for human traffickers and the militias that profit from the practice.

“It is important to note that there is no transparency, whether regarding the various detention centers or regarding the number of people who perish in Libya's desert. Nobody truly knows,” Harchaoui said. “One thing is 100% certain, though: There will be no durable end to Libya's migrant crisis — until and unless a robust, functional, noncorrupt state is built in that North African country.”