With provocation becoming the new media’s lifeblood, the Knesset’s ethics committee is struggling to chastise outrageous behavior by Israeli lawmakers. 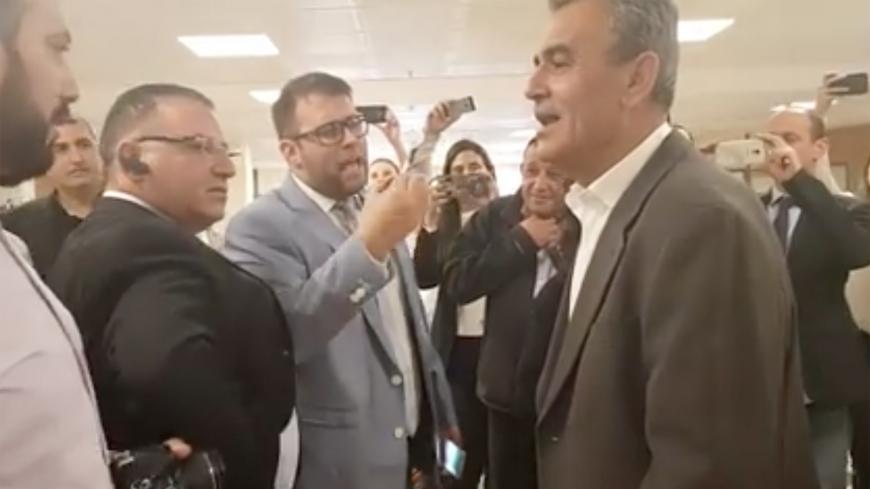 In a scandalous video, Likud Knesset member Oren Hazan confronted Arab Knesset member Jamal Zahalka (Joint List) in the Knesset’s press area Jan. 22. Hazan is seen using derisive language and crude gestures to prevent Zahalka from giving an interview. The recorded incident caused a stir across social networks. Hazan hurled verbal abuse at Zahalka: “Terrorist,” “nobody,” “criminal” and “floor rag” were just some of his choice terms. “We’ll throw you out of here! Your hands are stained with Jewish blood! Jerusalem is ours and will always be ours! We’ll let you pick weeds at best!” When the Knesset guard tried to remove him, Hazan started shouting at them too: “Why are you protecting him?”

The video documents some of the worst behavior ever seen in the Knesset. It seems obvious that Hazan planned his provocation and, as far as he is concerned, it was a huge success. Not only did he prevent Zahalka from being interviewed, he also won precious airtime — over five minutes, an eternity on television — on all TV channels on the same day that US Vice President Mike Pence addressed the Knesset. As if all that weren't enough for Hazan, he also posted the video on Facebook for his 110,000 followers.

Hazan’s horrific spectacle may have gone a step too far. On Jan. 31, the Knesset’s ethics committee decided to impose a dramatic and rarely used sanction. Hazan was suspended from debates in the Knesset’s plenum and committees for half a year and was docked a week of pay. The severe and unusual punishment that he received was the ethics committee's attempt to deal with a Knesset member who has turned the legislative body into a reality show, breaking all norms, crossing every boundary and ignoring long-established codes of conduct. In another example, in December, Hazan boarded a bus carrying the families of security detainees from the Gaza Strip and cursed them out in the harshest terms, calling them “insects” and “dogs.”

The Knesset always had its share of provocateurs. They were there in more formal times and are certainly present in the current Knesset, where squabbles and fights are a weekly occurrence. Nevertheless, there is no doubt that Hazan is an undisputed master of the art.

When he first entered the Knesset in 2015, the young politician — just 37 — was a complete unknown with just a few hundred followers on Twitter. He has since managed to create an online political empire. His account now has over 80,000 followers, and it and his Facebook page are brimming with provocative nationalist content against Arab-Israelis and Palestinians. In Hazan’s world, all means of selling himself are legitimate, even if it means bursting onto the red carpet to force US President Donald Trump to take a selfie with him during his visit to Israel. Nothing seems to embarrass Hazan. He doesn’t believe he can go too far. After all, he even took part in a reality TV show about weight loss. In his last Knesset speech before his suspension went into effect, he managed to call the speaker of the Knesset, Yuli Edelstein, “Stalin” and went on to promote the comment on social networks.

But Hazan wasn’t the only Knesset member to be sanctioned this week by the ethics committee. Knesset members Stav Shaffir and Michal Biran, both of the Zionist Camp, were also suspended for a week. Shaffir was punished for calling Likud Knesset Miki Zohar “corrupt,” and Biran for disparaging Hazan by calling him a “pimp.”

One reason the punishments made headlines is that the sanctioned Knesset members themselves waved them about in an attempt to win “likes” and increase their visibility on social networks. Given that benefit, it is doubtful that these sanctions will have any real impact.

In an interview with Army Radio Feb. 1, the chairman of the ethics committee, Yitzhak Vaknin (Shas), claimed that Shaffir brought a photographer to the finance committee to document her provocative remarks to Zohar, and there had been no prior interaction between them. Shaffir appealed her punishment, saying that it was unreasonable. In a Facebook post, she claimed that it is harmful to the people she represents in the Knesset. Shaffir, 33, is a popular figure on the internet, with 110,000 followers on Facebook.

In the same interview, Knesset member Vaknin added that he plans to dock the pay of Knesset members more often, explaining that he thinks it is the most effective way to stop the ongoing deterioration of the political discourse. He said that there is even concern that verbal provocations could devolve into actual fistfights. Regarding Hazan, Vaknin said that he never heard anyone speak that way in all his 22 years in the Knesset.

Meanwhile, Hazan retaliated by accusing the chairman of the ethics committee of supporting terrorism and launched a social media war against him. As far as Hazan is concerned, he came out on top. Vaknin sounds like he is fighting a losing battle against the new media that has made political discourse so coarse. Knesset members, particularly of the younger generation, realize that the way to make names for themselves is through documented acts of provocation. They know that news editors frequently search for the latest scoop by scanning politicians’ Facebook and Twitter activity, which have come to often replace traditional press releases.

Even older Knesset members are beginning to understand the power of social media and the internet. For instance, Arab Knesset members were removed from the plenum during Pence’s speech after waving signs reading “Jerusalem, capital of Palestine.” They had planned to do so two days earlier and expected to document it, hoped that the resulting video of them being removed would go viral, which is exactly what happened.

Going back to Hazan, he may have been suspended for half a year and lost a chunk of his monthly salary, but no harm has been done to his public visibility. He will continue to engage in direct dialogue with the public through his provocative actions on social networks, while the editors of TV news shows will continue to follow him.