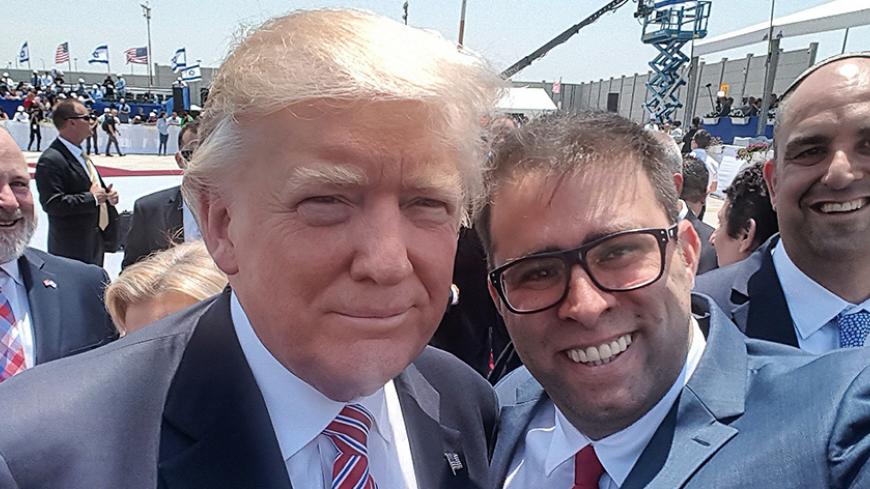 A selfie taken by Israeli lawmaker Oren Hazan with US President Donald Trump went viral, leading some to question the behavior of Israel's elected officials, Tel Aviv, May 22, 2017. - Facebook/orenhazanlikud

In 2010, Deputy Foreign Minister Danny Ayalon proposed to start a course in etiquette for Knesset members traveling overseas on official business or hosting high-ranking guests in Israel. Given his extensive and varied service in the Foreign Ministry, Ayalon wanted to give Knesset members lessons in the language of diplomacy, including dress codes, table manners and tips for informal conversation. Most of all, he wanted to teach them how not to embarrass their hosts (or themselves). The reason for this initiative was a series of embarrassing incidents that Ayalon believed had resulted from a lack of appropriate education and from the informal Israeli style, known in local slang as, “neighborhood style.”

The media covered Ayalon's initiative extensively, but it never really took off. Almost seven years have since passed. Politicians have come and gone. As for political decorum and diplomatic comportment, bad behavior has broken new records. The most recent example, which can rightfully be called the “most embarrassing incident of all time,” was when Likud Knesset member Oren Hazan imposed himself on Donald Trump, 45th president of the United States, to take a selfie.

Much has been said, and will yet be said, about the photo taken by the young Likud Knesset member, who rudely ignored the rules of protocol at the official welcome for Trump on May 22. The selfie went viral and was covered by media around the world. Hazan had scored another victory. By ignoring political decorum and protocol yet again, he earned himself endless interviews on local TV and websites. He used the opportunity to describe himself as the “Israeli Trump.”

Even when interviewers ridiculed Hazan, he remained self-confident (if not full of himself), claiming that Trump had cooperated with him, even if the president seemed stunned. Photos from the event show Prime Minister Benjamin Netanyahu grabbing Hazan by the arm in an attempt to prevent the incident. Yet Hazan merely deflected, arguing that the Prime Minister's Office invited him to the ceremony in the first place.

The incident infuriated Knesset Speaker Yuli Edelstein, who has spent the past few years waging a Sisyphean battle to preserve what is left of Knesset decorum. Since the 2015 election, Hazan has been his biggest challenge. Considered a joke at first, Hazan has become one of the best-known Knesset members. He is evolving into a cultural phenomenon and an icon of defiance against the media and everything official. He is a real man of this era, a product and purveyor of reality show culture and social networks.

Despite the rules of procedure established by the Knesset's Ethics Committee, Hazan began appearing on a reality show, “Restart,” on Channel 10. As part of the show, he was given a camera with which to document half a year of his day-to-day life. While his parliamentary activity has been negligible, the young Knesset member has received the kind of screen time that any other public figure would do almost anything to get. When confronted about this by the Ethics Committee, Hazan dismissed them by saying he wasn't aware of the rules.

On May 23, the Knesset speaker revealed that Trump was originally supposed to deliver his main speech in the Knesset, but that the venue had been changed after the government could not ensure that there would be no disturbances or provocative activities. The speech was therefore moved to the Israel Museum. “Because of five Knesset members for whom 20 seconds of imaginary fame is more important than the dignity of the Knesset, and because of them alone, the plenum was empty today. Sad,” Edelstein remarked.

As a result of the selfie incident, there have been calls to update and revise the current rules of procedure. The prime minister himself advanced the initiative when he instructed the director general of the Foreign Ministry, Yuval Rotem, to eliminate handshakes with the Cabinet during official receptions.

While Hazan was the star of Trump's reception, other ministers standing in the interminable line to greet the president also tarnished the decorum of the event. Internal Security Minister Gilad Erdan updated Trump about an incident in Tel Aviv that was briefly suspected of being a terrorist attack, even though the police, under Erdan’s own authority, had already announced that it was an accident. Other ministers just tried to get the president's attention, acting like groupies of a visiting rock star.

Netanyahu can also blame himself for the embarrassment. While the Americans requested a modest ceremony at the airport, he insisted on a full, formal event with the entire Cabinet in attendance. He ordered his ministers to be there, and his office even extended invitations to various local Likud officials based on Netanyahu's internal, political considerations.

The bottom line is that Hazan came out the winner. He received an invitation from the Prime Minister's Office, succeeded in infiltrating the receiving line, and got the publicity he wanted. Even if the rules of procedure are changed, it is too late to stop selfies and social media from infiltrating official events.

This new cultural norm, however, simply does not fit with official protocol or political decorum. Another sign of this is footage of a verbal disagreement that Likud Knesset members David Bitan and Mickey Zohar had with the parents of fallen soldiers during a Knesset debate over the report on the 2014 Gaza war. Nothing like it had ever been seen in the Knesset. It upset the stomachs of anyone who watched it.

In an age when everything is documented and immediately posted to social networks, and when reality and “fake news” are frequently conflated, the old rules of the game are becoming irrelevant and will eventually change and disappear. In 2013, Edelstein launched a tirade when he learned that a young Knesset member, Boaz Toporovsky of Yesh Atid, had posted a photo of himself on Facebook that was deemed too revealing. After a long night of voting, Toporovsky was photographed lying on a sofa in his Knesset office, covered only with his shirt. When complaints about a member of Knesset who “posed for a photo, as if he was in Playboy” began to flood Edelstein's office, the speaker revised the rules of behavior.

Facebook had already penetrated the realm of politics in 2012, especially among younger politicians. More and more Knesset members were seen taking selfies in the plenum, sometimes even while eating. Since Knesset sessions are broadcast in their entirety on the Knesset Channel, people were furious. They felt that it was an affront to the dignity of the institution and complained to Edelstein's office, forcing him to revise the rules. After Hazan's selfie, however, those incidents look like nostalgic memories of an age of innocence.