In wake of protests, Iranian officials call for large turnout to mark revolution

Following anti-government protests last month, Iranian officials are keen on a large turnout to celebrate the 39th anniversary of the 1979 Islamic Revolution. 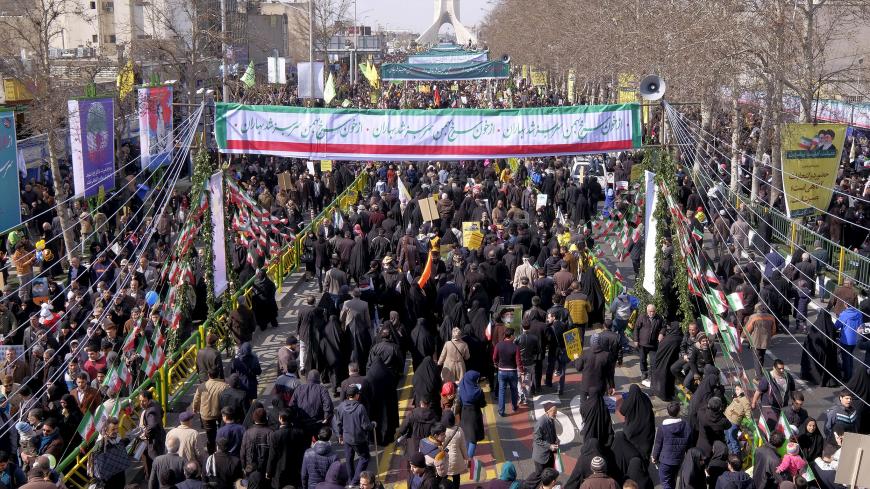 February 11 — 22 Bahman in Iran — marks the 10 days between the return of Ayatollah Ruhollah Khomeini to the country after 15 years in exile and the victory of the 1979 Islamic Revolution. Every year for the occasion, government-organized gatherings across the country rally conservatively inclined Iranians and a handful of unique characters who attend for the spectacle or to be the spectacle themselves. The rallies are an important opportunity for Iran's leadership to demonstrate the popularity of the Islamic Republic to both domestic and foreign critics. With Iran recently having been rocked by its largest protests in nearly a decade, officials of all stripes are calling for an impressive turnout.

During a Cabinet meeting Feb. 7, President Hassan Rouhani said, “At this rally, in creating a new epic, the will, solidarity, unity and commitment to national sovereignty must be shown, and to those who wish ill on Islamic Iran across the world, we must say that the path of Imam Khomeini still continues.” He added, “[I am] happy that after the 39th anniversary of the victory of the Islamic Revolution, and on the threshold of the 40th anniversary of the Islamic Republic of Iran, that the people of Islamic Iran are continuing on the path of the goals of the revolution with more strength and enthusiasm.” He asserted that a large turnout would “for months disappoint the enemies” of Iran.

In an indirect reference to the recent protests, Rouhani said that this year’s rallies will be especially significant, stating, “In the last few months, enemies with incorrect calculations designed plots against Iran.” Therefore, he said, “With more determination than previous years, we must show our decisive support for our culture and religion and our goals for the revolution.”

Rouhani did not specify what “incorrect calculations” hostile governments had made. He, however, mentioned Iran having stopped terrorists who had entered the country, likely meaning the arrest of Islamic State fighters who had entered western Iran in January. He also said that the UN Security Council and major powers had rejected a plan by the United States against Iran, a reference to the desire of the Donald Trump administration to scrap or at least renegotiate the nuclear deal.

The rallies on 22 Bahman are often peppered with anti-Israel statements. During his Cabinet speech, Rouhani said that there have been “innumerous plots against the Islamic world” in the last year, referring to Trump’s decision to recognize Jerusalem as Israel’s capital. He remarked that a large turnout would represent a “firm and strong response to the plots.”

Mohammad Ali Jafari, leader of the Islamic Revolutionary Guard Corps, also called for a large turnout, proclaiming that those who attend the 22 Bahman rallies show the country’s enemies their commitment to the Islamic Republic. Senior clerics in Qom and the head of the judiciary, Ayatollah Sadegh Larijani, also encouraged Iranians to attend the events.

It is not clear to what degree these public calls will motivate Iranians to celebrate a nearly four-decade anniversary, especially so soon after the protests, whose slogans were harsh. While the protests quickly died down, their causes — economic concerns and corruption — persist.