Turkey in 2018: The war of the presidents

Turkish President Recep Tayyip Erdogan sees his predecessor, Abdullah Gul, as a rival and potential threat to his authority in the coming year. 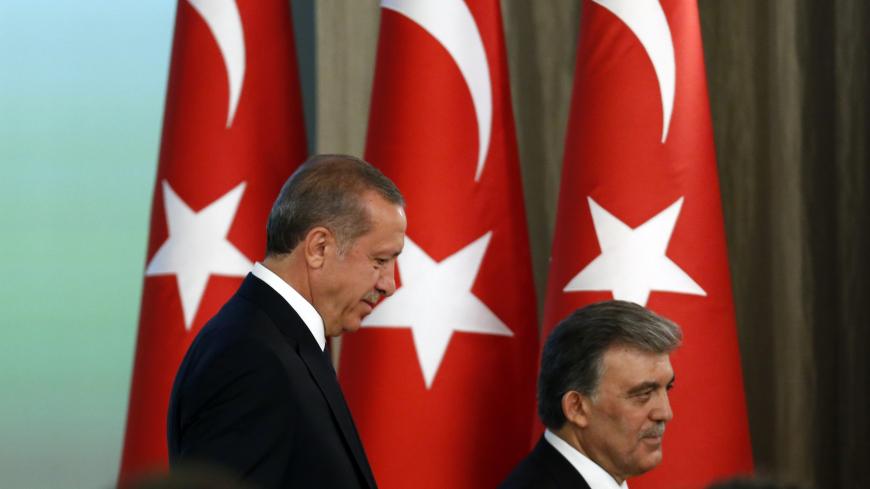 For those who know Turkey’s President Recep Tayyip Erdogan and his predecessor Abdullah Gul, a war between the two should not come as a surprise. The only mystery was its timing, and now we know it has just begun.

Deliberately keeping his distance from Erdogan, Gul has issued some critical but cautious statements against the current president's practices for some time now. Yet the declaration of war came when Gul issued a statement that was critical of a new emergency decree that critics say grants impunity to civilians who go after Erdogan’s opponents.

Fully equipped for the war, Erdogan has now invited Gul to engage in conventional warfare. Gul, on the other hand, is well-aware that the war imposed upon him is asymmetrical and that Erdogan can be ruthless when it comes to burying rivals. Therefore, it seems that Gul would prefer a guerrilla war with hit-and-run tactics. Given the uneven balance of power between the two, Gul's choice may be legitimate.

Perhaps this is exactly why Gul's modus operandi in this war hasn’t impressed anti-Erdogan circles. Indeed, some leftists and liberals are as angry at Gul as they are at Erdogan supporters. Timur Kuran, a Turkish-American professor at Duke University, is one such individual. “Abdullah Gul will probably be remembered as the Neville Chamberlain of Turkish politics. He spent the past decade appeasing Erdogan, missing every chance to stop the destruction of Turkey’s democracy. To regain credibility, he’ll need to do much more than whisper mild discomfort,” Kuran said on Twitter, echoing the feelings of those who have high hopes for Gul.

Yet, in this equation, the most important question is how Erdogan sees his rival. And for Erdogan, Gul constitutes a critical and actual threat to his rule. All those familiar with the background of the feud can attest to the validity of Erdogan’s worries. The two have never had a camaraderie but instead have been forced into a relationship due to converging interests.

Gul, 68, and Erdogan, 64, were members of the same right-wing student union. Coming from an academic background, Gul made his debut in Turkish politics in 1991, when he served as a member of parliament for the right-wing Welfare Party. Erdogan, coming from a working-class background, belonged to the same political party and was elected as mayor of Istanbul in 1994.

As he continued to establish a personal network within national and international Islamist circles, Gul also joined the Parliamentary Assembly of the Council of Europe in Strasbourg, France, thus initiating his burgeoning ties with Western institutions. Years later, he said that the council was a “school of democracy” for him. Gul also served as a minister of state and government spokesman during a short-lived coalition government in the late 1990s, thereby gaining knowledge of the structure of the Turkish state and the bureaucratic functioning of the capital.

Erdogan, on the other hand, became a member of the Turkish parliament in March 2003, and almost one week later he took over the premiership from Gul. In a way, Erdogan parachuted into Ankara politics. He had to work in an unfamiliar bureaucratic environment with a staff handpicked by Gul, including figures like adviser Ahmet Davutoglu and economy czar Ali Babacan.

Even today, Erdogan works with individuals who once belonged to Gul’s inner circle. For example, Hakan Fidan, chief of Turkey’s intelligence agency, was among Gul’s men. Chief of Staff Gen. Hulusi Akar was a high school friend of Gul's.

Gul and Erdogan again crossed paths in 2001 as Reformists in Turkey's Islamist movement. Gul joined forces with Erdogan, as well as with then-parliamentarians Bulent Arinc and Abdullatif Sener, to establish a conservative democratic party similar to European Christian democratic parties. While Gul was the principal founder of the party, Erdogan was its charismatic leader who had unmistakable mass appeal. From the beginning, Erdogan has been considered a primus inter pares — a first among equals — of the quartet, yet Gul has always trailed behind.

Gradually, Erdogan became the foremost leader. Gul kept his grudges mostly to himself, thanks to his self-control, but he revealed his displeasure over Erdogan’s one-man tyranny in private conversations.

Contrary to general perception, Gul knows very well that Erdogan did not endorse his presidency in 2007. Back then, I was among those journalists who were told by Erdogan’s inner circle that Gul was not his first choice.

The two have experienced many disagreements over the last decade, ranging from domestic matters to foreign policy, mainly on Syria. In Gul's private conversations — some of which I was privy to — he complained about the end of the “successful Turkish example” of a model of democracy and Islam. Recalling the democratic reforms Turkey implemented during the first years of the Justice and Development Party rule, he indicated that Turkey's transformation was being hailed as a “silent revolution.”

Nevertheless, the bad blood between the two men has always been kept under control, as both knew it was impossible to contain their differences. Yet Erdogan, who is aware that 2018 will be a crucial year for the 2019 elections, wants to eliminate his most credible rival. That’s why he gave the signal and the media under his control, along with his troll army, have mobilized against Gul.

Now, the war of Turkey’s presidents has been declared. Will undefeatable Erdogan once again prevail against his most formidable challenger? Or can Gul pose a real challenge? The destiny of Turkey hinges upon the answers to these questions.

“Erdogan invites Gul to a duel and Gul limits himself to firing arrows from afar,” Amberin Zaman writes in her Al-Monitor column, quoting a well-known conservative intellectual. “Some pollsters agree that Gul could win back the presidency, yet as one argued, ‘The greatest risk remains Gul’s aversion to risk-taking and that he could buckle under further pressure from Erdogan. He wants the keys [of power] handed over to him without taking the slightest risk.'"

For those familiar with the strategies of Erdogan and Gul, the above observation indicates how the war of the presidents will unfold. Erdogan will be the bully, and Gul will be the soft-spoken, hesitant chess player.

But the most critical question is: Who will be the winner? Multiple factors, from the economy to international developments, will help determine the answer. This will be the most important Turkish "war" to monitor in 2018.