Dominos start to tumble in Tunis

Several political parties in Tunisia have revoked support for the Carthage Document in what could be the first signs of the national unity government's collapse. 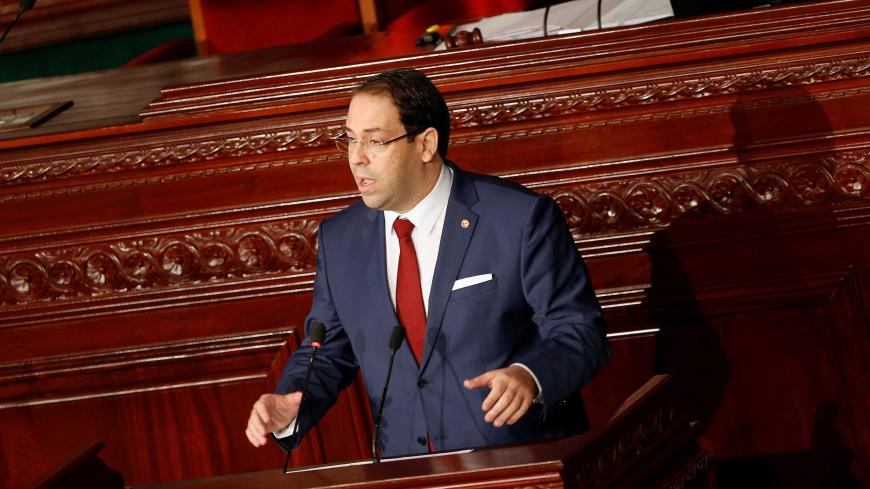 TUNIS — The national unity government in Tunisia threatens to collapse amid dwindling political support, with the Republican Party, the Afek Tounes Party and the Machrou Tounes movement backtracking on the Carthage Document Jan. 18. This document was the basis upon which the national unity government, headed by Youssef Chahed, was formed. Meanwhile, the Free Patriotic Union, which had previously withdrawn from the document, has now decided to renew its support for it.

The Carthage Document is an agreement over the priorities of the government signed in July 2016 by the state-affiliated Tunisian General Labor Union (a trade union); the Tunisian Union of Industry, Trade and Handicrafts (UTICA); the independent Federation of Farmers and several political parties, notably Ennahda, Nidaa Tunis, the Machrou Tounes Movement, the Free Patriotic Union, Afek Tounes, the Republican Party, the Social Democratic Path, the People's Movement and the National Destourian Initiative.

According to the document, the priorities of the national unity government are “winning the war on terror, accelerating growth, creating job opportunities, combating corruption, establishing good governance, setting urban and communal policies, supporting governmental effectiveness and completing the centralization of institutions.”

Mohsen Marzouq, the secretary-general of Machrou Tounes, told Al-Monitor, “Both the path of national unity and the Carthage Document are lost. The government of Ennahda and Nidaa Tunis is failing to provide solutions to the country.” He stressed, “The national unity government has only a few days left, and we shall not be in alliance with it ever again.”

Marzouq announced Jan. 18 that his party withdrew from the Carthage Document and withdrew its support for the government, adding, “The path of the national unity government is about to end."

Machrou Tounes, the Republican Party and Afek Tounes stopped working with the national unity government after they were excluded from several meetings, including those that determined the controversial 2018 budget, which cut subsidies and increased prices effective Jan. 1.

However, the Free Patriotic Union, which participated in those meetings, announced a new alliance with the government after having left it in 2016.

Mehdi al-Ribai, a member of Afek Tounes’ political bureau, told Al-Monitor, “The decision to leave the national unity government and the Carthage Document was not a political maneuver in preparation for the upcoming elections.” He explained, “The decision to withdraw was due to the lack of political will to carry out the reforms stipulated by the document, which has lost its effectiveness and should be shredded.”

Ammar Amrousie, a leader in the opposition Popular Front, told Al-Monitor, “We have already called for demonstrations and early elections,” adding, “The decision to withdraw from the Carthage Document shows the political class’ conviction that the national unity government failed to manage public affairs based on the Carthage Document.”

Zuhair al-Maghzawi, the secretary general of the People’s Movement affiliated with the Popular Front, told Al-Monitor that the movement refused to participate in the Jan. 13 meeting held between Tunisian President Beji Caid Essebsi and signatories of the Carthage Document, “as such a meeting is futile without the prime minister, who is responsible for implementing proposals.”

He said the movement did not attend the meeting because the ruling coalition was behind the increasing prices and taxes. Also, he said, the government is accusing the opposition of being behind the riots and vandalism during the protests over the 2018 budget.

“The government has lost its moral and political credibility, and we have no choice but to be in the opposition,” Maghzawi added.

Asked to comment on the withdrawal decisions, Abdelkarim al-Harouni, the chairman of Ennahda’s Shura Council, told Al-Monitor, “We believe the government still enjoys parliamentary support,” noting, “The withdrawals resulted from the withdrawing parties’ inability to deal with the economic crisis plaguing the country, as they focus on the municipal elections that will be held in May." He added, "The government does not work under threat. The Carthage Document was the fruit of a dialogue. It is still valid, and the priorities it lays out must be implemented.”

Harouni said, “Ennahda remains committed to the Carthage Document and continues to support the government.” He went on, “The political parties must prioritize the interests of the country over their own. The government of national unity has the courage to take structural steps to revive the national economy.”

The secretary-general of the Tunisian General Labor Union, Noureddine Tabboubi, supports the government’s position and considers that instead of replacing it, the solution to the current crisis lies in meeting Tunisians' demands for development and jobs.

Tabboubi added in a Dec. 29 statement to Tunis Afrique Presse, “The union does not support the government per se but is in favor of political stability and whoever can propel Tunisia forward.” He pointed out, “Democracy cannot succeed when the law is not applied to all citizens and when criminal justice is absent.”

On Jan. 18, Samir Majol, the new head of the UTICA, which lobbies for the business interests of its members, renewed his support for the Carthage Document and the government of national unity after the body's former head, Wedad Beshmawi, had threatened a series of strikes affecting private companies and a withdrawal from the Carthage Document.

Abdul-Jabbar al-Madouri, a media and political analyst, warned in a statement to Al-Monitor that such withdrawals will have severe repercussions for the government. “This move is like a rift that strips the government of its identity,” he said. Madouri added, “In the event the internal political dispute lingers, I am afraid more parties will go in the same direction as the Afek Tounes Party, the Republican Party and the Machrou Tounes movement. In such a case, the withdrawal of those parties will serve as a prelude to the collapse of the national unity government amid the tough conditions plaguing the Tunisian economy.”