Threats by US President Donald Trump to cut aid to the Palestinian Authority endangers the so-called Dayton Force and their security coordination with Israel. 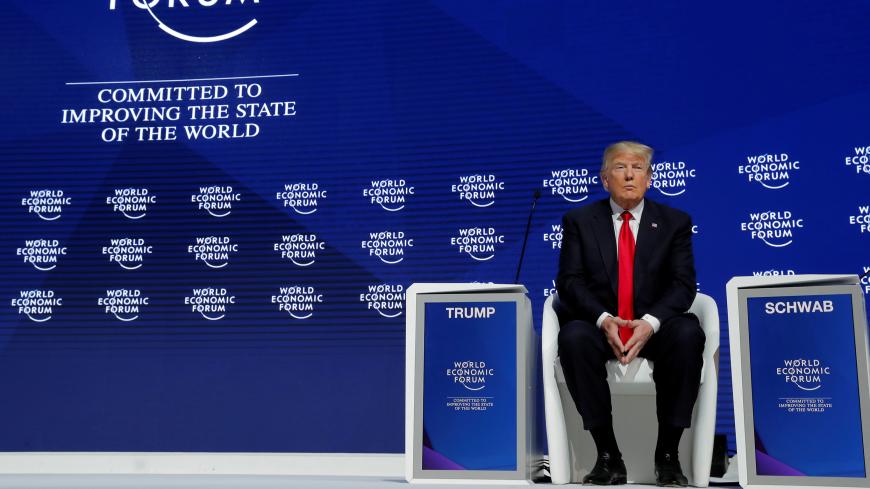 US President Donald Trump and Vice President Mike Pence recently made Israeli Prime Minister Benjamin Netanyahu very happy. Most members of the governing coalition cheered as Pence stood at the Knesset podium Jan. 22 and promised that the US Embassy would be moved to Jerusalem by the end of 2018. Apparently Pence did not notice the failed logic of his speech when he called on the Palestinians to come back to the negotiating table. Not only were the Palestinians boycotting his visit, but ever since Trump’s Dec. 6 declaration recognizing Jerusalem as Israel's capital, they have been unwilling to meet with the president’s envoy to the region, Jason Greenblatt, despite the high esteem and affection he had earned during months of preliminary meetings leading up to an anticipated renewal of negotiations.

As the crisis intensified, Trump met with Netanyahu at the World Economic Forum in Davos on Jan. 25 and further exacerbated the rift between the Americans and the Palestinians. “They disrespected us a week ago by not allowing our great vice president to see them, and we give them hundreds of millions of dollars in aid and support. That money is not going to them unless they sit down and negotiate peace,” said Trump. He then added, “Israel does want to make peace, and they [the Palestinians] are going to have to want to make peace, too, or we aren't going to have anything to do with them any longer.”

Netanyahu just stood there and smiled. He had nothing to add. When it comes to delegitimizing the Palestinians, he now has someone to do the work for him.

Shortly after the Davos meeting, US Ambassador to the United Nations Nikki Haley left the Palestinians with no illusions about the direction the United States will be taking in the future, as long as Trump is in the White House. “He [Palestinian President Mahmoud Abbas] insulted the American president. He called for suspending recognition of Israel. … We will not chase after a Palestinian leadership that lacks what’s needed to achieve peace,” she said angrily on Jan. 25.

The only question now left is what kind of sanctions the Americans will impose on the Palestinian Authority (PA). Based on the remarks by Trump and Haley, it looks like they will focus on the economic aid that the United States provides the United Nations Relief and Works Agency, which goes toward Palestinian refugees.

Last year, Congress approved $363 million in aid to the Palestinians. In some years during the last decade, the annual aid package to the Palestinians amounted to almost half a billion dollars, or one-sixth of the PA’s total yearly budget of $3 billion. The Palestinians have no way of making up such a cut to their budget if Trump follows through with his threat.

While last year’s figures show a potential for expedited economic growth, it is impossible for the PA to impose new taxes, especially given that one-quarter of the Palestinians under its control suffers from poverty and unemployment. That is why about one-third of the PA’s budget comes from donations from the United States and the European Union. Two years ago, Palestinian Prime Minister Rami Hamdallah announced that donations from Europe had declined considerably. Foreign aid, which once totaled $1 billion, dropped to $700 million, with the United States as the biggest donor.

A little less than one-third of the PA’s budget, or about $1 billion, is used to fund its security forces. With the signing of the Oslo Accord on the White House lawn in 1993, the United States granted economic support to the PA so that it could stand firmly on its own two feet. The aid level dropped during the second intifada (2000-2005), but rose after the uprising ended. President George W. Bush instructed that aid money be directed primarily to maintaining the Palestinian security forces, which were devastated by the Israeli military during the conflict. Bush made the rehabilitation of the armed forces a top priority to ensure that the Abbas regime maintained power and that the money would not find its way into the private bank accounts of officials in a government wracked with corruption.

The task of overseeing rehabilitation of the Palestinian forces was given to Gen. Keith Dayton, who trained the new recruits in camps in Jordan before sending them to fill posts in the Palestinian territories. For five years, from 2005 to 2010, Dayton succeeded in building a police and internal security network consisting of distinct units organized in a hierarchical structure. The main mission of the “Dayton Force” was to restore law and order to the Palestinian territories, but it also had another mission: protecting Palestinian institutions from threats posed by Hamas and other radical Islamic organizations. Although the forces failed to defend Gaza against Hamas in 2007, it is undeniable that since they were established, law and order has been maintained in those areas of the West Bank under Palestinian security control. They serve as a deterrent to internal threats posed by rival Palestinian organizations.

Trump’s threats pose a real risk to the continued operation of these security forces and security coordination with Israel, which has proved its effectiveness and resilience even in times of crisis. As one senior Palestinian security official told Al-Monitor, if Trump goes through with his threats — and he seems intent on doing so — Israel will also bear the bitter consequences. Not only will it put an end to security coordination, the source said, but it will also cause unemployment to skyrocket in the West Bank. This would portend severe implications for Israel.

As of this writing, Dayton has not voiced any criticism of Trump’s threats. He resigned his commission in 2010 upon completing his assignment to rebuild a stable and effective security force for the PA. Perhaps some protest from the American general will convince the current administration not to go through with its threats, thereby sparing the harm it would cause to Israel and the Palestinians alike.