Israel recognizes UNRWA’s role in preventing starvation in Gaza, so it cannot openly endorse the Trump administration's apparent desire to cut aid to the organization. 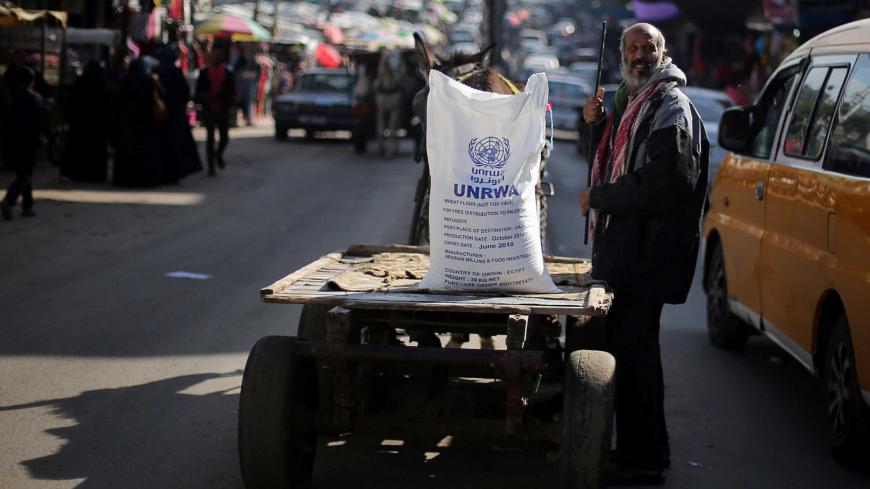 A Palestinian man stands next to a cart carrying a flour sack distributed by the United Nations Relief and Works Agency in the Khan Yunis refugee camp in the southern Gaza Strip, Jan. 3, 2018. - REUTERS/Ibraheem Abu Mustafa

“Israel shares a convoluted and ambivalent relationship with UNRWA [United Nations Relief and Works Agency for Palestinian Refugees in the Near East],” a civil administration source told Al-Monitor, speaking on the condition of anonymity. “On one hand, Israel views UNRWA as an entity that serves to camouflage Hamas terror acts, since Hamas exploits UNRWA facilities for its own purposes. On the other hand, people in Israel understand that without the agency, the entire Strip would become a humanitarian disaster site.”

The UNRWA dilemma has haunted Israel since Hamas took control of Gaza in 2007. The main question is how does one deal with an organization that averts a total collapse of the Gaza Strip, thus allowing Hamas to direct its resources toward terrorism instead of toward humanitarian aid for residents?

The dilemma grew more pointed after Nikki Haley, US ambassador to the United Nations, issued a warning, asserting that the Donald Trump administration will halt monetary aid to UNRWA. This warning came after President Mahmoud Abbas’ refused to conduct negotiations with Israel under US mediation after Trump recognized Jerusalem as the capital of Israel.

Israel is “fed up” with the relief agency, mainly because of what is viewed as UNRWA’s tacit acceptance of the way Hamas exploits UNRWA institutions. Maj. Gen. Yoav Mordechai, head of Coordination of Government Activities in the Territories, has often criticized UNRWA workers. He claims that they steal raw materials and other essential resources that Israel allows to be brought into Gaza for humanitarian purposes. Also, Mordechai says, UNRWA staff turn their heads while Hamas digs tunnels under schools operated by the agency. In June 2017, Mordechai disclosed that Hamas had dug a tunnel under a school in northern Gaza. He also accused Hamas of using pupils as human shields and upbraided UNRWA leaders and staff for not preventing the digging of tunnels despite the danger it poses to the schoolchildren.

Four months later, in October 2017, the heads of UNRWA reported that they had discovered a tunnel that had been dug under one of the agency's schools. They said they had adopted steps to make the school grounds safe and had halted studies for 10 days.

In the first visit by UN Secretary-General Antonio Guterres to Israel in August 2017, Mordechai revealed information about UNRWA-Hamas relations. Mordechai protested that the aid organization allows Hamas to exploit all UNRWA humanitarian assistance channels in order to harm the security of the State of Israel. Despite lodging sharp protests, Israel did not threaten to halt the organization’s activities in Gaza. It also did not consider making it more difficult for UNRWA to bring in equipment, raw materials and energy products.

UNRWA distributes basic foodstuffs, including flour, rice, sugar and oil, to residents of the Palestinian refugee camps. “There is no exact information regarding how many [Gaza] residents live off UNRWA’s foodstuffs,” the civil administration source told Al-Monitor. “But according to data published by UNRWA, we can definitely say that at least half of the Gaza Strip residents rely on the foodstuffs distributed by the organization — some partially, others fully.”

UNRWA was established in December 1949. Unlike the objective of the UNHCR, which is to rehabilitate and integrate refugees in the countries in which they live, UNRWA perpetuates the condition of the refugees in Gaza. That UNRWA in Gaza takes care of hundreds of thousands of refugees, whose numbers increase from year to year, allows Egypt, Israel, the Palestinian Authority (PA) and Hamas to absolve themselves of responsibility toward this population.

From the Six-Day War in 1967 until the Israel Defense Forces (IDF) withdrew from Gaza in August 2005, UNRWA filled the gap, providing basic services and decent living conditions. The Israeli civil administration in Gaza did not have to worry about feeding the numerous needy mouths in Gaza. UNRWA did the work. This arrangement was also convenient for the PA after its establishment in 1994, as well as for Hamas after the movement took control of Gaza by force.

Subsequent to the Hamas coup, the closure of Gaza and the territory's economic collapse, the dependence of Gaza residents on UNRWA became absolute. Thus, under such circumstances, it is clear that should US aid to UNRWA come to a halt, the result would be system-wide failure in Gaza and a security problem for Israel.

On Jan. 2, Haley explained to journalists that Trump does not want to continue to underwrite UNRWA so long as the Palestinians refuse to come to the negotiating table. A short time later, Trump himself tweeted, “With the Palestinians no longer willing to talk peace, why should we make any of these massive future payments to them?” Although Trump did not mention UNRWA specifically, the reference was clear.

UNRWA leaders, who already have great difficulty meeting the demand for foodstuffs in Gaza, are concerned and worried about Haley's and Trump’s comments. Their feelings are shared by the PA, Hamas and even Israel. So long as there is no alternative to UNRWA, no one wants it to disappear.

One of the nightmare scenarios that arose in IDF discussions of the issue is that of thousands of hungry Palestinian residents marching toward the Erez Crossing. Such a scenario could become a reality if Trump actually stops funding UNRWA and, as a result, people in Gaza begin to starve.

In recent weeks, Israel has been finding it difficult to put a stop to a drizzle of rockets being fired at it from Gaza. Under such circumstances, putting pressure on UNRWA constitutes fanning the flames in Gaza. The problem is that Israel has trouble publicly communicating this view to the US president.