A song by Israeli Yehonatan Geffen about the Palestinian girl who slapped two Israeli soldiers ignited an all-out war between right and left. 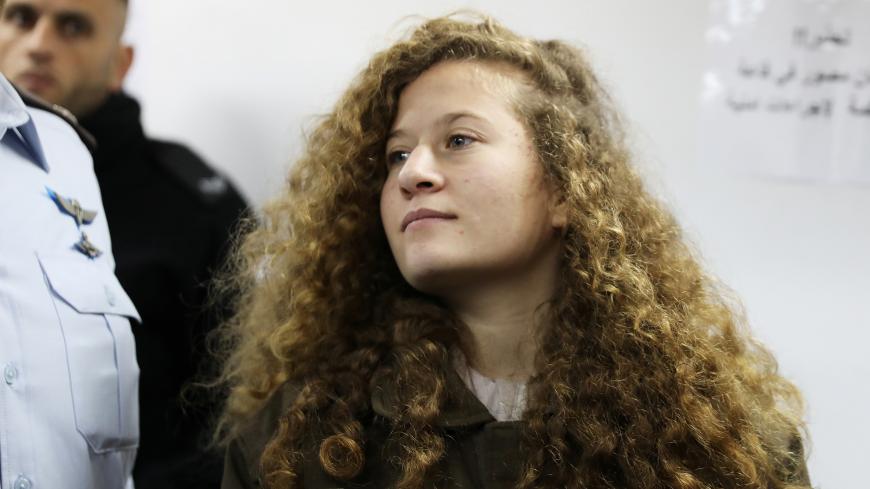 On Jan. 22, one of Israel’s top songwriters, Yehonatan Geffen, posted a tribute on his Instagram account to Ahed Tamimi, the Palestinian teenager who achieved global fame by slapping two Israeli soldiers in the West Bank, comparing her to Anne Frank. In a healthy society, the post would have generated a spirited debate over whether comparing a Palestinian activist to a Holocaust hero was worthy or an ill-conceived provocation.

Instead, the reactions reflected a state in disarray. Defense Minister Avigdor Liberman professed himself shocked by Geffen’s poem and ordered the popular Israel Army Radio station to blacklist his songs. Attorney General Avichai Mandelblit said the order was illegal, but Liberman was not deterred. This set off a chain of events and racist invective by artists and politicians that pitted leftists against supporters of the right and immigrants from Russia against veteran Israelis. Like a cluster bomb explosion, the resulting damage wreaked havoc.

Geffen’s post did not generate any particular interest initially. Liberman was the one who turned it into a very big deal. Geffen is a prolific poet, songwriter, pundit and playwright. His uncle was late Defense Minister Moshe Dayan, and he served as a paratrooper. As a left-wing activist opposed to Israel’s occupation of Palestinian lands, Geffen occasionally vents his views in texts many Israelis find jarring. This is what he wrote about Tamimi:

“A pretty 17-year-old girl committed a terrible deed/and when a proud Israeli officer/invaded her house once again/she gave him a slap … you, Ahed Tamimi/the redhead/like David who slapped Goliath/will be among the ranks of/Joan of Arc, Hannah Szenes [a Jewish paratrooper executed by the Nazis] and Anne Frank.”

Liberman, who in recent months has abandoned any pretense of the sober, responsible persona he adopted at the start of his term, brought out the big guns against Geffen’s artistry. Along with banning his songs from the airwaves, he tweeted, “The State of Israel will not provide a platform for someone comparing a girl who perished in the Holocaust and a courageous fighter against the Nazi regime with upstart Ahed Tamimi who assaulted a soldier.” On Facebook he went further and dubbed Geffen “a drunk.”

Liberman could have expressed reservations about Geffen’s lines and moved on, or he could have ignored them. Israel’s might would not have been dented in the slightest. He chose instead to set off a furor and succeeded beyond his expectations. Among the artists who chimed in with their views was beloved veteran singer Gidi Gov, who got into hot water over a racist slur against Liberman that reflected the danger of Israel’s tribal wars.

A clearly upset Gov, who, like Geffen, is identified with Israel’s Ashkenazi (of European origin) cultural establishment, sought to back Geffen and disparage Liberman. Instead, he came out sounding like a racist when he said on his radio program, “It’s hard for me to hear — and I apologize for the ignorance, vulgarity and racism — someone with a Russian accent, who is basically a new immigrant, calling Yehonatan Geffen an enemy of Israel.” Liberman was born in Moldova and moved to Israel some 40 years ago.

Gov’s unfortunate comment turned out to be explosive. He was accused of racism, and Liberman’s Yisrael Beitenu party, with its immigrant political base, asked the attorney general to investigate the singer on suspicion of incitement and racism. It also demanded that Gov be fired from the radio station. Gov apologized, but did not retract his criticism of Liberman. Geffen’s son Aviv, a popular singer, joined the fray and posted a derisive reaction on Facebook. “As long as you’re the defense minister, Haniyeh and my father’s songs can sleep peacefully,” he wrote (in a reference to Liberman’s 2016 bluster against Hamas political bureau chief Ismail Haniyeh).

Unbelievably, the defense minister of the State of Israel did not hold back and answered Aviv Geffen. “I don’t fight songs. I fight lies,” he wrote. Adding insult to injury, musician Dudu Elharar, who identifies with the political right, chimed in with a particularly revolting incendiary text against the left: “I would be happy to sit on the roof of [extermination camp] Treblinka and see [writer] Amos Oz going up in smoke through the chimney.”

The fracas would not have been complete, of course, without the 2 cents' worth “contribution” of Culture Minister Miri Regev, whose office canceled Geffen’s appearance at this year’s annual Independence Day torch-lighting ceremony.

This is not the first time that comments by a well-known personality upset Israel’s ethnic, political and religious sensitivities. Among the more memorable are those by the late entertainer Dudu Topaz, who dubbed members of the Likud Party as “riffraff” during the 1981 election campaign, and actress Tiki Dayan, who labeled Likud members “a mob” in the 1999 election campaign, and artist Yair Garbuz, who spoke out in the 2005 election cycle against “amulet kissers and pagan worshippers.” Whether slips of the tongue or offhanded remarks, these turned out to be so explosive that they sometimes swayed the election results.

This week’s events were an uncontrollable chain of action and reaction. It started out with a legitimate post by Geffen, an artist and left-wing sympathizer who chose to express his views of the occupation. It went on with a series of responses and harsh language — at first by Liberman, followed by Likud ministers like Regev and Ayoub Kara, who could not afford to sit out yet another populist battle between left and right. Not one of them thought about the significance of the wild attacks on Geffen, who had simply used his keyboard to generate debate. He did not incite against anyone, and he did not break the law. In his inimitable way, he held up a mirror to Israeli society and the country’s soldiers who are deployed in the impossible tasks of occupation. Geffen apparently wanted to shock, and he could have done so perhaps without the comparison to Anne Frank. However, it was the top political leadership that turned the affair into dynamite rather than discourse. Not one of the senior ministers considered the implications of inflaming such base instincts, which in 2015 had already resulted in a physical attack on Geffen at his home over his “leftism.”

As is usual in such cases, Prime Minister Benjamin Netanyahu, the responsible adult who should have been dousing the flames, was glaringly absent. But what can one expect from someone who played a key role in fostering the polarization and hatred between right and left, and who was busy this week rubbing shoulders in the elegant salons of Davos at the World Economic Forum and filling his lungs with clean Swiss mountain air.