Principlists consolidate state control over Islamic Azad University in the aftermath of the recent protests in Iran. 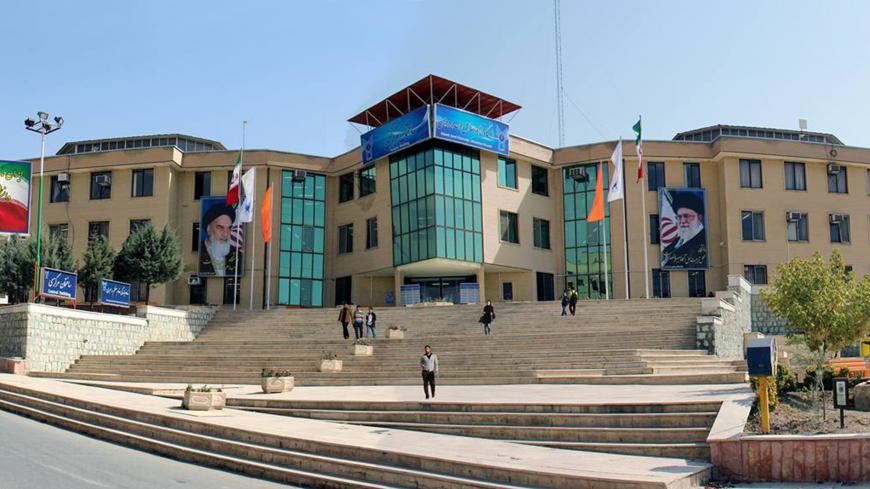 The Islamic Azad University, which has approved new rules that are set to increase state control over its many campuses, Roudehen, Iran. Posted June 2, 2017. - Facebook/Gulám Mahmad Balóc

On Jan. 14, Islamic Azad University (IAU) approved new rules that are set to increase state control over its many campuses. The move will also consolidate the Principlists’ grip over Iran’s largest private university.

As part of the new regulations, the Friday prayer leaders of Iran’s 31 provincial capitals were placed on the university’s regional boards of trustees. These clerics are appointed directly by Supreme Leader Ayatollah Ali Khamenei. In a different announcement on the same day, IAU management declared that music concerts were outlawed on all of its campuses.

The restriction on cultural activities while increasing the clerical influence over the organization comes only weeks after a wave of protests over a range of economic and political grievances hit many Iranian towns and cities.

Given that the protests primarily attracted young people from lower-income backgrounds, IAU students are likely to have participated in them. Officials have stated that 90% of those detained were under 25. While state universities are concentrated in major cities, IAU — which enrolls over a million students — has branches near or in every single of the 75 towns in which protests were recorded between Dec. 28 and Jan. 3.

Students at IAU have over the past several years accumulated a range of pent-up demands, including restrictive campus environments and the high cost of education. IAU claims that its tuition fees tend to increase by less than the going inflation rate, and that these increases are necessary to keep many loss-making campuses operative.

Yet for many students and their families, increases in tuition fees are a heavy burden. Tuition fees are applied evenly across campuses, irrespective of location, and vary by course and subject. Tuition fees for bachelor's degrees range from $200 to 250 per term. Meanwhile, costing around $300 in 2013, fees for master's degrees have nearly doubled in the past four years. In the current academic year, students pay between $500 and $600 per term. To put this in perspective, the country’s monthly minimum wage stands at $200. In 2015, average monthly expenditures of a rural family totaled $350.

Costs are not the only issue, however. The quality of education also tends to be low, and students face bleak prospects when entering the labor market. In spring 2017, quarterly youth unemployment hit its highest level in 16 years, reaching 28.8%. Even more worryingly, college graduates tend to suffer from higher unemployment rates than high school graduates.

When tuition fees for incoming medical students increased by 10% last summer — a figure in line with annual inflation — young readers flooded the Iranian Students News Agency with complaints. One student, Mahdi, said, “It’s true that the average income of doctors and dentists is relatively high, but IAU should not be allowed to dramatically increase tuition fees and pile pressure on the students’ working families.” Another student, Maryam, claimed that “the increase in costs is completely out of my family’s reach.”

IAU strictly limits the possibility for students to organize locally and express these grievances publicly. Students can face tough disciplinary action if they are caught participating in protests. Indeed, Basij groups at several IAU campuses sent out statements or organized marches condemning the recent protests.

Such threats have not prevented some students from taking collective action. In late 2016 and early 2017, for example, IAU students in both Esfahan and Tehran demonstrated against high tuition fees, the low quality of on-campus food and low educational standards.

Many families feel the high cost of education, some of whom in turn pressure their employers for higher or delayed pay. Many labor protests take place before the start of a new academic term. During a summer 2016 protest in northern Iran, factory workers demanded that their employers "transfer at least a part of our delayed wages so that we can pay for the heavy costs of education of our children.”

Amid extensive student grievances over precarity and costs, IAU has taken a sharp political turn over the past 12 months, further exacerbating tensions with parts of its student body. One year after the death of its founder, former President Akbar Hashemi Rafsanjani, Principlists have managed to consolidate control over much of the IAU enterprise, from its top management to media to its regional branches.

Under the leadership of Rafsanjani, IAU had tended to steer a complex path between both Reformist and Principlist forces. However, when Rafsanjani died in January last year, Principlists moved swiftly to take over the IAU enterprise. By April, senior management under the leadership of Ali Akbar Velayati, a close confidant to Ayatollah Khamenei, was able to oust the university’s moderate president. In May, the university replaced the editorial managers of its extensive media arm, including of the Farheekhtegan newspaper, the online Iscanews and the major Azad News Agency. Finally, on July 22, staunch conservative Farhad Rahbar was approved as the institution’s president. The administration of moderate President Hassan Rouhani, despite being re-elected in the summer of 2017, has been unable or unwilling to push back against Principlist advances within IAU.

The takeover, which has mainly taken place at the higher executive level, has also led to tensions with students. For example, on Dec. 6, students were filmed dancing to celebrate National Student Day on the IAU Najafabad campus, inciting sharp criticism from Velayati, who called it “pure vulgarity.”

It remains to be seen how the Principlists will respond to the overlapping economic pressures and social restrictions facing students. So far, other parts of the Iranian elite have responded to the protests with economic concessions. For example, parliament has publicized parts of next year’s budget that promise wage increases of 18% for low-earning state teachers. Having taken over IAU, the Principlists now face the difficult question of how they hope to use the institution to their advantage in the next round of elections. The Principlists' success in doing so will hinge on IAU’s ability to resolve existing student grievances. At the same time, other factions in the elite may benefit if the Principlists fail.