An exhibition in Istanbul by the Turkish artist CANAN defies gender stereotypes and sexual taboos, marrying the personal with the political. 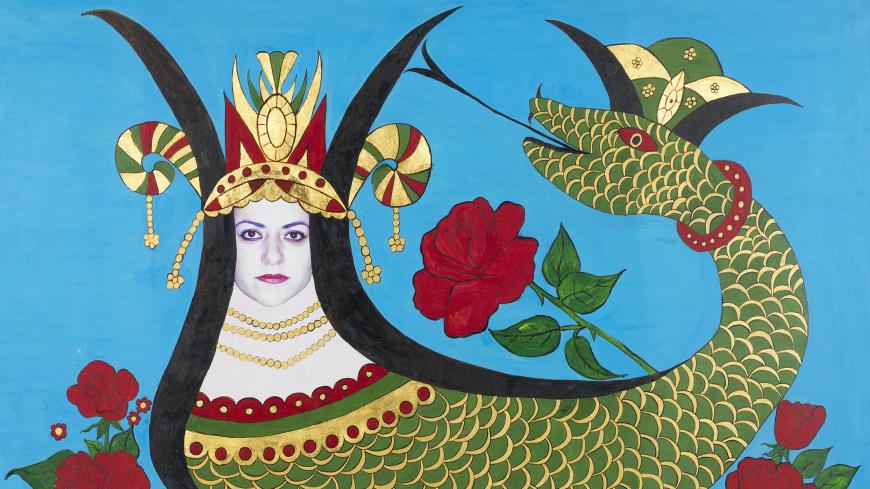 "Shahmeran," one of CANAN's works displayed at the Arter Gallery in Istanbul, demonstrates the artist's ability to combine myths with reality and political with personal. Istanbul, Turkey, Aug. 15, 2017. - Arter Gallery

“Behind Mount Qaf,” the sprawling exhibition — which runs through Feb. 18 — of two decades of CANAN’s paintings, photographs, videos, sculptures and more, takes its name from the cosmic mountain of Persian and Arab legend, luring viewers into the familiar realm of allegory before the artist surreptitiously merges the personal, including the use of her own body, with the political.

“Mount Qaf is both familiar and otherworldly, but in fact it is a world we all possess: the world inside of us. Myths, fables and dreams are as personal as they are collective — part of our common subconscious,” CANAN told Al-Monitor in an interview at the show. “Everything in our individual or shared subconscious is — ultimately — political.”

It is a bold undertaking at a time of tumult in Turkey, when many artists feel they must tread carefully between the provocative and the socially acceptable. Tens of thousands of people, including writers, journalists and politicians, are in prison under a state of emergency that followed a failed coup attempt last year, and the forces of censorship are palpable.

Rising social conservatism has not overlooked the art world. Islamist protesters who stormed an exhibit in October tried to smash a statue by Australian artist Ron Mueck, outraged that the nude figure was exhibited in a home once owned by an Ottoman caliph.

Turkey’s leading feminist artist CANAN has used her own, nude image in her work for two decades yet still felt trepidation when putting together this show. “My body is indispensable to my work, it is a source of my artistic material,” she said. “But I have experienced no trouble. I saw that my anxiety was unfounded.”

In “Cybele,” a heavily pregnant CANAN portrays the Phrygian goddess before she gives birth. The photograph, from 2000 but shown here for the first time, was in response to a debate that continues to recur over whether pregnant women should be seen outside the home.

“Like all women, the ideal body has been imposed on me, but it is a serious form of dictatorship. When we begin to challenge that image, when we pursue what we want, when we listen to our desires, we are able to free ourselves of our internal dictator as well as an external, collective dictatorship,” she said.

Yet the pressures of the real world lurk nearby. At the entrance, just off the bustling high street of Istiklal, a security guard points visitors to a sign that reads, “This exhibit contains sexual and frightening content, which may be disturbing for children.”

Feminism has “consistently and uncompromisingly” been at the heart of CANAN’s work, said Nazli Gurlek, the show’s curator.

“Despite the obvious difficulty women face in Turkey, there is also heightened awareness here, and that makes it possible for the artist, if she believes in what she has to say, to find a way,” Gurlek said. “CANAN has never self-censored or retracted. She follows the path she believes in.”

Even her name, CANAN, is an act of protest. Married while still a university student, she took the last name of her husband as per Turkish civil law and signed most of her works in the 1990s and 2000s as Canan Senol. But when she decided to get a divorce in 2010, she learned that she needed the permission of both her husband and the government to continue using the last name. She then decided to drop the last name and opt for a capitalized first name. “I refuse to use this surname that depends on the permission of the husband and the government. I am bored and fed up with facing permissions and impositions in every stage and field of my life,” she writes on her website.

The artist found a “kindred spirit, flouting the watchful eyes around her” in the real-life Martha Arat. “Women Bathing at Midnight” (2017) is dedicated to Arat, who lived on one of Istanbul’s Princes’ Islands in the 1980s. An Armenian Catholic from Lebanon, the former ballerina became notorious for her transparent clothing and skinny-dipping in the Sea of Marmara. When the islanders’ gossip became too vicious to bear, she committed suicide. Today, the cove where she once swam bears her name, Madam Martha Cove.

In CANAN’s film, women dressed in white and crowned with flowers howl at the moon before descending a hill in peals of laughter to shed their clothing and enter the moonlit sea. Evoking a pagan ritual, the act is defiant in a country where government ministers have told women to avoid laughing in public.

Other works are nods to more traditional forms, such as embroidered Ottoman miniatures and the inky 15th century Siyah Qalam drawings preserved at Topkapi Palace in Istanbul. The three floors of CANAN's exhibit, dubbed Heaven, Purgatory and Hell, reconfigure the ascent of the mythical Mount Qaf, the Sufi summit said to stand at the end of the world. The motif appears in literature, from Dante’s climb of Mount Purgatory to Salman Rushdie’s peak-scaling protagonist in “Grimus.”

“In Islamic cosmology, Mount Qaf is the unattainable mountain, but the notion of reaching a summit to find yourself is found in other mythologies,” CANAN said, stressing that her theme is irreligious. “The concepts here are with us whether we are religious or non-believers. Arriving at Mount Qaf is the story of self-discovery.”

“We have lived through a deeply traumatic period and everyone is looking for a way to heal,” CANAN said. “It is unacceptable that people have been imprisoned and that expression has been confined. I do not see a difference, whether we are creating prisons for ourselves or people are literally shut in a cell.”

She continued, “Reaching Mount Qaf is to realize how the mechanisms of power bind us — and then to discard them.”