Thousands of Lebanese expatriates registered to vote in next year's parliamentary elections through a new online platform, giving them the chance to shape the first legislature elected by a system of proportional representation. 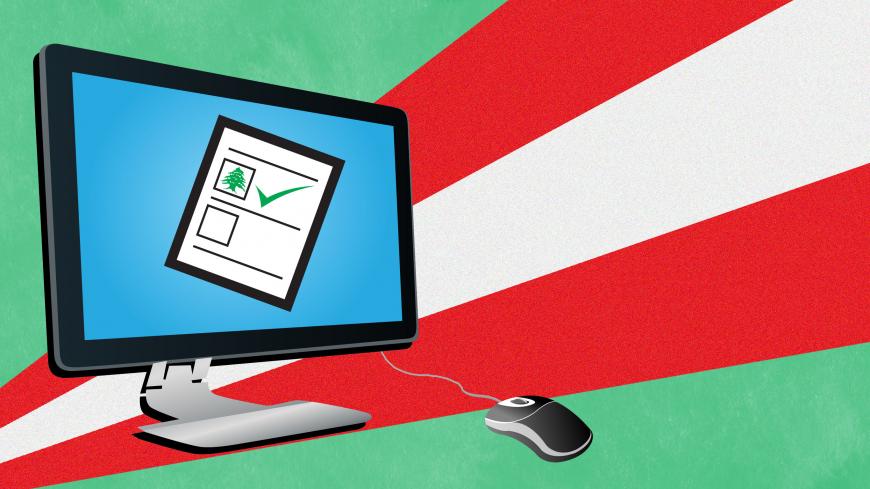 Lebanon has made it easier for eligible expatriate voters to register for May parliamentary elections. Image by Hugo Goodridge/Al-Monitor. -

With long-awaited parliamentary elections scheduled for May 2018, the Lebanese government provided an online platform Nov. 3-20 so non-resident Lebanese could register to vote. More than 90,000 eligible voters took advantage of the opportunity, the first time such an option had been offered.

Elections law No. 25, adopted in 2008, stipulated that out-of-country voting begin with the 2013 parliamentary elections — previously, Lebanese expatriates returned home if they wanted to vote — but balloting has been postponed three times, to 2014, 2017 and currently 2018. Lebanese abroad would have been able to register at embassies and consulates ahead of the 2013 elections.

“The only change is that this registration process could be done online, which is very good, because it increased the number of voters able to register,” Zeina Helou, general-secretary of the Beirut-based Lebanese Association for Democratic Elections, told Al-Monitor. “In 2013, a study by the Ministry of Foreign Affairs assessed that around 900,000 non-resident Lebanese were eligible voters, but only 10% — 92,810 people — were registered.”

Helou also explained that several thousand people had been unable to complete the process on time. “The government is currently discussing extending the [registration] deadline, notably due to the difficulty of getting the necessary papers for around 8,000 people, but nothing has been confirmed yet,” Helou said. “I think that people abroad might not be that enthusiastic about this election, because it was postponed, and they are afraid it will be [postponed] again. Also, some of them never come to Lebanon.”

Among those who did register are young Lebanese who have never voted for parliamentary representation, as they were too young or already living abroad at the time of the last elections. Al-Monitor contacted a few of them via Facebook and email.

“I was only 17 when the last elections took place, in 2009, and the voting age in Lebanon is 21,” Kareem Chehayeb, a journalist and political analyst currently studying in London told Al-Monitor. “I could have voted when elections originally were scheduled to take place, in May 2013, but it was the first of several [legislative] term [extensions] until, hopefully, this summer.”

Sandra Geahchan, also studying in London, decided to register so her voice could be heard. She said, “Political dynamics have shifted, governments have fallen and have been formed in the last eight years, and no one has ever asked my opinion.”

For some people, being able to vote in Lebanon, even if not spending most of their lives there, is their way of exercising their democratic rights. This holds for a French Lebanese woman who lives in Paris and requested anonymity.

“It cuts a bit of the distance between you and your family when you are far away and gives [you] the feeling that [you] count a bit,” she told Al-Monitor. “I think it can really change things if Lebanese abroad get involved, notably if there is strong or weak involvement by Lebanese politicians in the country they live in. But I don’t think we can really be sure of the impact [voting] will have, as many people like my parents are still stuck in a war logic that will prevent them from voting for alternative or progressive lists. I also saw that many students didn’t register, because they are still not sure of where they will be at that time.”

Hind Hamdan, a student in London, told Al-Monitor, “The influence and relationships between the diaspora toward their country might play in the balance. More important, Lebanese abroad can better overcome sectarian political links and affiliations.”

In addition to online registration, another first for the upcoming elections is the introduction of a proportional representation system. It was adopted in an electoral law passed in June that will also alter the number of districts.

Assessing the new system's possible impact, Helou noted, “The fact that the proportional [system] is involved might really push people to vote, because it will have more value.” The previous system law was based on a 1960 law that allotted a certain number of parliamentary seats to different religious sects in each district.

Helou also thinks that being able to vote from abroad will advance the democratic process, as more people will be involved. “We have also seen in the past that many expatriates were pressured and paid to go to Lebanon for the elections by [political] parties, so [the new system] will give them more freedom,” she added. “But we need to monitor now how many voting stations will be set up, as a station requires at least 200 registered voters to be opened.” Expatriates will be need to go to an embassy or consulate to vote.

Despite the effort made to allow Lebanese expatriates to register, skepticism about their possible impact remains for those voting for the first time.

“A real discussion about the role the diaspora should play in Lebanese politics should be and should have been held when initiating the diaspora vote,” Geahchan said. “Although it is natural that any Lebanese citizen should be given the right to vote for local elections, I am wary of any narrative that points at the diaspora to bring about any real change. The problem with Lebanese politics isn’t the nature of the voters, it is the choice in political programs and candidates that is being given to voters that significantly restricts possibilities for change.”

For Chehayeb, the impact of the Lebanese diaspora should not be underestimated. “Political parties have a huge presence abroad within the Lebanese diaspora, from North America and Europe to Africa and Australia,” he said. “I think the reason we are seeing this [new approach] emerge is because there are many members of the Lebanese diaspora with business interests at a time when Lebanon is looking for more foreign direct investment that is not immediately correlated to political support.” An improved political environment might help persuade those with capital to consider investing it in Lebanon.

“This [voter registration] is a step forward in bridging the gap between the government and the diaspora, but I don’t expect any dramatic shifts, to be completely honest. With the 2015 garbage crisis protests, and then the emergence of at least two independent groups in the Beirut municipal elections the following years, we can safely expect something similar to happen. I don’t see a radical shift in Lebanese politics. If we use the new electoral law as a foundation, then one can expect some changes, but nothing dramatic.”

For young Lebanese abroad, exercising their right to vote seems to be more important than the results. If elections are indeed held in May, it would be a first step for many toward being heard and acknowledged. More may join in the experience if Foreign Minister Gebran Bassil is successful in his call to extend registration, issued two days after the Nov. 20 deadline.