Those praising Israeli democracy must remember that women are constantly discriminated against by ultra-Orthodox parties that are part of the ruling coalition. 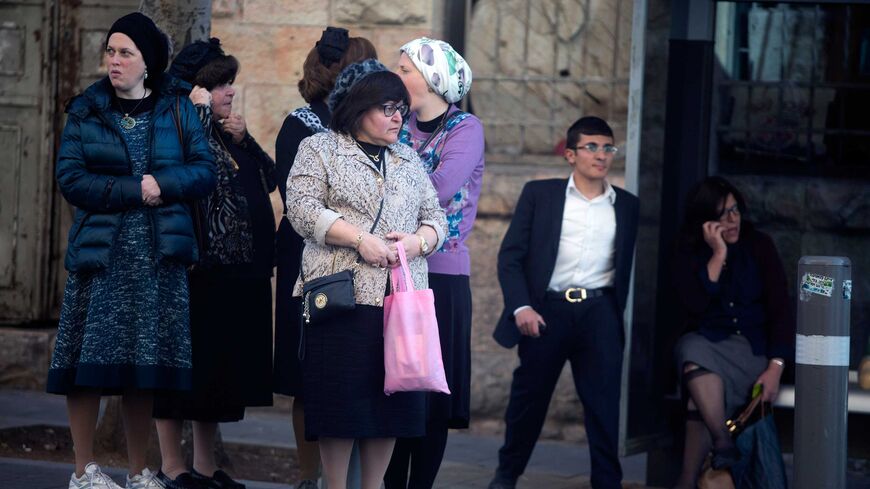 On Dec. 18, US Ambassador to the UN Nikki Haley took the opportunity of a periodic Security Council debate on the situation in the Middle East, which generally focuses on the injustice of the Israeli occupation of Palestinian territory, to attack the organization for being what she termed “a disproportionately hostile place for the Middle East’s most enduring democracy.” Luckily for the top American diplomat, she was not born in an ultra-Orthodox family in Jerusalem, the city whose name she has been citing repeatedly in recent days. Ultra-Orthodox women from Jerusalem do not get to be governors or members of Congress and can only dream of an ambassadorial appointment.

The ruling coalition of “the most enduring democracy” in the Middle East includes two ultra-Orthodox political parties that have never been represented by a woman. They have never had a single female representative in Israel’s local governments either, nor have they ever had a female representative in the Israeli foreign service. On the other hand, the Republic of Iran, notorious for its religious fanaticism, has 17 women members of parliament. Afghanistan, Tunisia, Sudan and South Sudan leave “the only democracy in the Middle East” behind in terms of women’s parliamentary participation.

Israel is among the few states in the Middle East, and the only one in the West, that has for decades practiced gender-based discrimination — in addition to discrimination on grounds of nationality, ethnicity and religion, with which this column has dealt extensively in the past.

Article 6 in the bylaws of the ultra-Orthodox Agudat Yisrael Party — one of two parties that make up the Yahadut HaTorah faction in the Knesset — stipulates that a party member must be an adult male over the age of 18 who observes religious law, fears God and identifies with the party and its goals. Note that this must be a man, not a woman. Rabbi Mordechai Blau, No. 48 on the party’s potential Knesset list and head of the party’s “guardians of sanctity and modesty,” threatened in 2014 that ultra-Orthodox feminists agitating for political power would be ostracized and boycotted, their marriages annulled and their children banned from party-run schools. The Shas Party, which represents ultra-Orthodox Jews of Sephardi (Eastern) origin, also forbids women from running for public office but is careful not to anchor this offensive edict in any official document.

The State of Israel is complicit in the fact that in its almost 70-year history, only one ultra-Orthodox woman has served in the Knesset — Tzvia Greenfeld, a member of the liberal Meretz Party. The top echelons of public service elected for local and national governing bodies will continue to exclude some 400,000 ultra-Orthodox women who constitute 4.5% of the population.

On Dec. 20, the Supreme Court held a hearing on a petition filed by ultra-Orthodox women against the state’s registrar of political parties and Agudat Yisrael. In an opinion submitted to the court ahead of the hearing, Attorney General Avichai Mandelblit warned against state intervention and invalidation of the party’s bylaws on women. He noted that banning discrimination of women was a deeply rooted principle in Israeli society, and he even agreed that sweeping disqualification of people based on their affiliation or gender was a serious act, especially when directed against a minority within a minority.

Mandelblit conceded that he had not been presented with any explanation of why women should be precluded from party membership. And after all was said and done, the government’s top legal representative asked the court to reject the petition. The reason: “The special nature of the political party arena that requires optimum flexibility in accepting ideas and worldviews, even those that are not in tune with the basic principles of the system, and that challenge the perceptions of the general public.”

Although the position of Mandelblit, himself a religious man, is unacceptable, it is understandable. Enforcement of the principle of gender equality on the country’s ultra-Orthodox parties would generate a political crisis that could result in the government’s downfall. But how can a woman representing a major democratic power such as the United States praise a democratic regime that discriminates against women? What happened to female solidarity? How does a woman ambassador to the UN ignore a flagrant violation of the UN Convention on the Elimination of All Forms of Discrimination against Women?

The convention, which Israel ratified in 1991, requires signatories to take all appropriate steps to abolish discrimination against women in political and public life. It specifically says women must be granted conditions equal to those of men as far as the right to vote in all elections and referendums and be eligible for election to all elected bodies. It also specifically spells out that signatories are committed to ensuring women’s participation “in the formulation of government policy and the implementation thereof” and their right “to hold public office and perform all public functions at all levels of government.”

Estee Rieder Indursky and Esty Shushan are co-directors of an ultra-Orthodox feminist group Nivcharot (Chosen Women) that advocates for increased political representation of ultra-Orthodox women. In an opinion column last year in Haaretz, they wrote that their “suffragette mothers” at the beginning of the 20th century fought for the right to formulate laws and participate in decision-making. In the 21st century, they added, these rights are being withheld from ultra-Orthodox women such as themselves. Ultra-Orthodox male politicians justify the exclusion of women from the public sector with the two-faced ancient Jewish saying, “The princess' honor is best displayed in private.” (Tehilim 45:14) Mandelblit seeks to perpetuate this dubious “honor” by arguing that the legislator and courts have recognized “that there are situations in which cultural singularity can justify behavior that normally would be discriminatory or an injury to liberty.”

Would Mandelblit also defend the right of a political party dedicated to salvaging the country’s democracy to run for the Knesset with a bylaw that excludes ultra-Orthodox men? Is defense of the principle of equality in Israel not a fitting “cultural singularity”? And what would Mandelblit say if, one day, the Knesset adopts a law citing “cultural singularity” as justifying exclusionary Jews-only cities and neighborhoods? Wait a minute: Such a legislative proposal is currently under Knesset debate in the Middle East’s “most enduring democracy.” Someone should tell Mrs. Haley.