No end in sight for Israel's political divide in 2018

Israeli Prime Minister Benjamin Netanyahu's survival strategy has always been to drive a wedge between the right and the left, and we can expect more of the same in 2018. 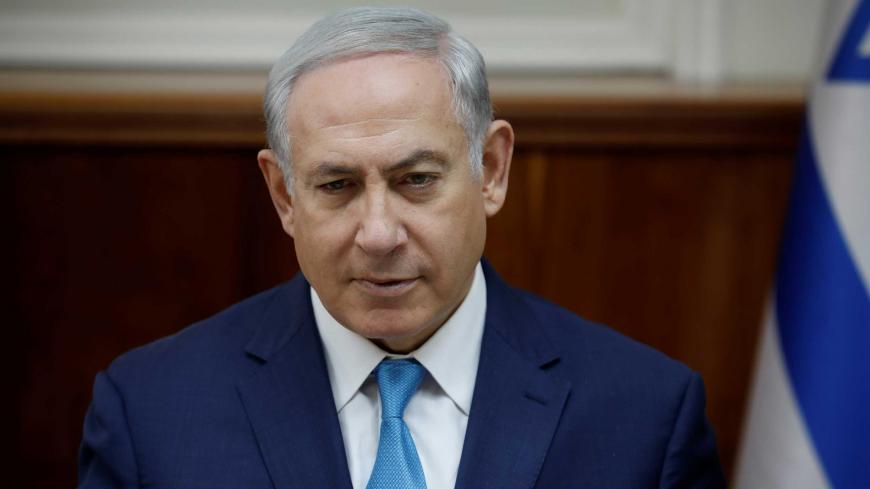 Israeli Prime Minister Benjamin Netanyahu's preferred strategy of driving a wedge between the right and the left has served him faithfully, ever since he first burst onto the political scene more than 20 years ago. There were only a few rare instances in which he exhibited a more inclusive official stance and appealed to the political center. This happened when he served as minister of finance in 2003 and when he had a coalition with the Labor Party in 2009. Other than that, Netanyahu always seems to prefer a return to the "crime scene," particularly in times of crisis.

The police are expected to release soon their recommendation to indict Netanyahu, apparently for bribery. Before that, Netanyahu has been tightening his relationship with the right, or what he calls, his "base." He did it when he addressed the Likud on the last night of Hanukkah on Dec. 19, and he did it again Dec. 26, when he invited the rabbinic leadership of the religious Zionist movement to his office and complained to them that the left is taking steps to bring down his right-wing government. To ensure that the right-wing rabbis really understood the significance of what he was saying, Netanyahu warned them of how the fall of his government would impact Israel’s position on the diplomatic process.

His insinuation was obvious. Even right-wing demonstrators against corruption are a tool in the hands of the left (allegedly in order to topple Netanyahu and weaken the right-wing camp). Putting his survival in practical terms, Netanyahu wanted to ensure that the anti-corruption movement on the right would not gain the upper hand. In doing this, he cast democratic activity on the right as illegitimate.

While everyone is well-aware of how Netanyahu's preferred approach to crises is to drive a deep wedge between the right and the left, the far-reaching impact that this has on Israeli society does not gain the attention it deserves. What is especially disconcerting about the phenomenon is that Netanyahu is not the only one guilty of this. Even his rivals in the opposing camp align themselves with his efforts to delegitimize the left, i.e., themselves.

As the titular head of the left, Labor Party Chairman Avi Gabbay tried to appeal to the right by reiterating Netanyahu's incendiary remark from 1997 that the left forgot what it means to be Jewish. But this only gives validity to Netanyahu's original claim and serves the prime minister's divisive policies by casting aspersions on his own camp. The same can be said about Yesh Atid leader Yair Lapid. He regularly avoids any association with the left, as if it was some deadly disease, even though a significant part of his voter base identifies with that camp.

When Gabbay and Lapid play to the right and adopt parts of its agenda, they are helping to make the left-wing worldview seem damaged. In the past, the right used to say that the left tended to believe the Arabs because its supporters were naive. Today, the term "left" has become synonymous with anti-Zionism and treasonous attitudes toward national values. The architect of this radicalized rhetoric is none other than Netanyahu.

On an inner, more clandestine level, the growing rift between left and right in Israel in 2017 has made it utterly impossible to engage in a substantive debate even on matters that are not ideological or political, without viewing them through that prism. It is also worth noting that this is true of both sides of the political divide. That is why right-wing demonstrators against corruption are not considered to be citizens who want what is best for the country. Instead, they are immediately labeled as fifth columnists, serving the interests of the left. Meanwhile, most anti-corruption demonstrators on the left are seen by many in the right-wing camp, who side with Netanyahu, as hoping to launch a coup and topple the right-wing government through investigations into the prime minister's affairs. What they fail to recognize is that these political protests are both legitimate and necessary. Exacerbating the situation even further is the fact that the demonstrations' own organizers deny that they are part of the left and that their objective is political. In fact, they try to underplay this. This makes it seem like they also believe that the left is "problematic" at best and "treasonous" at worst. The irony is that as such, they are also contributing to the de-legitimization of the left.

The inability to hold a healthy debate is not just a feature of the fight against corruption. Almost every meaningful public debate turns into an ugly battle between the left and the right.

A prime example of this phenomenon is the uproar surrounding a law proposed by HaBayit HaYehudi Chairman Naftali Bennett and his party's Minister of Justice Ayelet Shaked to limit the Supreme Court's authority to overturn Knesset legislation. As leaders of the settlers and the religious right, Bennett and Shaked argue that the Supreme Court infringes on the authority of the Knesset as the legislative branch of government with its revoking of new laws. There was an immediate uproar on the left, with Bennett and Shaked accused of working for those elements on the right, who regard the Supreme Court as the enemy of the settlers. They were accused of wanting to undermine the court because its rulings are detrimental to the settlement enterprise in Judea and Samaria.

The fact is that in the past two years alone, the Supreme Court overturned laws that have nothing to do with the settlers. This includes legislation about taxing a third apartment, the status of illegal aliens and a law to block the splitting up of the country's public broadcasting corporation. Discussions surrounding the Supreme Court's authority to overturn these laws is, therefore, appropriate, since it has nothing to do with whether the court leans left or not.

The one person to add a pragmatic aspect to this debate was former Justice Minister Haim Ramon. Although he identifies with the political left, in this particular issue, he stood at the side of the current justice minister by declaring, "Shaked is right." He explained that everywhere in the world, the right of courts to overturn laws passed by the legislature derives from the constitution or an explicit law granting it that power. Only in Israel is this power based on some "far-reaching" interpretation of the country's Basic Laws (Israel has no constitution).

Turning this important debate into part of the struggle between right and left is detrimental to the very essence of the discussion. It is exactly the same as how the incident involving Elor Azaria (the Israel Defense Forces soldier convicted of killing a wounded Palestinian assailant) should have remained a military matter rather than a political firestorm pitting right against left — for which, it should be remembered, Netanyahu was responsible.

As 2018 rolls in next week, we can expect to see a year replete with major political decisions. At the center of all these will be Netanyahu's struggle to survive, which will only fuel the war between the right and the left. It seems unavoidable given the current atmosphere. In other words, we should not expect much good to come out of 2018.