The increase in global oil prices and the depreciation of the Turkish lira are a bruising mix for Turkey, which heavily relies on imports to meet its energy needs. 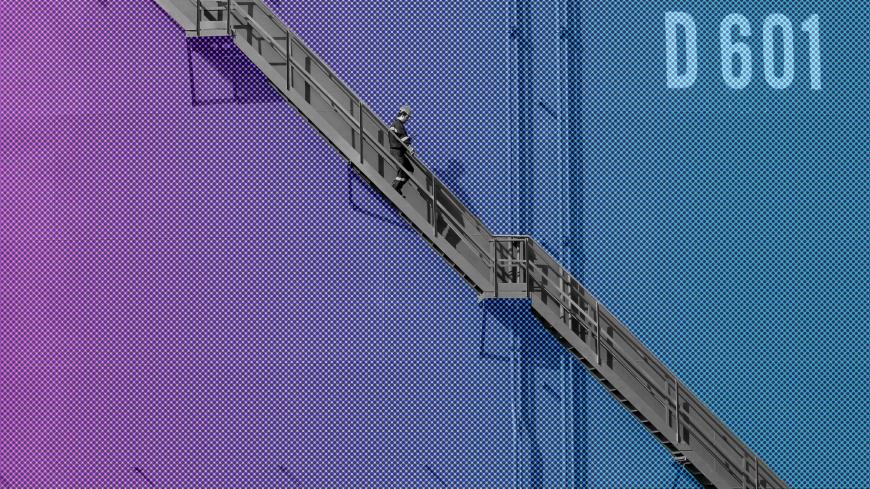 A worker walks down the stairs of an oil tank at the Mediterranean port of Ceyhan, Turkey, Feb. 19, 2014. - REUTERS/Umit Bektas

Atop an inflation rate stuck at 11%, an urban unemployment rate above 13%, a current account deficit close to 5% of gross domestic product (GDP), a growing budget deficit and a rapidly depreciating currency, Turkey is now being hit by an increase in global energy prices coupled with a rise in prices for metals and minerals.

Turkey relies heavily on imports to meet its energy needs. The same goes for a number of raw materials. Turkey's bill for them is now swelling, not only because of the price increases themselves, but also because of the Turkish lira’s deprecation, which makes the dollar more expensive. Crude oil imports, which represent the bulk of the bill, deserve a closer look.

The upward trend in oil and other commodity prices accelerated in the second half of the year under the impact of various political and economic factors. Among the factors driving oil prices are anticipation of expanded US economic growth through tax cuts, increased output by US refineries and corresponding increases in demand, strong demand from China and concerns over oil supplies fueled by the independence referendum in Iraqi Kurdistan. Tensions in Saudi Arabia, stirred by a roundup of royals accused of corruption and a ballistic missile attack on Riyadh, and a drop in the drilling-rig count in the United States have further compounded the trend.

Crude oil prices, as low as $44 per barrel in November 2016, began to rise in the ensuing months, reaching $55 in February. A reversal brought prices down to $46 in June. Since then, however, prices have shot up again, hitting $57 in September, $60 in October and $65 in November. This represents an increase of nearly 48% over 12 months. In addition to the advent of winter, a potentially stronger global growth trend could sustain the pace of the rise.

Other energy items, agricultural raw materials and industrial intermediate goods have seen similar price increases. For Turkey, the burden of higher prices is heavier due to the depreciation of the lira, which has slumped 12% against the dollar in the past two months alone. For the economy, this translates into a source of cost inflation and a tangle of serious problems. The impact on Turkey's oil bill alone is already scary.

Rising oil prices and the tumbling lira are a double blow for the Turkish economy. The country’s oil import bill swelled 36.5% in the first 10 months of the year, rising from $22 billion to $30 billion and accounting for more than half the increase in the foreign trade deficit this year. Besides its macroeconomic impact, the double blow bears directly on consumers, as evidenced by frequent gasoline hikes in recent weeks.

In terms of consumer prices, the year-on-year inflation in the transport sector stood at 16.8% in October, well above the overall inflation rate of 11.9%. For the first 10 months alone, the figures stood at 14% and 9.5%, respectively.

Rising prices for other energy items and metals and minerals stand as additional factors that could sustain the increase in both producer and consumer prices by adding to cost inflation in industrial output. This, in turn, will likely slow economic growth in the last quarter of 2017 and next year, exacerbating the country’s unemployment problem.

In terms of primary energy consumption in Turkey, natural gas accounts for 31% and crude oil for 30%. With the exception of lignite, the country has no significant wealth in terms of fossil fuels, and thus relies on imports to meet three-fourths of its total primary energy consumption. The reliance on foreign supplies is about 98% for natural gas and about 91% for oil, which represents a serious supply security risk.

Turkey’s energy bill fluctuates, of course, depending on global energy prices. Between prices falling in the first few years after the 2009 crisis and rising again by 2014, Turkey’s average energy bill stood at $53 billion per year. When prices dropped in 2015 and 2016, the bill decreased to $37 billion and $26 billion, respectively. In the first nine months of 2017, the bill had already reached $27 billion and is expected to hit at least $35 billion by the year's end.

The increase in crude oil prices is immediately reflected in the price of fuel. The price of gasoline in Istanbul reached 5.6 lira ($1.40) per liter in mid-November and is expected to hit 6 lira fairly soon. For the first time, the cost of filling a tank reached 300 lira ($77.40, based on the exchange rate for Nov. 14). Taxes make up the bulk of the sale price. The government, in its economic program for next year, projects that revenues from a special consumption tax levied on petroleum and gas products will reach 63.3 billion lira in 2017, amounting to 2.1% of GDP.

While the hikes on fuel prices are not deferrable, the government can delay hikes on natural gas and electricity prices. In 2017, for instance, neither has seen an increase. The government’s 2018 program, however, signals change ahead. The relevant paragraph states, “In 2017, no hike has been made on the sale prices of natural gas and electricity due to the relatively low level of oil prices. … In 2018, public economic enterprises in the field of energy are planned to adopt pricing policies that will meet their costs in accordance with the changes in crude oil and exchange rates and thus continue their operations with a sustainable financial structure.” Hikes on gas and electricity are on the way.