Speculation is rife as Palestinian President Mahmoud Abbas returns from his sudden and unplanned visit to Saudi Arabia. 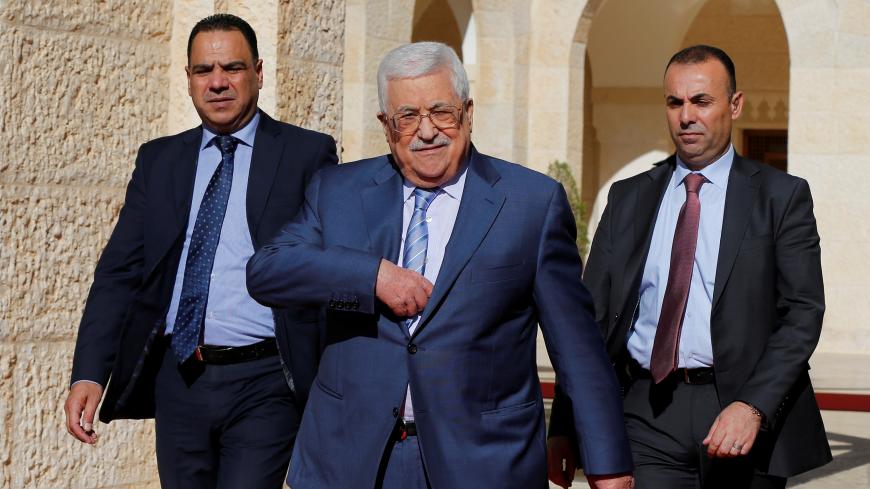 Palestinian President Mahmoud Abbas speaks to the media after his meeting with Jordan's King Abdullah at the Royal Palace in Amman, Jordan, Oct. 22, 2017. - REUTERS/Muhammad Hamed

Saudi Crown Prince Mohammed bin Salman told Palestinian President Mahmoud Abbas that he must either agree to US President Donald Trump’s peace plan or resign, according to reports from earlier this week.

Abbas headed to Riyadh on Nov. 6, amid the sudden domestic developments in Saudi Arabia, including the arrest of 11 princes and ministers implicated in corruption cases Nov. 5.

The official Palestinian news agency Wafa said Nov. 7 that Abbas met with Saudi King Salman bin Abdul-Aziz Al Saud to fill him in on the developments of the Palestinian cause, Washington’s efforts for the peace process and the reconciliation situation.

Abdullah Abdullah, a member of Fatah’s revolutionary council and head of the political committee at the Palestinian Legislative Council, told Al-Monitor, “King Salman and President Abbas are old friends, since 1968, and they speak the same language. The Palestinian cause was the main motive behind the visit, to brief Riyadh on what has been achieved on the national unity and the reconciliation levels, and to inform the king of the attempts to create an Arab front to evaluate any new ideas that are aligned with ending the Israeli occupation and gaining Palestinians’ legitimate rights.”

However, a Palestinian official told Donia al-Watan on condition of anonymity Nov. 11 that the Saudi visit seems to have troubled Abbas, who feels that some Arab parties are trying to unseat him or push him to resign. The official condemned the summoning of Abbas and called it questionable.

The Israeli i24News said Nov. 8 that Abbas might resign under Saudi pressure to accept Trump’s plan for the peace process with Israel and normalization of Arab-Israeli ties in exchange for firm support from the Arab states, mainly Saudi Arabia and the United Arab Emirates, for the Palestinian Authority.

Matthew Levitt, US researcher and director of the Stein Program on Counterterrorism and Intelligence at the Washington Institute for Near East Policy, tweeted Nov. 8, “In Riyadh, Abbas urged to take a hard line on Iran and Hamas weapons.”

In turn, Ahmed Azm, an instructor of international studies and political science at Birzeit University, told Al-Monitor, “The members of the delegation that visited Riyadh urgently could indicate the underlying meaning of this visit, which coincided with the PA announcing Nov. 8 that it would intensify work on the crossings between the Palestinian territories and Jordan around the clock. During the most recent meeting between Palestinian Prime Minister Rami Hamdallah and Israeli Minister of Finance Moshe Kahlon on Oct. 29, the two discussed Gaza’s crossings and the movement of Palestinians between the West Bank and the Gaza Strip crossings. Abbas’ visit to Riyadh might have been about reopening the border crossings between the Gaza Strip, the West Bank and Israel to improve Palestinians’ living conditions.”

In an article published Nov. 7 by Haaretz, Jack Khoury reported that Abbas, on his visit, was expected to discuss "economic assistance to the Palestinian Authority and rehabilitation of the Gaza Strip post-Palestinian reconciliation," adding, "The Saudis are also likely to raise the issue of Iran's involvement with Palestinians, particularly in light of senior Hamas officials' recent trip to Iran and after Hezbollah chief Hassan Nasrallah cited a united front between Iran, Hamas and Hezbollah."

Palestinian political analyst Saleh al-Naami told Al-Monitor, “There are indications that Abbas’ sudden and unplanned visit to Riyadh, upon the kingdom’s urgent invitation, is linked to arrangements that US advisers Jared Kushner and Jason Greenblatt agreed on with Saudi Crown Prince Mohammed bin Salman during their visit to Riyadh at the end of October. These arrangements serve the US, Israeli and Saudi interests. Saudi Arabia might ask Abbas to call for the disarmament of Hamas and to convince Gazans that they have a lot to lose if Hamas keeps its military power. Saudi Arabia could offer to contribute to the reconstruction of the Gaza Strip and to take steps to improve the living circumstances there.”

Presidential Adviser for Diplomatic Affairs Majdi al-Khaldi said in an interview with Arabi21 on Nov. 7 that Abbas’ visit reflects Saudi interest in the developments of the Palestinian cause and national reconciliation. He added, “We have discussed the calls between the US and the other parties involved in the political process.”

But Imad Mohsen, spokesman for the Democratic Reformist Current led by Dahlan, told Al-Monitor, “We are not in the loop on Saudi’s arrangements for such a meeting, despite the kingdom’s interest in Fatah’s internal reconciliation and its reconciliation with Hamas. But it seems Abbas wants to leave political life without uniting Fatah.”

Ibrahim Habib, dean of scientific research at the Ribat University College affiliated with Gaza's Interior Ministry, told Al-Monitor, “Abbas is under Arab and international pressure to settle the Palestinian cause. But he is smart, stubborn and elusive. He will not raise the white flag, even if he fails to face Saudi pressure. He might even mix cards to confuse all parties without giving Israel a chance to impose its political solution. He would rather weaken Israel’s position globally without resigning to prevent any party from taking steps to strip him of his legitimacy.”

Despite remarkable Palestinian interest in the goals behind Abbas’ visit to Riyadh, silence prevails, perhaps due to the delicacy of the deliberations.