The story of an Iranian wrestler who was pressured to lose against a Russian opponent to avoid facing an Israeli wrestler has caused controversy in Iran. 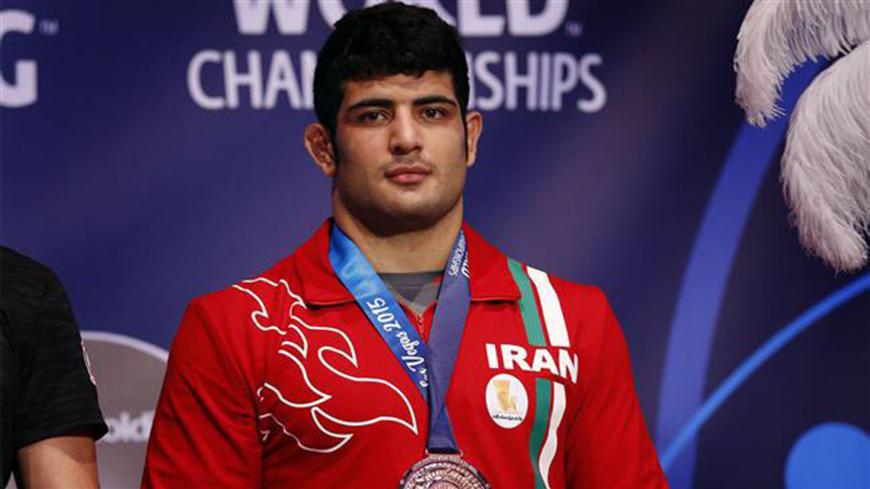 Iranian wrestler Alireza Karimi was asked by his coach to lose to his Russian opponent to avoid competing against an Israeli wrestler. In a clip of the match, shared by an Iranian sports website, Karimi’s coach can be heard saying, “Israel won” and “You must lose.”

It seems that the Iranian wrestler was asked by his coach to lose in a match against Russia’s Alikhan Zhabrailov at the Senior U23 World Championships in Poland on Nov. 25 to avoid facing Israel’s Uri Kalashnikov in the next round.

The Islamic Republic of Iran doesn’t recognize Israel and its athletes, and has always sought a way to avoid competition with Israeli rivals.

After the video went viral, Iranian users on Twitter started the hashtag #Bayad_bebazi (#YouMust_Lose), to express their anger at this occurrence.

An Iranian user under the name of “Ghsrdsht” tweeted Nov. 27, “I wonder who was the first Iranian idiot who suggested not competing against Israelis; what a moron! mixing sports and politics!”

Another user, identifying himself as “The boy who was abandoned,” tweeted Nov. 26, “Have you seen the match video? It is as if all of the Iranian nation is being ankle locked along with [Karimi].”

Mentioning Karimi’s possible vote for President Hassan Rouhani, a moderate, in the May 2017 presidential election, Twitter user Arlo tweeted Nov. 26, “Alireza, #you-must-lose to pay the fine of your finger being inked [when voting].”

Karimi told the press that this was not the first time he had been told to lose a match.

In an interview with the semi-official Iranian Students News Agency on Nov. 28, Karimi said that the same scenario had occurred at the World Youth Tournament in Bulgaria in 2013. “[I was told that] the Israeli opponent has managed to defeat the American wrestler and you should lose to your opponent so that you don’t face the Israeli in the next round,” he said. “When I heard that, I was shocked. It was like a bucket of ice water was poured on my head. I couldn’t stand on my feet. I saw 10 people shouting at me ‘You must lose!’ When I returned to the [match] I completely gave up.”

Karimi then said that despite promises from Iranian officials that he would receive a reward for avoiding his Israeli opponent in Bulgaria, no such reward was given. “I believe that Israel is an oppressor and is oppressing [others]," he said, "but isn’t it oppression if the sports’ officials easily ignore my efforts [again]?”

Explaining the reasoning behind his decision, Iranian wrestling coach Alireza Reza said, “Under that circumstance, the best decision was that our wrestler [had to] lose to the Russian opponent. If Alireza Karimi had defeated the Russian opponent and then hadn’t shown up against the Zionist regime’s wrestler [in the next round], this would cause a serious controversy."

He added, “We had to do this to prevent Iranian wrestling and Alireza Karimi from being banned.”

On Nov. 27, the Iranian Wrestling Federation issued a statement thanking Karimi for what he did in Poland. The statement acknowledges his "sacrifice" and thanks him for "respecting the Palestinian people." It continues, "Perhaps those officials who should be by your side and be thankful of your sacrifice aren’t by your side, but the people who should see you and your sacrifice and appreciate your patience, are seeing you and are by your side.”

With Karimi’s issue turning into a debacle, a number of Iranian lawmakers have asked the Ministry of Youth Affairs and Sports to explain how an Iranian wrestler lost a match due to pressure from his coach.