The Iranian debt market has emerged as a key venue — and battleground — for Iranian President Hassan Rouhani's administration to realize its economic aims. 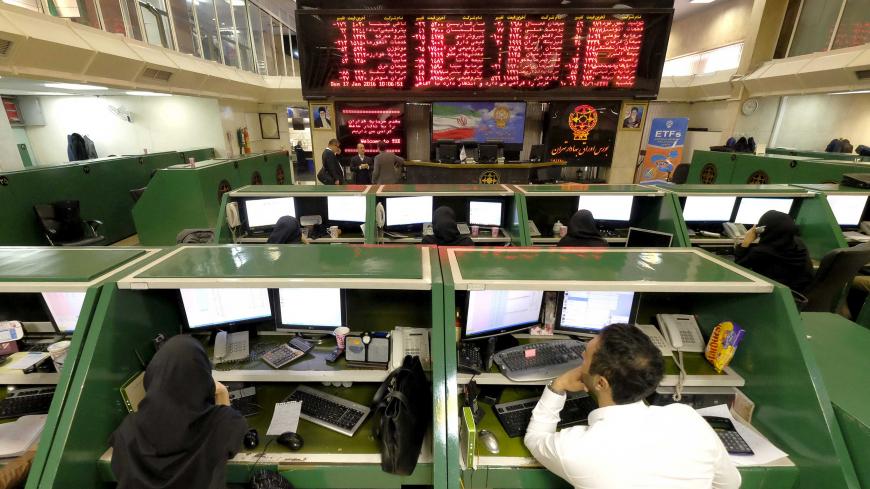 The rising issuance of various Islamic sukuk and, in particular, Islamic Treasury bills in the past three years in Iran is seen as evidence of the success and allure of the Iranian debt market. However, it should be noted that widespread sales of Islamic Treasury bills on Iran’s nascent bond market come at a price.

Perhaps the most important factor contributing to the sales of bonds has been the lack of funds available to President Hassan Rouhani’s Cabinet to pay off overdue debts — mostly inherited from earlier administrations — to private contractors and creditors. As the government did not want to lose its inflationary accomplishment by borrowing from the Central Bank and the banking system, the Islamic Treasury bills market was initially tapped to enable it to fulfill its obligations without raising the monetary base.

But in the Iranian government's budget for the current Iranian calendar year, which started March 21, the public sector, including government agencies and municipalities, is allowed to issue a significant amount of debt securities. Although this helps state-run organizations sponsor new and old construction and infrastructure projects, as well as pay debts from previous years, it might bring about risk of default for future governments.

Amir Hamouni, the CEO of Iran Fara Bourse, a small exchange market, told Fars News Agency Sept. 23, "The risk of municipal bonds in the world is slightly higher than government bonds, and investors typically consider this issue [upon investment].” He confirmed that months have passed since quarterly coupon payments, and he further argued that whether the municipalities have dishonored their commitment remains to be seen, as the issue of defaulting is different from the delay in payment of coupons in his opinion.

According to Hamouni, debt securities have never experienced a default, but the current status of the guarantee of these securities and banks as their guarantors is very tricky given the challenges the banking industry is grappling with these days. This was why the debt market was first formulated and why the government itself took the risky role of guaranteeing these bonds. Likely failure by these entities to comply with their obligations would pressure the Rouhani administration to pile up the debt burden on the ensuing fiscal years, thus blowing a hole in the annual budget balance.

Unfortunately, in the Iranian fiscal year 2016-17, the government permitted various ministries to issue debt securities on their own. This led to a disparity in the rate of returns on bond markets. Indeed, so far, government debt issuance has been essentially concentrated on clearing its debt burden and financing government-priority projects. But the important point to be made here is that there is no prospect of a decline in the size of government debts by solely sticking to the current state of the government's fiscal policies. An analysis of budget figures shows that the government is always forced to settle the past matured securities with the issuance of new ones in a bid to balance annual budgets. This means that government commitments are accumulated and rolled over to later years. In the same vein, different administrations in Iran have always faced a surplus of capital and financial assets while witnessing operational budget deficits. As the excess of capital assets leads to a decline in state investment in the economy, this could, in turn, have negative consequences for Iran's much-anticipated economic expansion.

Additionally, owing to lack or absence of debt statistics and studies on debt sustainability analysis in Iran, it seems that there is insufficient awareness about the stability or instability of such analysis in the country’s public sector economics. Debt sustainability analysis assesses how a country's current level of debt and prospective borrowing affects its present and future ability to meet debt service obligations. According to figures available on emerging countries — being used here as benchmark for the Iranian economy — the ratio of debt to gross domestic product (GDP), as well as the ratio of GDP to gross financing needs (GFN), is moving beyond the standard thresholds of 50% and 10%, respectively. This is likely to put the country’s macroeconomic situation in peril and to call for higher scrutiny of the nation’s debt stock. In the Iranian economy, the ratio of debt to GDP is larger than 60%, and the GFN to GDP ratio is 30%. This means that the debt balance combined with the financing required to pay the current debt is high compared with the government’s financial capability.

Given the government's inability to finance its commitments in the course of the next few years, it is unlikely that Rouhani’s administration will be able to service its financial commitments. Therefore, limiting the GFN is the only policy tool available to stabilize outstanding obligations in the short term.

Furthermore, the downward slide of oil prices alongside the rising costs for plans such as Rouhani-care and the government's promise to pay wheat farmers, have led to the overhang of insurmountable financial obligations. A survey of the status of government debt sales indicates that the balance of issued securities spiked from $3.5 billion at the beginning of the preceding Iranian year to about $12.5 billion at the end of that same year. Most of this surge emerged in the second half of fiscal year 2016-17, specifically the final months of the mentioned period. Of note, the administration is due to pay its outstanding debt obligations, totaling $7 billion, this current Iranian year. However, based on this year's budget, the government can issue about $10 billion worth of Islamic sukuk, or bonds. Nonetheless, there is no separate publication engaged in debt sustainability analysis. There are concerns that being unable to settle debts might trap future governments in a chain of defaults.

Even though more than six months have passed since the beginning of the current Iranian year, the schedule for new debt sales has not yet been finalized. So, again, in the second half of the year, we can expect to see a rapid and high-volume circulation of government securities. This would accelerate the assumed yield on the Iran Fara Bourse debt market. Given the prevalence of the one-year bonds, this vicious circle of debt and deficit could run to next year's debt sales. Furthermore, Iran's banking reforms have not earnestly started yet. The banking system is susceptible to problems in the debt and currency markets, and such problems might spill over to banks in the absence of a well-organized strategy to insulate them against possible crises.

Indeed, properly estimating Iran's budget deficit and introducing practical plans for reforming the budget system could partly pave the way for strengthening discipline and integrity of the young Iranian bond market. Doing so is deemed as an important measure to underpin the interest rate reduction policy stressed by the officials of the Central Bank by keeping bond yields in check.