"Cairographie," a major photo and video festival in Egypt, provides a platform for young artists to show the world what they see through the camera’s lens. 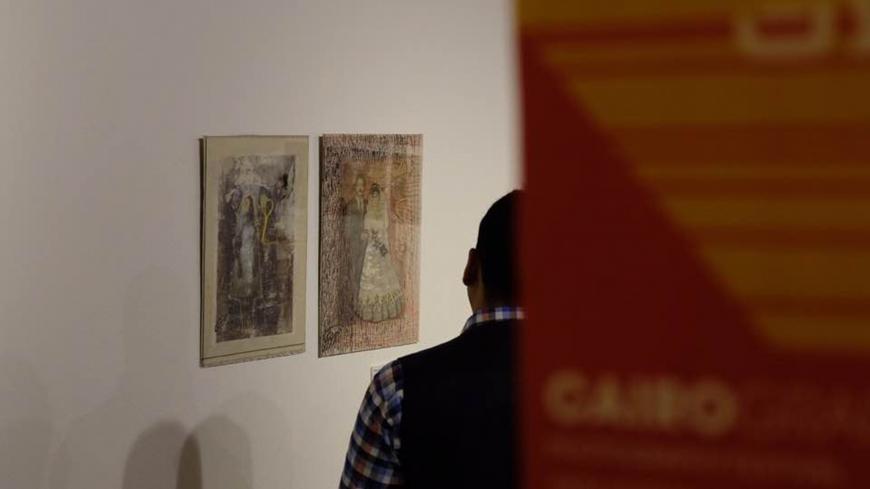 A visitor explores some of the artwork at "Cairographie," which aims to create awareness of contemporary issues, Cairo, Egypt. Posted Nov. 6, 2017. - Facebook/aly.baba.7923

"Art belongs to everybody and nobody. Art belongs to all time and no time," said award-winning British writer Julian Barnes in his novel “The Noise of Time.” This phrase inspired a group of Egyptian artists to choose “transition” as the theme of their photography and videography festival in Cairo.

The first edition of the festival titled "Cairographie" is currently underway (Nov. 5-Dec. 31) and aims to create awareness of contemporary issues — such as the environment, protests, migration and the youth — through photos and videos. Organized by Darb 1718, a contemporary art and culture center in Cairo that was founded in 2008, the festival is supported by Photopia, a hub for photographers in Egypt.

"We want to shed more light on art — especially photography and videography — to enrich the art movement in Egypt," Moataz Nasr, the founder of Darb 1718, told Al-Monitor. Nasr, one of Egypt’s most famous visual artists, represented his country in the 2017 Venice Biennale, arguably the most important art event in the world, with an exhibition called “This too Shall Pass.”

"The group exhibitions create a broad discussion between the audience and the artists. This [dialogue] is the core reason for launching a festival like this," he said, adding that the video and photographical works of 43 artists were displayed.

“We selected the theme of 'transition' this year to highlight the change and transformation that has taken place in Egypt after the January 25 Revolution,” Karim El Hayawan, one of the organizers and the developer of the theme, told Al-Monitor. "The change can be a very personal topic — with a very broad message. It is an open concept in which the participating artists can express their vision about it through photos or videos.”

Hayawan said that the festival’s theme enabled the artists to express transition and change in their own way, whether it is political, philosophical, ideological, religious or intellectual. The works reflect both personal experiences and/or sociopolitical topics such as Egyptian workers, the youth, daily life or architecture.

Participant Reem Akl displayed the suffering of some dark-skinned refugees in Egypt with several photos.

"Some refugees in Egypt suffer from racism due to their dark skin. Uneducated people usually mock them in the streets. … This is a change that has occurred recently in Egyptians," Nasr said.

Farida Nader, another photographer, participated in the exhibition with a series of photos that showed a tree in the street where she lived. The photos showed how the scenery changed after the tree was cut down.

In addition to displayed artworks, the festival features talks and workshops by the artists to share ideas and experiences. In one of these talks, titled "Born to Change: Young Artists on the Rise," Young photographers shared their views and experiences with the audience.

Hamada Elrasam, a freelance photographer, said that after the revolution, the crowds on the Egyptian streets had become hectic and disorganized, so he felt that he had to choose a different photography style to express the chaos.

"In 2012-13, there were demonstrations for and against [former President] Mohammed Morsi. When I went to take pictures of pro-Morsi protesters, people thought that I was a member of the Muslim Brotherhood. When I wanted to take photos for the other side, people thought that I was against Morsi. When I went to cover a protest that had no relation with the previous ones, people asked me why I was there and told me to go cover more important protests," Elrasam said.

"I had the idea of mixing three photos of the three protests together, using the triple exposure. With this project I wanted to express the hectic scene in Egyptian society at that time," he added.

During his talk, Elrasam also expressed his perspective on education in Egypt and what the labor market needs.

He showed a large photo divided into two parts, one of which showed a man sitting in a cafe looking sad and the other showing pupils in a class talking, playing and paying no attention while the teacher explains the lessons to a few focused pupils. The man in the cafe reflects the realization that not everyone who completes his studies can find a suitable job, Elrasam noted.

Nelly El Sharkawy, in her 30s, talked about photography and how she started taking photos of her friends and nature when she was only 17. Then she wanted to create something different. "I mixed two photos to make a single but different one by using double exposure. The result was good," Sharkawy told Al-Monitor.

Then she started taking photos of historic places in different governorates and reflecting on different ideas for her photos. "In Alexandria, for example, I took photos of the poor fishermen and how they live, instead of the usual shots of the sea," she said.

“Photography has a great impact on my personality. I became more courageous and know more people and have seen more places than before," Sharkawy concluded.