The ancient art of ceramics and tile making lives on in Jerusalem, where the artistic tradition has become part of the treasured local heritage. 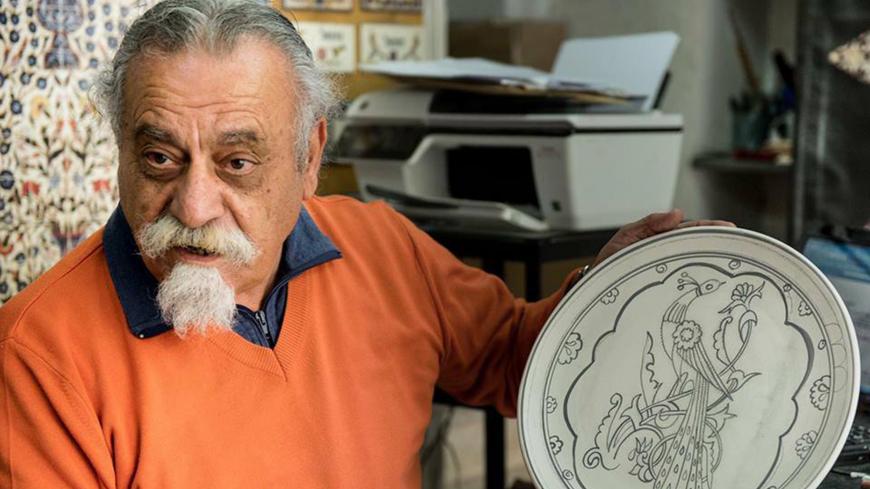 GAZA CITY, Gaza Strip — In his shop in the middle of the Old City market in Jerusalem, Hagop Antreassian sits among an array of colorful ceramic pottery and tiles, a craft that has been practiced by Armenians for 100 years in Jerusalem.

Antreassian, 73, is Armenian-Palestinian and lives in the Armenian Quarter in the Old City of Jerusalem. For 40 years, he has taken great pride in the craft he taught himself, although he fears that the ceramics and tile-making, the mark of the Armenian presence in Jerusalem, may now be disappearing.

Antreassian explains that his family, came from Zeitoun in Turkey’s Marash province to escape the Ottoman Empire’s Armenian genocide during World War I. Now, in southwest Jerusalem's Armenian Quarter, their descendants coexist with Palestinians in the holy city. During the British mandate in 1920, three renowned Armenian families — the Balians, Karakashians and Ohannesians — were recruited to repair the tiles on the Dome of the Rock, a shrine that dates back to the seventh century. Ever since, the Armenian families that settled in Jerusalem have continued the crafts that first made them famous back in the Ottoman Empire, not only as a source of livelihood but as preservation of heritage.

Antreassian told Al-Monitor in a phone call from his Jerusalem residence that he is determined to revive the art form, though the residents of Jerusalem and larger Palestinian cities such as Al-Bireh and Bethlehem do not seem very interested in ceramics. Fortunately, the tourists who come to the Old Market and the Armenian Quarter flock to the tile shops that are part of the historical heritage in this part of town, which includes a closed Armenian monastery and several ancient churches.

Armenian ceramics are some of Palestine's many famous ancient handicrafts such as mosaics, pottery, embroidery, soap and glass, all the mixed heritage of the civilizations that came to Palestine throughout the ages such as the Romans, Canaanites, Byzantines and Phoenicians.

“Foreign tourists from various countries such as France, America, Germany and others come to my small shop to buy Armenian ceramics, which they see as part of the heritage of ancient civilizations in Palestine. But the Arabs and residents of Jerusalem have no interest in buying ceramics,” he said.

He explained that the work is laborious, saying, “Several stages are involved in the making of Armenian ceramics. I start by drawing patterns on the piece, then I use coal for engraving or marking the ceramics. I move to the coloring stage. The completed ceramic piece is then displayed for everyone to see its beauty and glittering brilliance.”

Antreassian said making Armenian ceramics gives him a sense of comfort and peace. His motifs are inspired by old Armenian manuscripts and Armenian decorative arts.

Antreassian is fluent in Arabic, Armenian, Hebrew and English, which he uses to speak with foreign customers. His shop is often filled with tourists. “I make various forms of ceramic pieces at different prices. The smallest pieces are sold for $20, while large prices start at $200 up to $1,000,” he said.

“In foreign countries, they use Armenian ceramics in various sculptures and decorative pieces, but mostly these are not very appealing. They are machine-made ceramics, not handcrafted. When visiting Jerusalem, foreigners rush to buy handmade Armenian ceramics reminiscent of old times.”

Correction: Nov. 17, 2017. An earlier version of this article incorrectly stated when Antresassian learned his craft, the town his family hails from in Turkey, one of the names of the families involved in repairing tiles on the Dome of the Rock, his statements regarding memories of his grandfather, the scenes depicted in his work, the material used in his work, and the languages he speaks. Apologies.