An anti-radicalism center has opened its doors in northern Aleppo and is aimed at rehabilitating young people indoctrinated by extremist groups such as the Islamic State. 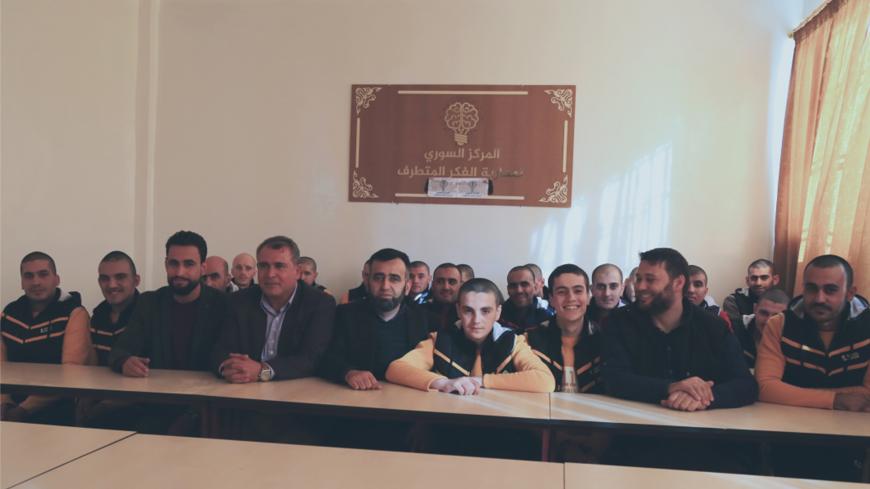 ALEPPO, Syria — The Syrian Center for Anti-Extremist Ideology opened its doors Oct. 28 in the city of Marea in the northern Aleppo countryside. The inauguration was attended by Free Syrian Army (FSA) commanders, local activists, administrators and lecturers at the center, which received its first batch of students the next day.

The center will take in people who have been indoctrinated in the ideology of the Islamic State (IS), putting them through courses on moderate interpretations of Islamic law, and intellectual and cultural lectures. It will also offer counseling and psychological support. The aim is to rid the participants of extremist ideology, with various recreational and sports programs, all offering daily classes over a period of three months.

Hussein Nasser, the center’s director, told Al-Monitor, “Students at the center are all detainees accused of adopting IS ideology, defectors from the group or prisoners who belong to it but were captured during battles between the FSA and IS in 2016 during Operation Euphrates Shield. They have received various sentences depending on the crimes they committed.”

The detainees attend lectures and stay at the center during their prison sentence, and depending on their success can be eligible for reduced terms.

Nasser said 30 students are attending the first three-month course, which include IS sympathizers who worked in civil jobs in former IS-held areas of Syria, as well as people who fought for the group then defected and handed themselves in to the FSA during Operation Euphrates Shield. It also includes foreigners from Europe and Africa who fought for IS in Syria and Iraq and defected before heading to the areas liberated during Euphrates Shield, where they were detained.

The detainees and defectors are forced to attend the courses at the center, which offers lectures on moderate Sharia and human development to allow the students to return to a normal life within society, as well as sports and entertainment activities. According to Nasser, a group of 25 trainers teaches the courses, including professors of moderate Sharia, researchers of extremist groups and psychology experts.

“The center was founded through donations from the local project initiators. We also received funds from FSA factions, which are hoping the center will succeed and see it as an extremely important project,” Nasser said, adding that he is hoping for funding from international organizations involved in countering extremism so the center can further develop and welcome more students and more trainers. Nasser hopes the center would be expanded to better accommodate the students.

The center currently has 10 rooms, half of which were turned into bedrooms for the students. The other half are used for lectures.

Al-Monitor attended a lecture by Sheikh Mahmoud Mohammad, who talked to the students about extremist ideology promoted by IS and moderate Islamic thinking. The lecture took place in a carpeted hall with comfortable chairs and a 32-inch TV screen on the wall for showing video clips and films for education and entertainment.

Nasser explained that at the end of the course, students take tests that are reviewed by a panel of lecturers and trainers from the center. If the test results show that the student has indeed changed his ideology and has become more moderate, he is eligible for a reduction in his sentence and to be released from prison. As for those whose ideology has not changed, they will remain at the center and attend a new course, Nasser said. He noted that the students are monitored throughout the day.

Arsan Khazri, a 28-year-old Ukrainian who calls himself Abu Amira, joined IS in Iraq in early 2015, entering via Turkey and Syria before reaching Iraq’s Tal Afar.

He told Al-Monitor, “I realized IS was lying and doesn’t represent real Islam a year after I arrived there. I began thinking about defecting, and in mid-2016 I went to Raqqa so I could try and leave IS-held territory. I managed to find a smuggler to take me to northern Aleppo in early 2017 for $2,000, and then I crossed into the liberated areas and was detained by the FSA.”

Another detainee at the center is Raqqa resident Abdulaziz al-Ubaid, 30. He joined IS in Syria in mid-2014.

“I only stayed with the group for three months, then left it and worked as a greengrocer in Raqqa until early 2017,” he told Al-Monitor. “As the Syrian Democratic Forces closed in on IS in Raqqa, I thought of leaving. I paid a smuggler $1,200 and managed to reach the liberated areas where the FSA detained me.”

Ubaid said he had not committed any crimes during his short time with IS, during which he worked as a guard for a military base in the city of Raqqa, in northeastern Syria. He was optimistic about the center’s courses and believes he will be released so he can return to his wife and child in Azaz once he finishes the course.

Hassan al-Daghim, a lecturer and member of the center’s board, said the center focuses on offering psychological treatment to people who had been attracted to joining IS.

He told Al-Monitor, “The center was set up in Marea in the northern Aleppo countryside, which has a lot of military experience in fighting oppressors. We hope that this can be a catalyst. The center is the first step toward changing the thinking of many young people who got caught up in the ideology of extremist groups.”

The Syrian Center for Anti-Extremist Ideology is a small step, but its founders hope it can achieve its goal. To do so, it will need major support so it can develop its programs and bring in a larger number of young people who have adopted the ideology of extremist groups in Syria.