Where is Israel's left heading?

Meretz leader Zehava Gal-On and Labor chief Avi Gabbay are well-aware that the left camp is shrinking and are each taking actions in an attempt to change this. 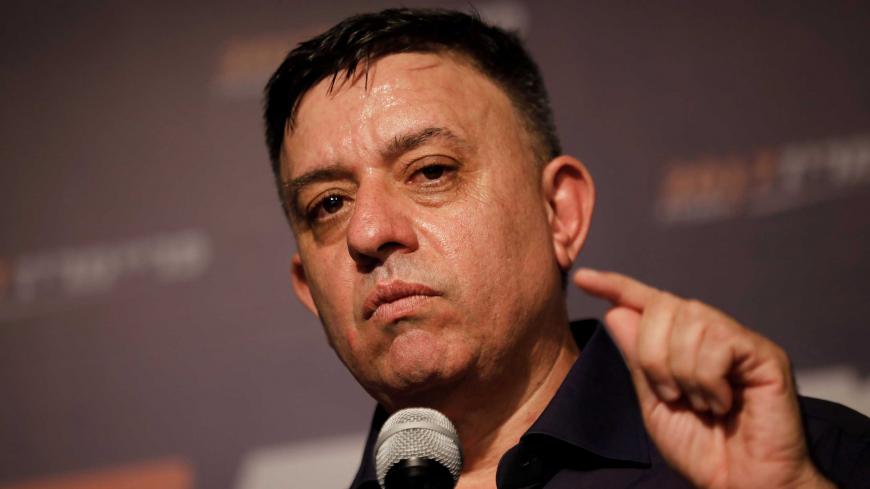 Recent "right-wing" statements by Labor Party Chairman Avi Gabbay and the resignation Oct. 18 of Meretz leader Zehava Gal-On from the Knesset are two facets of the deepest crisis ever experienced by Israel's historic left.

Ostensibly, there is no connection between these two political events, which occurred in the only two left-wing Zionist parties at around the same time. Nevertheless, they point to confusion on the left and an ongoing effort to extricate itself from its long-standing irrelevance to the Israeli public.

Gabbay is more than just a new figure in Israeli politics. He is also very new to the left. He grew up in a Likud home and decided to join the Labor Party in 2016, with the explicit purpose of being elected its leader so that he can run for the position of prime minister. He has an instrumental, business-oriented worldview, rather than a romantic perspective, which is why he is neither enamored with nor tied to the economic or diplomatic positions of the left. He certainly does not consider the 1993 Oslo Accord to be sacrosanct and inviolable.

Gabbay supports the two-state solution as a pragmatic position that accords with the basic worldview of the left electorate. It was in this vein that he made a “leftist” comment on the night he was elected, on July 10, saying that it is time “for leadership that takes care of [periphery town] Dimona — and not just of [evacuated settlement] Amona."

Some three months have passed since then. In that time, Gabbay realized that speaking out against the settlements could win him support from the left, but at the same time, there is no doubt that it will keep him away from the premiership. His Oct. 14 statement that he would not sit in a coalition with the Joint List of predominantly Arab parties, and another statement two days later during an interview with Channel 2 that he would not evacuate settlements as part of a peace agreement, are lifted directly from the political lexicon of the right.

In fact, with these statements, Gabbay was able to bypass Yesh Atid Chair Yair Lapid on the right, without blinking an eye, while leaving senior members of his party stunned. Co-leader Tzipi Livni of the Zionist Camp — of which Labor is the major partner — disassociated herself from his remarks about the settlements by clarifying immediately that this was neither her position nor the position of the Zionist Camp. Yet despite the commotion that ensued within the party, Gabbay would not walk back on his statement. Instead, he explained that while he supports a two-state solution, he is also looking for creative ways to implement it.

Since the assassination of Prime Minister Yitzhak Rabin in 1995, not a single Labor Party leader dared to veer away from the paradigm of the two-state solution, even though the cost was clear: partition of the land and the partition of Jerusalem. In that sense, Gabbay has just switched strategies, and in doing so, redefined the diplomatic agenda of Israel's major left-wing party.

In contrast, Gal-On represents the most committed and consistent left. She heads a party, Meretz, with just five seats; yet in the last few months, she has been caught up in a party leadership crisis, culminating in a party convention Sept. 17, which discussed removing her in an effort to bring in new blood. The unrest within Meretz is an expression of the major crisis facing a minor party, which spent all of the last few elections struggling to survive, when it was uncertain that they would pass the voter threshold. The ideological left remains caught up in the crisis resulting from the Israeli public's exhaustion with the stagnant negotiations with the Palestinians and the feeling that there is no partner on the other side. Its electorate has started to abandon the party, and Meretz is losing its relevance.

Realizing that she had to do something, Gal-On decided to resign from the Knesset and focus on political activity within the party as its chair. That would allow her to convince the party committee to support open primaries. This, she feels, would refresh the ranks and rescue the party, which she believes is acting more like a private club.

Gal-On will be replaced in the Knesset by Meretz Secretary-General Moshe (Mossi) Raz, who is just as open-minded and aware of the problems facing his party and the left. In a conversation with Al-Monitor, Raz said that he is well-aware of the need for changes to the party's positions, to make Meretz relevant. At the same time, however, he also said that the motives for such changes must be more than just an attempt to pander to voters. Still, Raz admits that changing circumstances should be investigated, "and there is room for rethinking in several key areas, in an effort to hone our positions. So, for example, I think that the negotiations with the Palestinians are bankrupt, and we should consider other options such as international arbitration."

The Israeli left has always been committed to the idea that negotiations with the Palestinians are the only way to achieve a two-state solution. In that sense, Raz's statement was groundbreaking. It represents a new way of thinking, which also reflects the realization that the ideological left must adapt itself to changing circumstances.

Since the signing of the Oslo Accord, it was frequently said that the left loses at the ballot box but wins in the public's awareness. The fact is that the two-state solution has become a fixture among the public as the only way to reach a peace agreement. All prime ministers since Rabin have adopted the two-state solution, including Benjamin Netanyahu. During his first term as prime minister, Netanyahu actually implemented parts of the agreement (1997 Hebron Accord).

In 2000, Prime Minister Ehud Barak, who was also head of the Labor Party, tried to reach a deal with PLO leader Yasser Arafat, which included a compromise on Jerusalem (Second Camp David Summit). The attempt failed, and the second intifada erupted soon after.

After Barak, Prime Minister Ariel Sharon also adopted the two-state solution and implemented the disengagement from the Gaza Strip in 2005. As head of the Kadima Party, Prime Minister Ehud Olmert took the boldest step of all. In his negotiations with Palestinian President Mahmoud Abbas, Olmert agreed to evacuate most of the West Bank territories and divide Jerusalem.

Even Netanyahu declared his support for a two-state solution in his Bar Ilan speech, when he returned to the prime minister's office in 2009. In the past few years however, as Netanyahu became more entrenched in power and negotiations with the Palestinians came to a halt, the public shifted to the right, convinced that there was no Palestinian partner with whom to make peace. Nevertheless, the parties on the left continued to cling to the old order without considering any alternatives. And they continued to lose relevancy.

Now that it has reached such a low point, the left has the potential to extricate itself from this crisis. This does not mean abandoning the two-state solution. There is, however, room for making its ideology more current. In that sense, Gabbay was right to do what he did. The problem is that it seems obvious that he was really driven by calculated and momentary electoral considerations and little else. That's precisely where the risk lies.