The tense inauguration ceremony for new Chief Justice Esther Hayut was a sign of things to come, with subtle threats and promises haunting the festive televised event. 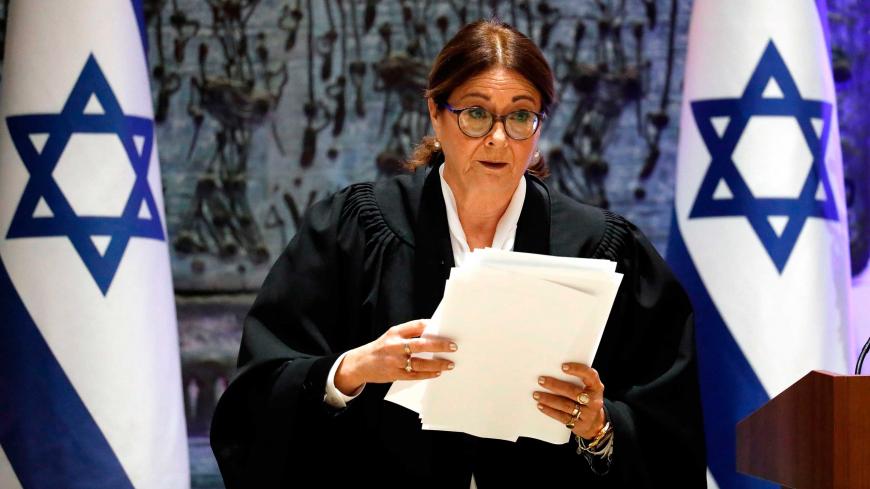 The new president of Israel's Supreme Court, Esther Hayut, cannot expect a moment of rest. During her inauguration at President Reuven Rivlin's residence, Justice Minister Ayelet Shaked informed her that she plans to move ahead with the new judiciary law intended to reduce the power of the Supreme Court. Shaked made her calculated remarks at the festive state ceremony in a very calm tone that contrasted sharply with their content.

Shaked believes that the Supreme Court has become a political player. Her opinion is well known, as is her plan to restrict the court's authority. Of course, Shaked could have chosen to offer a much more agreeable reception for the new chief justice, but instead she decided to stick the knife in and twist as the celebration reached its climax.

Shaked spoke about how, over the past few decades, and especially since the country's constitutional revolution, the Supreme Court has, to her chagrin, become "a body that is perceived as one of the parties in each public debate. This," she continued, "has resulted in a significant decline of public trust in the institution." She then announced that she plans to advance a constitutional initiative in which the Basic Law on adopting legislation would include a new clause allowing the Knesset to pass laws overturned by the Supreme Court. As she put it, "The dramatic advantage of this dialogue will be that the Supreme Court will no longer be perceived as an active player in the political arena, with the privilege of having the last word."

Shaked essentially used Hayut's first moments on the job to inform her that she intends to charge full steam ahead with her plans to weaken the very institution that Hayut now heads.

The justice minister, who holds the No. 2 position in HaBayit HaYehudi, is a rising star in Israeli politics and already one of the most senior figures on the hard-core right. Her camp sees the Supreme Court as the settlers' archnemesis. Her statement of intent, delivered on live TV during an important ceremony for Israel's legal system, was clearly motivated by electoral interests.

But Shaked's speech was not the only contributor to the charged atmosphere at the ceremony. It was hard not to notice that the body language in the interaction between Rivlin and Prime Minister Benjamin Netanyahu oozed frigid animosity. Though the two men sat beside each other, they barely exchanged a glance, never mind a word. The event came soon after Rivlin's speech at the Oct. 23 opening ceremony for the Knesset's winter session, in which he accused Netanyahu of trying to intimidate the harried gatekeepers of law enforcement. Netanyahu has long considered Rivlin to be hostile. Now he can barely look at him.

Sitting two rows behind Netanyahu and Rivlin were Police Commissioner Roni Alsheikh and Attorney General Avichai Mandelblit, who together head the institutions that will decide Netanyahu's legal fate in the coming months. Netanyahu appointed both of them in the belief that they would be light-handed and defend his entanglement in various criminal investigations. Over the past few weeks, however, he has come to feel otherwise.

Thursday's Supreme Court ceremony was not a happy one. Her voice choked with tears, outgoing Chief Justice Miriam Naor finished her speech with, "Finally, a personal note to President Rivlin. Happy is the nation that merited having you as its president." Her emotional remarks expressed the enormity of the disturbance that the Supreme Court is undergoing. Politicians on the right attack it and plot to weaken it daily. Naor herself faced a very challenging and tense period when she tried to protect the court's authority and independence. In these turbulent times, when even the prime minister is contributing to disturbing legislative initiatives, Rivlin was always someone Naor could rely on. This was her way of thanking him.

Meanwhile, Hayut used the occasion to make it clear that she has no plans to concede to Shaked. In her speech at the ceremony, she said, "I pray that we succeed in preserving this indomitable structure and ensure that it does not crack and is not harmed. This prayer is more necessary today than ever before due to disconcerting attempts to attack the status of the judiciary branch. … This is in no way a power struggle over who controls the courts, but rather a struggle for us to fulfill the role imposed upon us as judges."

Hayut can expect a very turbulent term in office. She is well aware of the seriousness of the processes underway to turn the Supreme Court into a toothless body ruled by politicians.

Legislation to weaken the Supreme Court is not the only issue she will have to contend with. She will also have to confront ongoing delegitimization efforts by ultra-Orthodox politicians. On the morning of Hayut's swearing-in ceremony, the Supreme Court ruled on the operation of supermarkets in Tel Aviv on the Sabbath, adding another layer of tension to an already charged situation. The ultra-Orthodox were quick to lash out against the court and announced that they would take steps to advance a law circumventing it regarding the supermarket decision.

Anyone who expected Netanyahu to stand firm in support of the judiciary has been proven wrong. He may have done so in the first few years following his return to power in 2009, but the Netanyahu of the current administration has long since abandoned any hint of loyalty to officialdom. Netanyahu may have spoken in praise of the judiciary at Thursday's ceremony, but he also managed to find a way to depict the political attacks on the Supreme Court as positive. "The tensions between the three governing authorities exist in every democratic state. It is natural and healthy," he said, adding, "In all democracies, there has been a constant debate about marking the boundaries between the branches. This is not a violation of democracy. Rather, it is the essence of democracy."

Is that so? What about the attacks by Tourism Minister Yariv Levin, a senior Likud member who claims that the Supreme Court is leftist and that it threatens the very existence of the State of Israel? Is that the essence of democracy?

One thing is certain. The right-wing governments of the past few years have contributed to the erosion of the Supreme Court's stature among the public. Its denigrated justices are forced to contend with explosive decisions left at their doorstep, often because of the political system's weakness. This is what happens whenever the issue of evacuating settlements comes up.

Hayut's inauguration ceremony shined a spotlight on the intensity of the rift between the three government branches and the rapidly escalating war between the Supreme Court and the right-wing politicians seated around the Cabinet table.