A long-besieged pocket of Islamic State-held territory and surrounding villages in north-central Iraq have been retaken by a mixture of local Sunni and non-local Shiite-led Popular Mobilization Units, alongside Defense and Interior Ministry forces. 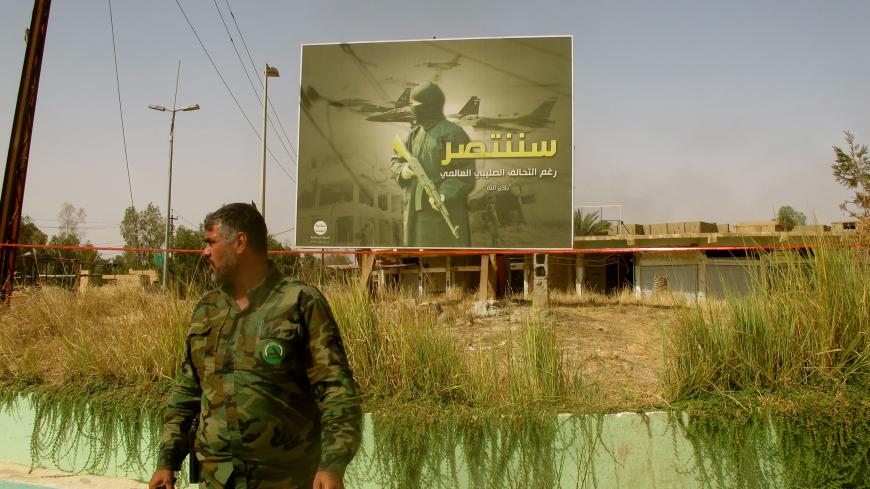 A member of the Ali al-Akbar Brigade associated with the Popular Mobilization Units stands in front of an Islamic State billboard in a square in central Hawija, Iraq, Oct. 5, 2017. The billboard reads "We will prevail despite the global crusader coalition." - Shelly Kittleson

HAWIJA, Iraq — The initial push into the Sunni city of Hawija as part of anti-Islamic State operations on Oct. 4 was spearheaded by a Shiite-led Popular Mobilization Units (PMU) force known as the Ali al-Akbar Brigade, according to both locals and the leaders of the group itself.

Al-Monitor accompanied the Ali al-Akbar Brigade on Oct. 5 as it cleared the city center and several residential areas with tanks and infantry, meeting only a few snipers and suicide attackers.

Invocations of historical figures revered by the Shiite sect were ubiquitous, from the Ya Hussein flags flying from tanks to the cries of "Ya Zahra" as Shiite fighters from southern Iraq and turbaned clerics accompanying them ran across streets that were open to sniper fire.

The Ali al-Akbar Brigade is one of the units associated with the Shiite holy shrines in the south of Iraq. It was created in response to Ayatollah Ali al-Sistani’s 2014 fatwa calling on Iraqis to take up arms against IS, in contrast with many of the other Iranian-funded armed groups that had existed in some form prior to it.

The Ali al-Akbar Brigade is said to have sustained more casualties than any other force aligned with the PMU that are involved in the fight for Hawija. It was criticized by some residents of nearby towns in close contact with security forces, who said that it had moved forward without agreement from the other forces involved. Al-Monitor could not verify this information.

Al-Monitor spoke to a number of Sunni residents from the city who had been living for years in nearby towns, one of whom said the PMU "broke ranks to get for itself any valuables and money left by IS and residents." They assumed that the only motivation would have been this. They also said they had relatives whose cars and valuables had been stolen, but they presented no proof and spoke on condition of anonymity.

Al-Monitor did not see any clear looting during its time spent in the city. However, it was repeatedly denied access to many areas due to the reported risks of improvised explosive devices (IEDs).

PMU spokesman Ahmed al-Assadi told Al-Monitor in an interview as clearing operations were underway that all PMU forces "take their orders from the prime minister and the PMU leader," and those from the official PMU accused of crimes are taken before a judge assigned specifically by the federal courts to deal with PMU cases.

In response to a question about PMU forces stealing from local residents’ homes, he laughed and said, "We’re not angels," adding that any official complaints would be investigated.

Al-Monitor was told in an interview Oct. 5 in the central square of the town with Ali Hamdani, a former air force officer and an Ali al-Akbar Brigade leader from Karbala, that "according to our sources and intelligence services, there are over 600 IS fighters still currently headed for the peshmerga [forces] and northern Iraq,’’ presumably to try to flee by passing themselves off as civilians or to hand themselves over to an armed force seen as less likely to kill them.

Though the Iraqi security forces have loathed releasing casualty figures for most of the anti-IS operations from Mosul, widely-reported deaths in the Hawija fight included a commander of the Interior Ministry’s Emergency Response Division sniper unit and a popular veteran fighter known as the "sheikh of snipers."

As early as Oct. 5, members of the PMU’s media unit were putting up billboards to honor PMU "martyrs" around the city.

On the morning on Oct. 5, Al-Monitor was to have accompanied a local PMU fighter to the al-Abbasi area alongside a Salahuddin province SWAT team as they returned to take over security. The town had been liberated by a Shiite-led PMU almost a week before and then handed over to a Sunni one before the planned subsequent handover to young armed men from the area itself.

But Al-Monitor was prevented from going with the SWAT team by PMU security officers who took us to a remote logistics base until a member of the PMU media team vouched for the accuracy of our reporting and came to pick us up. Al-Monitor was taken to the PMU war media headquarters set up in a nearby town prior to being allowed to return to Hawija, accompanied by a member of the team.

On Oct. 4, Al-Monitor had entered a home that seemed to have been used as an impromptu jail, with bars drilled into the walls for additional reinforcement of doors — finding dirty blankets, antibiotics, steroids and papers listing the names of those on guard duty — but were denied access to another jail found by the forces, due to security reasons.

A mural of a smiling young boy and a girl not wearing a headscarf and holding hands featured prominently on the outer wall of a nearby school, starkly at odds with the blacked-out faces of children painted on former school walls seen by Al-Monitor in Aleppo after IS was pushed out of eastern parts of the city it had held for only a few months.

IS took over Hawija in June 2014 and was in control of the city for over three years.

Upon returning in the early evening on Oct. 5 — then accompanied by a member of the PMU official war media team after visiting the impromptu jail — Al-Monitor was taken to another location used as a jail. The rooms had been swept clean, and the armed men nearby said that no IEDs had been found in the area. No signs of torture facilities similar to ones in detention facilities previously run by IS and seen by Al-Monitor in Aleppo, Sinjar and Mosul were found.

Meanwhile, relatives of residents of Hawija who disappeared years ago and are believed to have been arrested and possibly killed by IS gathered informally in a nearby town throughout the operation to check Facebook postings and exchange rumors of the latest news on possible locations of prisoners.

Al-Monitor was shown several photos in conversations over a number of evenings spent with them and was repeatedly asked to show them to anyone found in the city that might have information on their whereabouts.

Security sources told Al-Monitor that most of the IS fighters had also vanished, fleeing shortly before Iraqi forces entered. Most left to Kurdish-held territories, where they assume their lives are less at risk, or to the Hamrin Mountains, the sources added.

Tikrit lies close to one side of the mountain range and Hawija and Kirkuk on the other. The Hamrin Mountains have long been considered by many Kurds as the border of any future state for them and are part of the disputed territories at the heart of past and present discord between the Iraqi central government and the Kurdistan Regional Government.

The disappearance of many alleged IS fighters in that direction may further exacerbate existing tension, while perceptions of non-local PMUs by local ones may also pose a danger to fragile peace in the area.

For now, jubilance over areas finally liberated from IS remains tinged with wariness.