Mud, rocks on menu in Beirut for Sharjah cultural event

One of the major contemporary art experiences in the Middle East, the United Arab Emirates' Sharjah festival, held events in Beirut, Istanbul, Ramallah and Dakar. 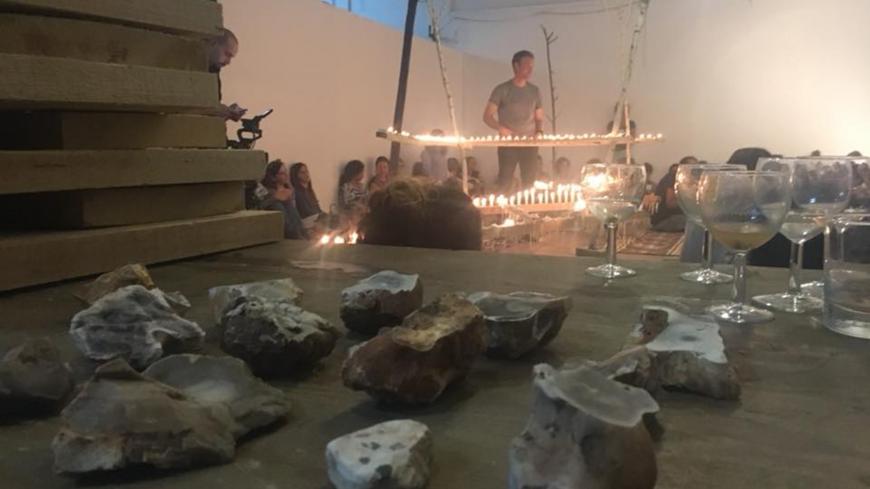 Rocks on the table as Ian Kerr, a member of Spurse, talks during a performance called “Tasting the Future,” Beirut, Lebanon. Posted Oct. 14, 2017.

The large tasting table, placed at the center of the Station Beirut cultural space, contained an eclectic assortment of rocks marinated in sauces, seawater with smoked salt, and filtered and boiled mud. The more-edible items among the 87 samplers featured were berries and fruit, but observers were also told they could taste or lick the rocks. The culinary "performance" was called "Tasting the Future," and the conversation accompanying the meal was about the history of food and people's connection to it.

Ian Kerr is a member of Spurse, the creative design consultancy responsible for the performance. During the tasting, he talked about how people relate to food — addressing an audience reluctant to taste stones. Food is a major medium of dialogue, Kerr told Al-Monitor, as people know about their local cuisine and are eager to share it.

“Everyone knows what their parents used to cook, so we are talking to people about pleasure, joy and curiosities [of the food they consume]. Art may be inaccessible sometimes, but you can make food at home,” he said, underlining that while not everyone creates or has access to artwork, most everyone cooks.

Kerr said the rocks and sea salt on the table are intended to demonstrate that the food we consume is part of an ecosystem to which all people belong. “The goal is to make people see larger movements of migration, history and society.”

"Tasting the Future" was one of three food performances in Station Beirut under the theme "Upon a Shifting Plate," an expression attributed to American poet Emily Dickinson’s “Fame Is a Fickle Food.” "Upon a Shifting Plate" included talks and walks, workshops, tastings and cooking sessions, all aimed at exploring the production and consumption of culinary heritage and how our eating habits shape our psychological and cultural dispositions.

The performances were part of the Beirut component of the Sharjah Biennial event, which the Sharjah Art Foundation in the United Arab Emirates has organized since 1993. This year's edition, SB13, was curated by Christine Tohme, the founding director of Ashkal Alwan, a Lebanese association for plastic arts.

The title of the biennial this year was “Tamawuj," a noun in Arabic that means the rising and falling of waves. On Sharjah Art Foundation’s website, this title is described as “a flowing, swelling, surging, fluctuation or a wavy undulating appearance, outline or form.” It also says the title reflects SB13’s aims to cultivate collaborations between Sharjah and local partners.

SB13 has been going on since the beginning of 2016 in various locations. The finale took place Oct. 14-22 in Beirut and included lectures, performances, films and exhibitions.

The main goal was to decentralize, rather than having the biennial in a single, fixed setting. As part of the effort to decentralize, the two main events were held in Sharjah and Beirut, and three other off-site projects took place in Istanbul, Ramallah, and Dakar, Senegal.

The biennial also focused on the way young communities explore revolutionary ideas and challenge authority through an exhibition titled “An Unpredictable Expression of Human Potential,” curated by Hicham Khalidi, the associate curator for Lafayette Anticipation. Located at the Beirut Art Center, the exhibition focused on youth culture, social anger and unrest, and urban environment, as viewed by about a dozen young and upcoming artists.

At the entrance of the exhibition, the audience was welcomed by the sound work of Mohammed Bourouissa from France, who recorded and mixed sounds from the Sunday market in Beirut, an informal, traditional market. The sounds accompanied photos taken by French photographer Dorine Potel of cars displaying products to sell on the market of Tripoli. Potel told Al-Monitor the ideas work well together.

“My pictures are about seeing how life is organized outside official structures, in a poor and popular area with people from all origins and with different stories," Potel said.

Other works were more openly rebellious, such as a bronze bread broken on the floor, films about migration and youth, or pictures of rough neighborhoods. Dala Nasser, a Lebanese artist, exhibited a piece made out of turmeric because of the health-food trend. “I think the art world is turning a blind eye on real issues, but it needs to be reminded [of what is happening in the world from] time to time,” Nasser told Al-Monitor.

At the Sharjah Biennial, the themes and topics addressed were anything but light. Khalidi told Al-Monitor, “The exhibition is built on the idea of young people’s position today on issues such as refugees or post-colonialism and they want long-term solutions for those crises. The youth [are] now confronting policymakers who are only thinking short-term.”