In the process of increasing visibility of Islamization, wedding invitations become contested territory in Turkey. 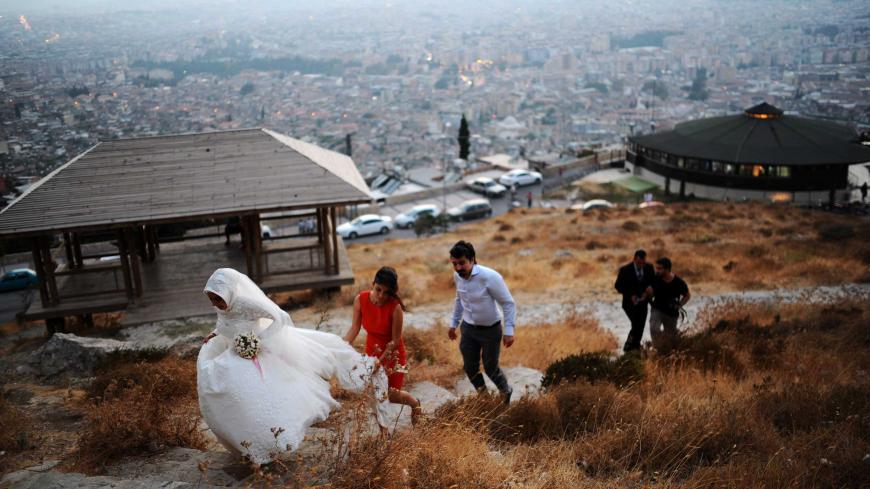 A newly married couple walks up a hill with a view of the city of Antakya, Turkey, Aug. 29, 2013. - BULENT KILIC/AFP/Getty Images

The photo of a wedding invitation  — a rather ordinary one with golden letters on a dark background —stirred up a hornet’s nest in Turkey’s Twittersphere in late August. While the invitation carried the name of the groom and the fathers of the new couple, there was no trace of a bride or female figure on it. The invitation spurred a major debate with a flurry of questions: Who is the bride? Why isn’t her name on the invitation? What about the mothers of the bride and the groom? Is this another way to erase women from the public space?

Then the social media debate turned to just how a Muslim wedding should be held. This discussion came at a time of concern about a recent bill that, if passed, will allow muftis to conduct weddings. There are two pragmatic reasons for this controversial bill. First, during the last decade, the Justice and Development Party (AKP) governments have trained and certified thousands of imams, muftis and vaiz (preachers). These people need employment. Second, as Islamic education is spreading, demands that Islamic law be applied in daily affairs have become more prevalent. These demands need to be met for President Recep Tayyip Erdogan to continue his populist rule. Although the majority of civil Turkish marriages also seek the blessings of a religious figure, religious weddings performed by clergy have no legally binding status. That is to change if the bill becomes law.

But the debate on just what constitutes an Islamic wedding does not end with the person performing the ceremony. It extends to the other parts of the wedding, from what is served to who is there, how the bride is dressed and, now, whether her name will be on the invitation. Yet budgetary concerns and accepted norms (of the family and the community) bring quite a wide variety in the hefty sector of conservative weddings.

The first Islamic wedding I attended was about 25 years ago in an upscale neighborhood of Istanbul. Two ballrooms were reserved, one for the men and the other for the women. The bride, one of my closest friends, wore a headscarf but not a veil. Her conservative wedding dress covered her shoulders and neck. The five-course meal, expectedly, included no pork and no alcohol. The servers were female. A band of female musicians played Turkish music. In fact, there was no male presence in the room except for a few toddlers. We got a glimpse of the groom when he came in with the bride to pay his respects to the elders in the room briefly, then he moved to the men’s section. The bride did not visit the male guests, nor did she appear in any photos with male relatives. There was a female photographer early on at the wedding in the women’s room, but as women started removing their scarves and coats, photography was not allowed.

Weddings are the right place to show just how pious you are, according to Nurettin Yildiz, a popular and controversial Islamic scholar. Reminding their followers that “the conscious of a true believer comes out during a wedding,” Yildiz and several other religious figures advocate gender separation. Yildiz takes it a step further and harshly criticizes the bride who appears in photos with males who are not her close relatives. He ridicules Muslim couples who act as if Islam doesn’t apply during weddings.

Another popular imam, known by the alias Cubbeli Ahmet Hoca, made headlines with his daughter’s wedding in May 2015. Cubbeli Hoca is from the Ismailaga religious order where members are expected to wear a full niqab, yet his daughter appeared in a white wedding gown to the disapproval of her media-savvy father.

On the other hand, Erdogan’s youngest daughter — and presidential aide — Sumeyye’s wedding was a far cry from Cubbeli Ahmet’s daughter’s ceremony — a point duly noted in the media. Erdogan’s ceremony was not gender segregated, and both the president’s daughter and other female attendees appeared in coed photos.

However, all Islamic weddings have common points. The first is the attire of the bride: She must cover her hair. Second is the beverages; there is no alcohol. Third, while there is music, dancing — particularly coed dancing — is discouraged. Rather, recitation of the Quran or shows of whirling dervishes and religious music is common. There may be entertainment for kids, such as puppet and janissary shows or folkloric dances. Several wedding planners told Al-Monitor it is more expensive to have a hafiz (one who has memorized the Quran) who can recite the Quran than dancers to perform at weddings.

Yet all these options for entertainment also generate criticism. Several conservative Muslims shun turning religious practices into commercial shows, such as the recitation of the Quran or a dervish show while guests are eating and are distracted.

Bayram Iscan, a wedding photographer, told Al-Monitor that he has served people from all walks of life and, over time, the wedding sector has become more complicated, not to say showy, with several different services. He explained that in certain conservative settings, the bride and groom may prefer to use the latest drone and Jimmy Jib camera technology (a man-operated camera crane) to record their wedding. In addition, a pre-wedding shoot, which is commonly referred to as a “save the date,” is quite popular. On this day, the couple will travel to one or multiple locations depending on their budget and record a video clip. Some of these clips resemble short films or music videos. In addition, several upscale and extravagant Islamic weddings with fireworks, huge cakes and hundreds of guests are quite similar to secular ones, except for prayers and the bridal attire.

Another criticism about Islamic weddings is the fact that Islam advocates modesty. As conservative Muslims have started climbing social and economic ladders in Turkey, their weddings have become extremely lavish. Indeed, showing off to others has become the main goal of these weddings.

So here is the dilemma of Islamists: While advocating for separate public domains for men and women, they demand that women be served by women. Yet, ironically, it is also these conservatives who advocate for women to stay at home. A wife of a conservative AKP bureaucrat tackled this dilemma, telling Al-Monitor: “It all depends on who you are — that is, who your family is. If your family is financially well to do and has proper political connections, if your husband allows, then you can get a cushy government job and have your government car and you have domestic help. If you are poor, you do not have a choice. Then you work in an underground economy. So in a sense, new conservative elites are generating a female-only workforce that is mostly manual jobs.”

The population of this women-only underground economy is growing from daily cleaning ladies to waitresses at women-only cafes. Yet the female workforce in these places also realizes that while Islam promises equality and modesty, the arrogance of the Islamist clientele is not different from the seculars. The resentment among these working-class women, most of whom are pious Muslims, toward Islamist elites should be the real focus of Turkish opposition rather than quirky wedding rituals of fake Islamists.