How Israel's support is swaying Kurdish sentiment ahead of referendum

Turkey’s Kurds may have divergent views on Israeli backing for the referendum in Iraqi Kurdistan, but their support for the independence bid remains robust. 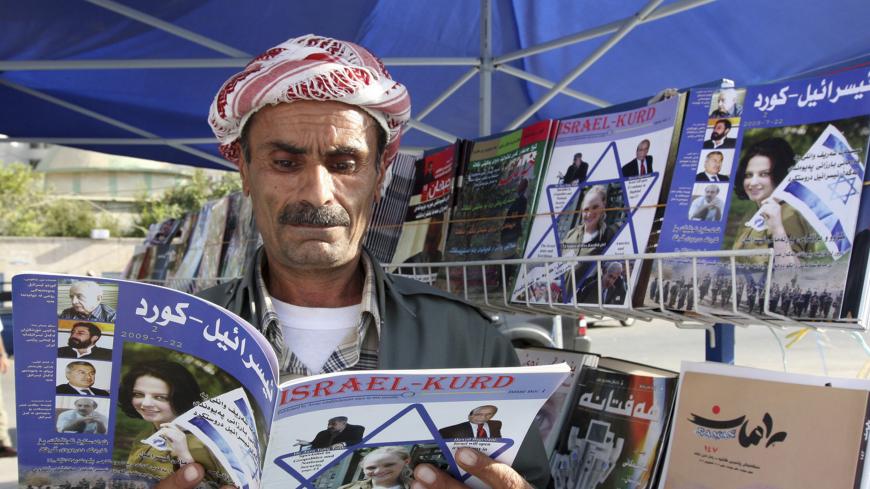 DIYARBAKIR, Turkey — Seated in the shade of Diyarbakir’s ancient city walls, a group of elderly Kurds animatedly discuss the independence referendum that affects their kin in neighboring Iraq. The mood of the conversation seems to sour when the topic moves to Israel, the sole country to have openly endorsed the Kurdish bid for statehood. The men, whose demeanor reveals they are pious Muslims, are clearly unhappy with Israel’s support, a sentiment that is widespread in conservative Kurdish quarters.

“No good will come from anything if Israel has a finger in the pie. If [Kurdish statehood] is going to happen with Israel’s support, then best it doesn’t happen at all,” 65-year-old Mustafa Sayar told Al-Monitor, as the others in the group approved.

Their view, however, can hardly be described as an overwhelmingly popular one among Kurds. Civic society activist Mithat Akcan, for instance, is among the Kurds who welcome the Israeli backing. “While scores of Muslim countries around Kurdistan, small and big, oppose the referendum and are thinking of myriad sanctions and even war, Israel’s support is positive and on the mark,” he told Al-Monitor.

In Turkey’s nationalist and conservative quarters, Kurdish gains are routinely viewed with suspicion, perceived as American or Israeli “ploys” or conspiracies to divide Turkey or sow foment in the Muslim world. The same themes are abuzz again in the nationalist, conservative and pro-government media, with the news outlets underscoring Israel’s support for Iraqi Kurdistan.

Regardless of their political affiliations, Kurds overwhelmingly back the independence referendum. Israel’s support, however, has become a point of contention between conservative Kurds and the others.

Huseyin Yilmaz, the deputy chair of the Kurdish-dominated Islamist Free Cause Party (Huda-Par), believes that Israel is not sincere in its support and, therefore, its backing will not harm the Kurdish cause.

He has his own theories on why Israel would back the Kurds. “First, by openly declaring its support for the referendum, Israel is actually trying to foment discord among Muslims. By doing so, it is seeking to hamper the support that Muslim individuals, groups or countries might give to the referendum. In other words, it is trying to strengthen the hand of the opponents of the referendum,” Yilmaz told Al-Monitor.

And if the referendum succeeds, he argued, Israel will seek to exert influence over Kurdistan, expecting gratitude for its support. “It will try to implement its projects and exercise dominance over the new state. It will try provocations to pit that state against its neighbors. Most importantly, it will try to make that state dependent on Israel,” he added.

Referring to arguments that an independent Kurdistan would become a “second Israel” in the region, Yilmaz said, “If so, we are asking neighboring states why they are leaving the Kurds dependent on Israel. We are calling on Turkey to embrace Kurdistan as a big brother, as [the inheritor] of the Ottomans. Don’t push the Kurds into Israel’s lap and don’t make them dependent on America and the imperialists.”

On the opposite side of the political spectrum, Bayram Bozyel, the deputy head of the Kurdistan Socialist Party and a member of a platform that has sought to promote the referendum in Turkey, sees the fuss over Israel’s support as “manipulation” and “hypocrisy.”

“Every country takes a position in line with its interests. This should not bother the Kurds,” Bozyel told Al-Monitor.

“Muslim Kurds need a reminder that [almost] all Muslim countries have relations with Israel today. Turkey was among the first to recognize Israel and has had military, political and strategic ties with it,” he said. “Those who raise the Israel argument in the way of Kurdish rights are not honest. This is hypocrisy. They should first look at themselves. It’s Muslim countries — Turkey and Arab countries — that keep Israel on its feet today.”

Bozyel was confident that Israel’s support “would not harm the referendum process because the Kurdish problem existed long before Israel was established.” He faulted Iraq, Turkey, Iran and Syria for failing to reconcile with their Kurdish communities for decades, dismissing the talk of a second Israel as “manipulation” to discredit the Kurdish independence bid. “This has nothing to do with Israel,” he said. “The Kurds want their freedom.”

The Iraqi Kurds’ relations with Israel have long stirred debate and controversy. Some have even alleged that the family of Massoud Barzani, the head of the Kurdistan Regional Government, is of Jewish origin, but the Kurds have given little credence to those claims.

Kurdish support for the referendum remains robust despite some divergent views. The focus on Israel is not without reason. Turkey sees the potential Kurdish state as a threat. For Turkey’s conservative government, however, convincing conservative Kurds of this threat is not easy, even though it has enjoyed solid support among them. Hence, linking the referendum to Israel is the most convenient way, which is why the pro-government media are underscoring Israel’s support in chorus. Yet, they seem to miss the fact that even Huda-Par, the most Islamist among Kurdish-dominated parties, remains unperturbed and supportive of the referendum.