Russia seems to be increasing its cooperation with the Palestinians recently in several areas, including the economy, politics and tourism. 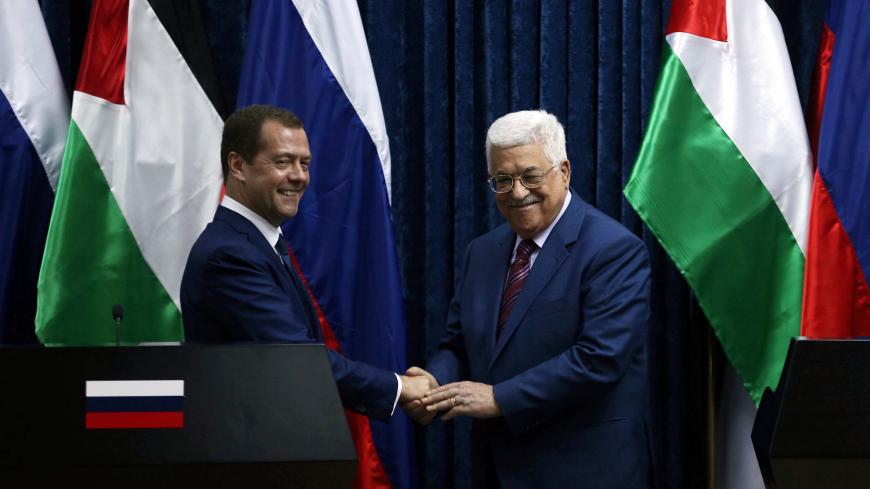 Russia appears poised to play a major role in supporting a sovereign state of Palestine and has noticeably increased economic cooperation, investment and higher-education scholarships. This was one of the conclusions a joint Russian-Palestinian committee and some 30 business executives reached during a high-level visit to Ramallah during the second week of September.

Palestinian Ambassador to Moscow Abdel Hafiz Nofal said Moscow wants to play a much more active role in the Palestinian issue. Speaking at a press conference Sept. 14 at the Palestinian Journalists Syndicate in Ramallah, Nofal said the bilateral relationship is strong.

“The solid relationship between Russia and Palestine will have a positive effect on the Palestinian cause now that [Russia] has made it clear that what happens in our area is part of its sphere of vital influence," he said.

Khaled Ghazal, a member of the Ramallah municipality who is active in Russian-Palestinian relations, told Al-Monitor Russia is interested in citrus trade, scientific cooperation and educational exchanges. “In the past, many Palestinians went to Moscow and other Russian cities through scholarships,” Ghazal said, noting these educational opportunities had slowed in recent years for economic reasons. Now, with Russia's increased interest in Palestine, such connections will increase along with joint investments, he said.

Nofal also told journalists at the press briefing that Russian President Vladimir Putin told him personally that he would like to see an increase in Russian tourism to Palestine.

The Russian Church has developed into a major Putin ally, and both support a Palestinian state. The Orthodox Russian Church has properties in Palestine, and the rejuvenated Russian Orthodox faithful have been visiting Palestinian holy places in droves. Russian pilgrims to Palestine and Israel annually amount to nearly one-quarter of all visitors. In 2014, of the 3.3 million pilgrims who visited the Holy Land, 22% (726,000) were Russian Orthodox.

Issa Hanna, an independent Palestinian Christian Orthodox researcher in Jerusalem, told Al-Monitor that Russia is offering cooperation on two parallel tracks: economic and political. “There is a lot of cooperation in the tourism field, with Palestine participating in a tourism exhibit in Moscow [in March 2017] aimed at attracting Russian Christian pilgrims to the Holy Land.”

Hanna added that Russia has offered 150 scholarships to Palestinians this year, and Russia invested $40 million to set up a Russian cultural center in Bethlehem. Hanna, who heads the Islamic Christian Council, noted that Russia has been supportive of Palestinian rights, including the right to an independent state based on the 1967 borders.

Palestinian President Mahmoud Abbas and Putin both made video conference "appearances" during the May launch of the Putin Foundation for Culture and Economics.

Abbas had met with Putin May 12 at the Sochi resort in western Russia and announced that finding a solution to the Israeli-Palestinian conflict will be “impossible” without Russia's help.

“It is impossible to solve the Palestinian issue without Russia’s meaningful participation in the peace process. That is what we have been emphasizing at all international meetings,” Abbas said during his meeting with Putin, according to the official Russian state news agency Tass.

Putin had announced that Russia “will continue to give its full support to the resumption of direct dialogue between Palestinians and Israelis."

"The peaceful coexistence of the two states — Palestine and Israel — is an indispensable condition to ensure genuine security and stability in this region,” Putin said, with Abbas standing next to him.

The Palestinian ambassador to Russia said at the same press conference in Ramallah that Abbas will meet Sept. 20 with Russian Foreign Minister Sergey Lavrov during the UN General Assembly meetings in New York.