Prime Minister Benjamin Netanyahu campaigns for the breakup of the Iran deal, ignoring the fact that a US withdrawal from the pact won’t be in Israel’s interest. 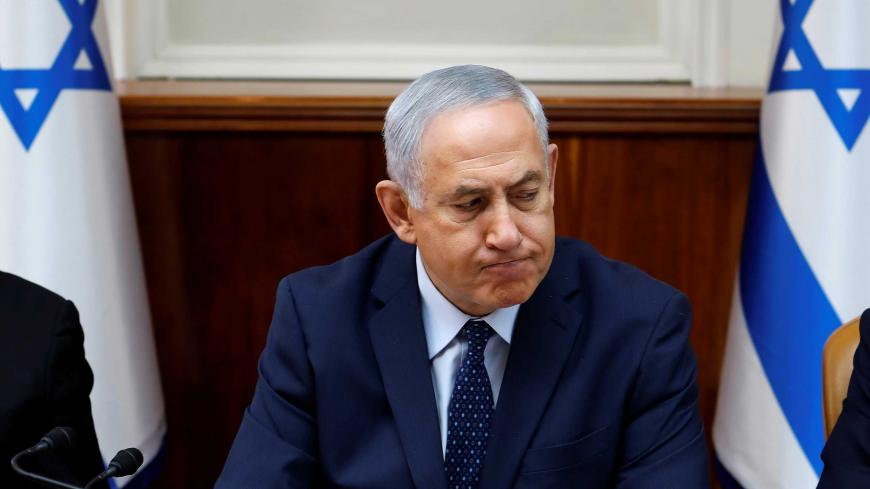 In a Sept. 20 Al-Monitor article, Mazal Mualem argued that Israeli Prime Minister Benjamin Netanyahu’s address to the UN General Assembly the day before had restored the Iranian nuclear threat to the top of the agenda. This begs one question: Whose agenda?

The agenda of the major world powers is currently dominated by North Korea and its bizarre leader, Kim Jung-un, who enjoys flaunting his country’s nuclear and ballistic capabilities and the coupling of the two. Echoes of Netanyahu’s aggressive speech against Iran were drowned out by the blustery exchange of insults between the North Korean dictator and the hotheaded president of the United States, Donald Trump.

One can safely assume that fear of an Iranian nuclear bomb has not influenced the agenda of the Israel Police investigators and the state prosecutors engaged in various probes of suspected corruption involving the prime minister and his top associates. Most important, the marked absence of the Israeli-Palestinian conflict from Netanyahu’s address did not wipe it off the agenda of the Western and Arab worlds nor off the State of Israel’s agenda, and justly so. The United States and its allies in the Middle East are still paying the price for the last time the Israelis, with Netanyahu in the lead, left their imprint on the international agenda.

In September 2002, Netanyahu warned members of the US Congress against an Iraqi nuclear threat. “There is no question whatsoever that Saddam [Hussein] is seeking, is working, is advancing towards the development of nuclear weapons,” said Netanyahu, then a private citizen testifying as an expert after his first stint as prime minister. “It is not serious to assume that this man, who 20 years ago was very close to producing an atomic bomb, spent the last 20 years sitting on his hands.”

The former and future prime minister also told the House Government Reform Committee, with characteristic self-confidence, “Every indication we have is that he is pursuing with abandon, with every ounce of effort, the establishment of weapons of mass destruction, including nuclear weapons … anyone who says otherwise is simply not objective.” Netanyahu knew that Iraqi President Saddam Hussein could produce weapons-grade material in centrifuges “the size of washing machines,” which he could conceal throughout the country.

Netanyahu’s conclusion was unambiguous: “The United States must destroy the same regime because a nuclear-armed Saddam will place the security of the entire world at risk. … And make no mistake about it — if and once Saddam has nuclear weapons, the terrorists will have nuclear weapons.”

Netanyahu was not alone. Maj. Gen. Amos Gilad, a top Defense Ministry official and former head of the research division of Military Intelligence, told reporters in spring 2003, “We know he [Saddam Hussein] is continuing to try and obtain nuclear weapons. … He probably also has biological weapons. … I assume that if and when the Americans enter Iraq, they will find things that will shake the world.”

Indeed, the world did shake. It is still doing so. People quaked in fear of the al-Qaeda terrorists who rampaged across Iraq, thousands of American mothers trembled for years, fearing for their sons and daughters fighting in Iraq and crying over their deaths. In a farewell interview with ABC Television in December 2008, President George W. Bush said there was nothing he regretted more than the intelligence failure on Iraq. “A lot of people put their reputations on the line and said the weapons of mass destruction is a reason to remove Saddam Hussein,” Bush said. To this day, Israeli public diplomacy has a hard time refuting the claim that Israel was the one that dragged the United States into the unnecessary war in Iraq.

Can Netanyahu “pat himself on the back for his success in recruiting his American colleague [Trump] for the struggle against the nuclear agreement,” as Mualem wrote? If so, would an American decision to withdraw from the agreement serve Israel’s interests?

The answer to the first question lies with an unpredictable and impulsive leader. Two-thirds of respondents in an ABC News/Washington Post poll conducted Sept. 18-21 believe Trump is doing more to divide American society than to unite it. This means that a significant number of Trump voters do not think he is serving the nation properly. Also according to the poll, 62% of Americans do not trust Trump to deal responsibly with North Korea.

Nonetheless, it is safe to assume that to stop Kim Jung-un without risking nuclear war, the United States must reach some sort of agreement with key nations. Chief among those nations are China and Russia. China has already decided to limit the export of fuel and gas products to North Korea and imports of textiles from it in response to a nuclear test Pyongyang conducted Sept. 3. In parallel, China will certainly object to reopening the nuclear agreement with Iran. The other signatories to the nuclear deal — France, Great Britain, Russia and Germany — would not be pleased with an American pullout either. Renewed US economic sanctions on Iran would actually open the Iranian market to European and other competitors.

What if Trump’s urges indeed get the better of him and his advisers, and he withdraws the United States from the agreement? Who will guarantee that Iran will not make good on its threat to close off its nuclear facilities to International Atomic Energy Agency inspectors and to do whatever it wants at those sites? True, that would ensure Iran’s place at the top of the international agenda and provide Netanyahu with flattering headlines about his speeches. The latter also depends, of course, on developments on the agenda of the Israeli Police and state prosecutors.