Iran and the United States jointly but separately are putting the screws on Massoud Barzani to halt his drive for Iraqi Kurdistan to hold its upcoming independence referendum. 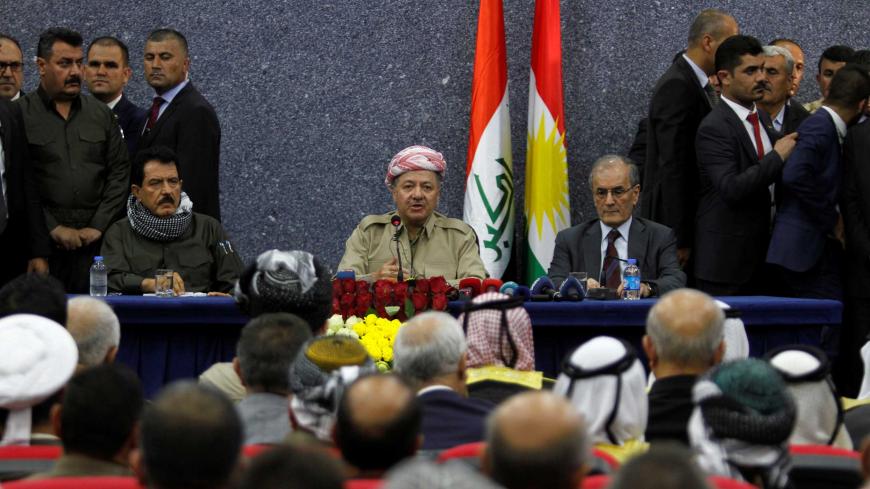 Mlitary commanders and diplomats from both Iran and the United States are swarming Iraqi Kurdistan in a last-ditch attempt to convince the Kurds, an important ally in the war against the Islamic State (IS), to either postpone the planned Sept. 25 referendum for independence or cancel it all together.

Maj. Gen. Qasem Soleimani, the commander of Iran’s powerful Quds Force, and Brett McGurk, the US special anti-IS envoy accompanied by US Ambassador Douglas Silliman, were shuttling this week between Baghdad, Erbil and Sulaimaniyah to convince all sides to come to an agreement.

"Both the Iranians and the Americans were in agreement about the referendum and reiterated that it should not take place," a source briefed about the Patriotic Union of Kurdistan’s (PUK) separate meetings with American and Iranian officials on Sept. 11 told Al-Monitor.

Both Iran and the United States also separately conveyed similar messages to Gorran movement officials. The latter believe that the referendum should be postponed until regional and international support is secured. "We will not support you, and you will be on your own," a Gorran official told Al-Monitor when recounting a meeting with the American ambassador. Indeed, “The United States is 100% opposed to the referendum on September 25,” Weshyar Omar, who was part of the Gorran delegation meeting with the Americans on Sept. 13, quoted McGurk as saying.

"Until now, we have held back the [Hashid Shaabi, or Popular Mobilization Units (PMU)] from attacking, but I will not bother to do that anymore," Soleimani warned the senior PUK officials, the source briefed on the meeting told Al-Monitor. "Just look at Mandali and what happened there. That is the beginning," he cautioned, referring to the Sept. 11 incident in which a group of over a hundred Iranian-backed Iraqi militia fighters arrived in the disputed subdistrict of Mandali in Diyala province, 100 kilometers (62 miles) northeast of Baghdad, and forced the Kurdish head of the town’s council out of his job and announced that the town will not be included in the Kurdistan referendum. The incident came three days after Hadi Ameri, the head of the Badr Brigade — an important component of the PMU — warned that Iraq will stay united and if the Kurdistan referendum went ahead it could create a civil war in the country. In a direct challenge to the Kurds, on Sept. 12 and 13 respectively, Diyala and Salahuddin provincial councils canceled the plans to hold the referendum in disputed areas within their provincial boundaries.

Meanwhile, the de facto president of the Kurdistan region and the man behind the referendum push, Massoud Barzani, said on Sept. 13 in a speech in the city of Akre near Erbil that no alternatives have been presented for the Kurdistan Regional Government (KRG) to reconsider its decision to hold the referendum later this month. “We want to extend the hand of brotherhood to all sides, but if any side wants to fight us, they can try it,” Barzani warned while standing underneath a sign that read “Yes to the State of Kurdistan, 25/9/2017.”

While both Iran and the United States object to the referendum, their reasoning appears to be different. Washington is worried that the plebiscite will weaken the position of Prime Minister Haider al-Abadi ahead of the April 2018 general elections. The logic of the United States is that any loss for Abadi will be a gain for Iran and its supporters — including the PMU. Tehran, on the other hand, is worried that the referendum is an American and Israeli ploy to create further instability in the region and endanger Iran’s security by influencing its 8-million strong Kurdish population.

The logic of the United States is that any loss for Abadi will be a gain for Iran and its supporters.

Given how much Barzani and his Kurdistan Democratic Party (KDP) have invested in the referendum, it appears that the only option available to the United States and Iran to convince the Kurdish president to postpone the plebiscite while saving face is through an internal Kurdish agreement. McGurk hinted at this during his meeting with the Gorran officials, saying that the referendum should be postponed through the KRG parliament. He coated his warning, according to Weshyar Omar, who attended the meeting, by reassuring the Kurds that with help from France and Britain, Washington would give guarantees to the Kurds to resolve all the outstanding issues with Baghdad if they were to postpone the referendum. McGurk’s pressure bore fruit when he managed to convince the PUK and the KDP to postpone the first session of the Kurdish parliament from Sept. 14 to the following day to allow Gorran sufficient time to discuss the issue at its General Council meeting, which took place on the evening of Sept. 13, according to a senior Gorran official who attended the gathering.

McGurk is said to be pushing for an agreement among the Kurdish parties, who in turn will officially request through the Kurdish parliament that Barzani postpone the vote to another time after Iraqi's elections in April 2018. Barzani will then concede to postponing the plebiscite on the basis that it is the wish of the representatives of the Kurdish people. Tehran and Washington will get their way, and Barzani will be able to back down while saving face.

Indeed, on Sept. 14 the website of the Kurdish presidency announced that the United States, the UK and the United Nations had presented an alternative to holding the Sept. 25 plebiscite on the same day to Barzani, and that Barzani had responded that he will consult with the political leadership in Kurdistan and respond shortly.

If Gorran does not reach an agreement with other Kurdish parties, the PUK, KDP and their partners could technically resume the work of the Kurdish parliament as they hold the majority of seats — 81 out of 111 — and still hold the referendum. This option will be catastrophic for the Kurdistan region, according to another Gorran official who attended the meeting with McGurk.

It is not clear what the Kurds will come to agree on in the days leading up to Sept. 25. But if history is anything to go by, the stubbornness of the Kurdish leadership could create yet another headache for the Kurdish people — and Washington.

Indeed, the words of a prominent American diplomat made persona non grata by Saddam Hussein’s regime over his persistent contacts with the Kurds may prove to be particularly relevant these days. “The Kurds themselves are so incredibly badly split … [that] if you were to hand them their independence tomorrow, they would be unable to sustain it. This virtually happened, as you know, after the Gulf War [1991] when we took over Iraqi Kurdistan and essentially said to the Iraqi Kurds, ‘Here you are. Please set up the state.’ Of course, we didn't say those words and we would never admit to such a thing, but that's effectively what happened," lamented Haywood Rankin in a 1998 interview. "The individual Kurdish leaders have all been incapable of compromise. That has been the story for years and years and years," Rankin concluded.