Egypt has nominated "Sheikh Jackson," a film that portrays the torments of a cleric upon learning that his childhood hero is dead, for the 2018 Academy Award for best foreign language film. 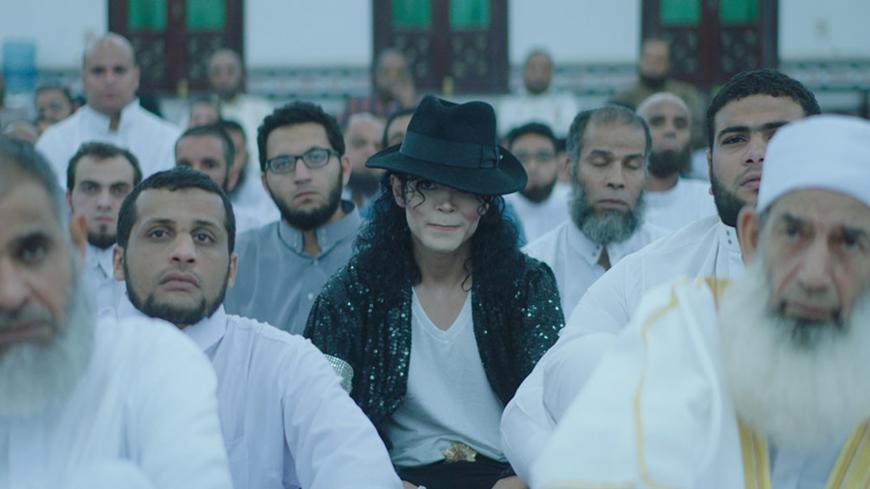 A scene from "Sheikh Jackson," Egypt's 2018 Oscar nominee for best foreign language film, is seen in a trailer for the movie. - TIFF Trailers

In the Red Sea resort of El Gouna, some 12 miles north of Hurghada, Egyptian and foreign filmmakers are attending the first edition of El Gouna Film Festival, which kicked off on Sept. 22 and will run for a week.

The film revolves around Sheikh Khaled, a cleric who lives an austere life with few pleasures. Sporting a long beard and dressed in a galabiya, a traditional long garment, he is so obsessed with death and the afterlife that he sleeps under his bed to remind himself of the inevitability of death. He also expects his family to lead a conservative life, aggressively telling his wife to wear the hijab and scolding his young daughter when he catches her watching a Beyoncé video on the internet. In one of the memorable scenes, he lectures his daughter about the singer, referring to her songs and her performances as “dirty dancing” and “Satanic music.”

But for all his conservatism, Sheikh Khaled has a weak spot, which is revealed when he learns pop legend Michael Jackson is dead. Then we get a glimpse of the once rebellious Khaled as a teenager in the early 1990s. Khaled, a big fan of Jackson, strives to imitate him — in hairstyle and by moonwalking — which earns him his nickname "Jackson" from his friends and the anger of his father, who thinks his son is effeminate.

In a touching scene, Khaled’s mother whispers to him, "Jackson is the world's best singer. But keep that as our little secret." He also recalls the beating he received from his father for “being Jackson” shortly after his mother dies.

Speaking a few days before the El Gouna Film Festival, director and co-writer Amr Salama told Al Monitor, “The film is not tackling the Islamists or a certain category of people. The film is about humanity; it shows how one's identity is changeable.”

He said that in Egypt, identity crises are very common, especially among the young generation.

Salama, now in his 30s, said he had been a huge Michael Jackson fan like Khaled when he was a teenager. But in the late 1990s and early 2000s, like most Egyptians at the time, he became more religious for a while.

“It is a film about those who are on a path of self-discovery. It is a work about accepting who we are despite inner contradictions,” Salama said.

"Sheikh Jackson" stars Ahmed Malek, who plays the younger Khaled, and Ahmed El-Fishawi, who plays him at an older age, in addition to Maged El Kedwany (Khaled’s father) and actress Basma Hassan, who plays the role of a therapist who tries to help Khaled resolve his inner conflict.

"Sheikh Jackson" had its world premiere at the 2017 Toronto International Film Festival on Sept. 15, in the special presentations section.

The film was picked as the Egyptian entry for the best foreign language film for the 90th Academy Awards. The shortlist will be announced on Jan. 23.

“I’m thrilled and honored to be recognized,” Salama said in a statement. "My aim was to be honest from the beginning and I wanted to cross borders with this film and subject. I believe we have done just that."

"Sheikh Jackson" will also be screened at the 61st BFI London Film Festival, which will kick off on Oct. 4. The film will be screened in Egyptian cinemas in October.

“Why Michael Jackson? Because he was an icon for the 1980s generation. Most of the young people at that time loved to listen to his songs. His sudden death was a shock for his fans, who liked not only his songs but his shows. He was a legend. I congratulate the director for this successful film,” critic Magda Adel Khiralla wrote on Facebook after its screening at El Gouna Film Festival.

The film festival was founded by Egyptian billionaire Naguib Sawiris, whose brother Samih built El Gouna resort in the late 1980s.The theme of El Gouna Film Festival is “Cinema for Humanity.” Sawiris said at a press conference in Cairo in May that the theme was selected with the aim of using cinema to uphold human values.

He believes El Gouna Film Festival will attract many international filmmakers to Egypt and pave the way for the country to become a leader in world cinema. American actor Forest Whitaker, Egyptian actor Adel Imam and Lebanese film critic Ibrahim Al-Aris will be given lifetime achievement awards during the festival's closing ceremony Sept. 29.