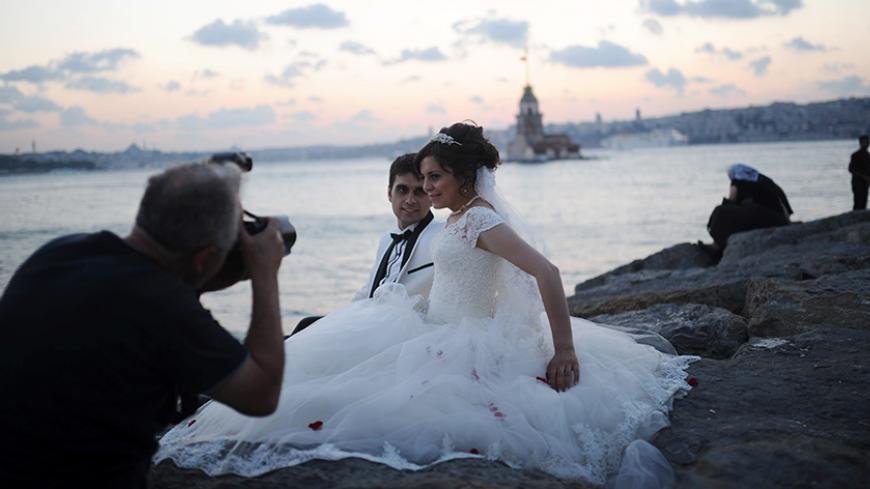 DIYARBAKIR, Turkey — “I feel as if we are inching toward Sharia,” a young woman from the southeastern city of Diyarbakir told Al-Monitor, asking her name be withheld. She was concerned by a new bill in the Turkish parliament that would empower state-registered muftis to perform civil marriages.

The bill, submitted to parliament July 25, caused a major controversy over secularism, underage marriage and the motivations of the government in giving new powers to muftis. Muftis are Sunni civil servants who work under the umbrella of Turkish Directorate of Religious Affairs (Diyanet) and do not presently have the right to perform civil marriages. They can, however, perform a religious marriage if requested by the couple, though religious marriage is not recognized by the Turkish state and gives no rights to the spouses.

Currently, municipality officials, ship captains and mukhtars (the elected leaders of villages) have the authority to conduct civil marriages. Religious leaders — muftis, priests or rabbis — do not. Under the new proposal, when it comes to the representatives of religious faiths in Turkey, only state-registered muftis would be allowed to perform such marriages.

The Justice and Development Party (AKP) government maintains that the new arrangements will facilitate civil marriages. Critics say that granting the right to conduct marriages to the clerics of a certain group is against secularism and the practice itself will increase religious marriages and marriages involving minors. Women’s groups express concern that the muftis would be more likely to turn a blind eye to an underage bride than registry officials.

In the nationwide debate, the most outspoken groups opposing the new law come from Diyarbakir, where the bar association and women's associations have been fighting long and hard against child marriage and child abuse. Despite their efforts, however, sexual abuse of underage girls, incest and forced marriages with minors, including taking young girls as second and third wives, remain common in the region. Turkey's Human Rights Association has documented 110 cases of child abuse under Article 103 of Turkish Penal Code, which addresses the sexual abuse of minors, in eastern and southeastern Turkey in 2016 and 82 cases in the first six months of 2017. The Diyarbakir Bar Association, quoting the Justice Ministry’s own numbers, said 17,000 child abuse complaints were filed in 2015 across Turkey.

For Asli Pasinli, the chair of the Diyarbakir Bar Association’s Women’s Rights Center, the bill will strip women of many of the rights they have acquired over the years through the constitutional principles of secularism and the civil code's equality provisions. Pasinli told Al-Monitor that although the law was presented as a way to facilitate civil marriage, she thinks the motivations are entirely different. “This proposal, if adopted, will facilitate religious marriage as well as open the way for underage marriages. The muftis are religious authorities. Giving them the right to conduct a civil ceremony will increase their role and influence in the civil life.”

Pasinli also pointed said that under the proposed law, babies who are not born in a hospital could be registered by a declaration from parents at the registry office. Pasinli said that this practice would make it more difficult to protect children. “Often," she said, "we learn of child abuse cases or underage marriage when the child gets pregnant and is taken to hospital to give birth. The doctors in the hospital report the situation when they see an underaged mother and we step in and bring the abuser before the court.”

She added that because the proposal would allow newborns to be registered with a simple declaration, families could force underage brides or abused children to give birth at home to avoid prosecution. It “will put the lives of underage mothers and their children at risk during childbirth, as they would be deprived of medical care,” she said.

For Zahit Ciftkuran, who has been a mufti in the southeast for years, what is important is not who conducts the ceremony but whether the law provides any loopholes for underage marriage. He called for careful scrutiny of the draft. AKP ministers fervently deny that the law would change anything aside from facilitating civil ceremonies for all Turks, as the marriage procedures and requirements, including age limits, will remain untouched.

But for some, allowing a religious official to conduct a civil ceremony represents a radical change. Dilek Akin, 25 and recently married, thinks that the muftis’ role should remain strictly religious and not wield authority over civil matters. “This law gives the mufti the right to interfere in our life or to exert influence on how or whom we marry,” she said.

Another Diyarbakir resident, Sefer Yegul, thinks that the proposal is shameful. “All those years, the religious officials conducted religious weddings between grown men and underage girls. Now, the law gives them the authority to do the same thing in civil marriages,” he said.

Supporters of the law say that such concerns are baseless. Omer Evsen, the desk officer of Diyanet-Sen, the labor union for Diyanet employees, told Al-Monitor, “The new law will remove many difficulties from the civil ceremony. It will mean that 1,038 muftis around the country will be able to conduct weddings in addition to the municipality officials authorized at present. We think that this is an important step as it will make civil ceremonies more accessible and faster. In Turkey, there are many people who live together without marriage or with a religious marriage [considered invalid under Turkish law]. This creates major problems socially and legally.”

Echoing government officials who made similar remarks, Evsen said that giving the state-employed muftis the right to perform marriages would prevent religious weddings without civil validity as well as polygamous marriages.

According to Evsen, the number of people who would turn to the muftis to perform their marriages would not be large. “There are more than 600,000 civil marriages in Turkey every year,” he said. “I would calculate that only 35,000 to 40,000 of these will be conducted by the muftis. The muftis will be requesting the same documents as the registry officers, so it is unthinkable that a mufti will perform civil marriages in a different way from the other officials,” he said. “There can be no abuses.”