Sentiment against Palestinians is taking hold in Iraq, where some are being accused of supporting the Islamic State's extreme ideology. 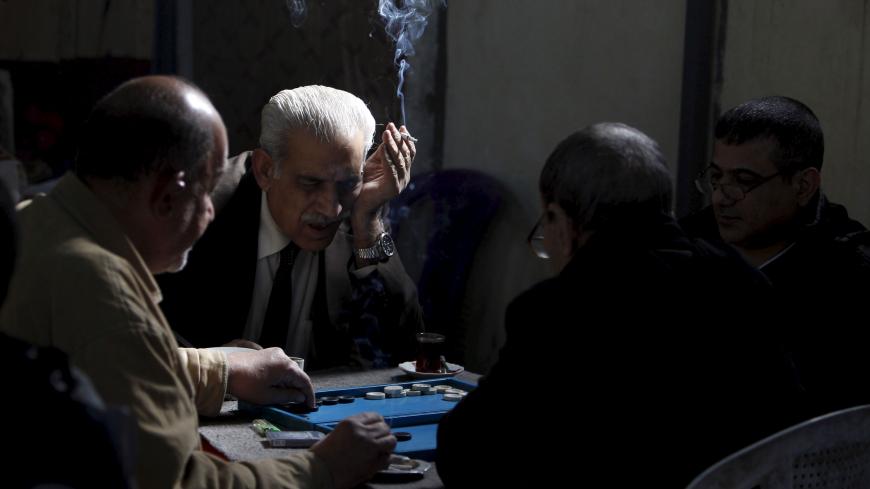 Palestinians play a game of backgammon at a cafe in the Baladiyat neighborhood of Baghdad, Iraq, Jan. 30, 2016. - REUTERS/Khalid al Mousily

BAGHDAD — Palestinians living in Iraq have expressed fears of reprisals against them by Iraqis, as old accusations are being revived that Palestinians have joined the Islamic State (IS) and are carrying out suicide attacks.

Indeed, a number of Iraqi social media activists attacked Palestinians while showing support for Israel, prompting Palestinians in Iraq to call on their ambassador in Baghdad on Aug. 2 to intervene against the campaign of incitement. In one example, an Israeli Facebook page called “Stand With Us — In Arabic” posted a video July 29 of a young Iraqi woman criticizing Palestinians and defending Israel.

When Palestinian Foreign Minister Riyad Malki visited his Iraqi counterpart, Ibrahim al-Jaafari, on Aug. 24, he did not bring up the issue of Palestinians being attacked in Iraq, which raised strong criticism among Iraqi Palestinians.

Mobilization against Palestinians is not new. After Saddam Hussein was overthrown following the US invasion of Iraq in 2003, Palestinians faced accusations that they had been his loyal supporters and that he had endowed them with privileges and high standing. These accusations are resurfacing today.

IS, which recruited fighters of various nationalities, attracted some Palestinians. On March 1, a new report issued by the International Center for Counter-Terrorism - The Hague said such IS members, including nine suicide bombers from the Palestinian territories, carried out attacks between December 2015 and October 2016.

This information intensified the rancor felt over earlier accounts. Reports circulated in May 2015 about dozens of Arab citizens in Israel supporting IS and joining its ranks, including some such citizens who were killed in battles in Syria and Iraq.

In 2013, Maj. Gen. Fadhil Barwari, the commander of the Iraqi special operations forces, said that out of the more than 4,000 Arab suicide bombers known to have carried out terrorist attacks in Iraq since 2003, 1,201 bombers were Palestinian and Jordanian nationals. This further increased Iraqis’ resentment against Palestinians to the point that some Iraqis called for the Palestinians' deportation.

On July 29, Iraqi teacher Abbas Musa al-Kanani wrote in an article published by media outlets, “The Palestinian terrorists in Iraq have distorted Islam and their Palestinian cause, after they blew themselves up in the markets in the middle of innocent people.”

However, Iraqi writer and media figure Abdul Rahman al-Majidi slammed the campaign against Palestinians. In an interview with Al-Monitor, Majidi said, “This is an exaggerated [reaction]. The proponents of Israel [in the Iraqi campaign against Palestinians] have suspicious motives. This is evidenced by the Facebook page called Iraq & Israel," which he said was founded by such Iraqis. “Many Iraqi intellectuals are rushing into hasty reactions; this was the case during the crisis of the closure of Al-Aqsa Mosque, when Iraqi intellectuals showed support to Israel.”

Another writer, Ahmed Al-Mallah, said in an article that “Israel tried to attract Iraqi ethnic minorities who have been subjected to IS’ terror and exploit their suffering to promote the idea that Jews are subjected to terrorism.”

Iraqi parliament member Mohammed al-Khalidi told Al-Monitor, “Palestinians in Iraq are being attacked with the purpose of pushing them to leave. One of the most prominent reasons is sectarianism, since Shiites see Palestinians as Sunnis who support extremism. They want to drive them out of the country to take over their properties and real estate through armed groups.” He said that many of the threats are being made secretly and that it is difficult for them to be tracked by security authorities.

Muhammad al-Zaytaw is a Palestinian who resides in Iraq. He told Al-Monitor, “I have been personally called a supporter of IS and Saddam's regime by more than one Iraqi national. We demanded that the Palestinian Embassy in Baghdad improve our situation, but to no avail.”

Al-Monitor contacted the Palestinian Embassy, which declined to comment.

Jawad al-Shammari, the media director at the Office of the Iraqi High Commission for Human Rights in Baghdad, also believes sectarianism is largely behind the problem. He told Al-Monitor, “Some Iraqi groups are persecuting Palestinians in particular, since they believe they are part of an Arab agenda hostile to Iraq for sectarian reasons.”

For Shammari, the solution is “to raise awareness about human rights in Iraq, disseminate a culture of tolerance and form positions based on facts.”

Iraqi Interior Ministry spokesman Brig. Gen. Saad Maan told Al-Monitor by phone, “The ministry will follow up on any attempted attack against any individual in Iraq and will make sure Palestinians in Iraq, who account for about 13,000 people, will receive the same legal treatment as all Iraqis.”

Some sources warned against generalization, noting that accusing all members of the Palestinian community in Iraq of being loyal to Hussein or saying they support IS is a retaliatory behavior that threatens security and encourages a negative image of human rights in Iraq.

To control the situation, the sources said, media outlets must be very cautious about spreading false allegations and inaccurate statistics, which could lead to more acts of revenge and paint Palestinians in a negative light that doesn't represent the vast majority of them.