Al Jazeera gains from Israel’s attempts to close it

Israeli Prime Minister Benjamin Netanyahu has warned that Al Jazeera's Jerusalem office will be closed, but this is unlikely to affect the network's work or coverage of the Palestinian-Israeli situation. 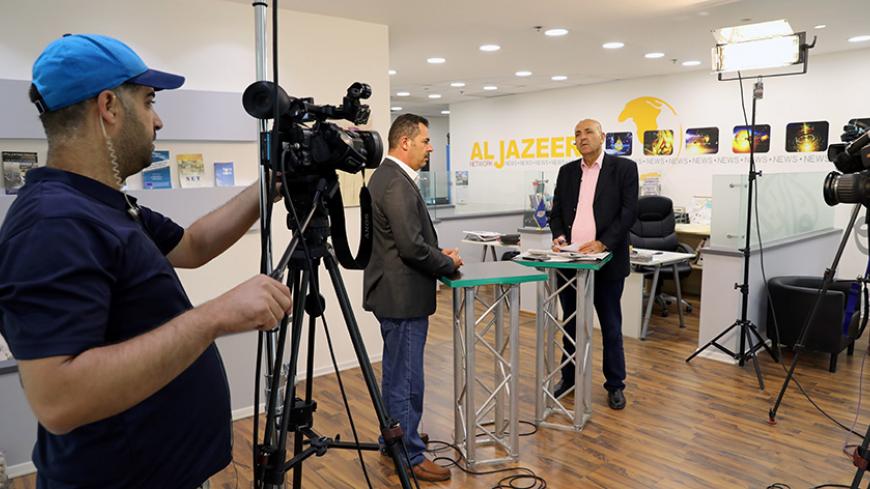 Employees work inside the office of the Qatar-based Al Jazeera network in Jerusalem, Aug. 7, 2017. - REUTERS/Ammar Awad

Despite Israel’s public statements about closing down Al Jazeera’s offices in Jerusalem, it appears that the execution of such a decision will require a great deal of legal work on the part of the Israeli government. The decision, if implemented, will do little to reduce the coverage by the most-watched Arab satellite TV station.

The move seems particularly odd since it would not be favorable to Israeli officials, who used to provide some kind of balance to Al Jazeera’s stories, which allowed them to speak unfiltered in its reports.

In addition to its Jerusalem office, Al Jazeera has a large office in Ramallah and a major bureau in the Gaza Strip. Both of these Palestine-located offices will not be directly affected by the Israeli decision should it be approved.

While most Israelis receive Al Jazeera as part of their cable TV channels, the situation for Palestinians is different. Palestinians watch Al Jazeera through satellite dishes that are completely unregulated and unrestricted.

The Israeli decision regarding Al Jazeera has been clearly a political one that has little to do with so-called incitement.

Israel had welcomed Al Jazeera since its launch in 1996 and has benefited from its presence by providing its millions of viewers with various Israeli spokespersons as well as senior politicians. Banning the media network and revoking the press credentials of its journalists will hurt Israel more than it would hurt the Qatari-based media giant.

At a time when Israel’s two embassies in the Arab world — Cairo and Amman — are closed, the decision by its political leadership to “punish” Al Jazeera and to be seen as supportive of Saudi Arabia, the United Arab Emirates (UAE), Bahrain and Egypt seems clearly to be counterproductive.

Walid Omary, the bureau chief of Al Jazeera’s Jerusalem office, penned an opinion piece in the Israeli daily Haaretz Aug. 1, calling the Israeli action an attempt “to kill the messenger” and accused Israel of “colluding” with Arab dictators. “The collusion by [Israeli Prime Minister Benjamin] Netanyahu with his Arab autocratic neighbors leaves little doubt that free independent media and truth are ready to be sacrificed as collateral damage in the power politics of the region,” he wrote.

Saudi Arabia and Jordan both have closed the local offices of Al Jazeera when the Gulf crisis erupted.

Opponents of Qatar — Saudi Arabia, UAE, Bahrain and Egypt — have made the closure of Al Jazeera one of their 13 conditions issued June 23 to resolve the dispute with Qatar and end their blockade on the small Gulf country.

Barbara Trionfi, the executive director of the Vienna-based International Press Institute, told Al-Monitor that Israel’s efforts to prevent the network from broadcasting would affect the people’s right to access what has become a very important and respected source of news and information.

"If Israel’s representatives believe — as some have stated — that opinions disseminated by Al Jazeera amount to incitement and are therefore in violation of Israel’s law and international standards in this area, they should bring their claims in front of an independent court and allow the country’s justice system to address allegedly problematic content in line with Israel’s legal standards,” Trionfi said.

In a statement issued by Al Jazeera, the Israeli incitement accusations were rebutted head on. “During the press conference, the [Israeli communication] minister could not substantiate his comments by referring to a single news bulletin or situation that proved Al Jazeera had not been professional or objective during its coverage in Jerusalem,” said the statement issued Aug. 7 in Doha.

Despite its public denouncements, Al Jazeera and its defenders do not appear to be fazed by the Israeli decision. For years, opponents of Al Jazeera have criticized the Gulf-based media network precisely for having an Israeli bureau.

Israel’s attempt to close that bureau is a win-win situation. Al Jazeera could complain that it is being barred from doing its professional work by not being able to cover the Israeli point of view, while at the same time, it would be less attacked and accused of being an Israeli appeaser and a normalizer.

Omary, the network’s longest-serving bureau chief, dealt with this issue in his Haaretz opinion piece, writing, “Arabs have criticized Al Jazeera of being pro-Israeli and Israelis have criticized us for being pro-Arab. We have been accused of being Islamist in the West and of being pro-West among Islamists. Governments have said we’re pro-rebel and rebels say that we’re pro-government. In fact, all we’ve done is the right journalistic thing — to bring all points of view to the table and let our audiences decide for themselves."

As a matter of fact, with the 21st-century technologies, a media network can continue to operate without an office or the accreditation of its staff. A reporter with a smartphone or a laptop can do almost the same TV reporting in order to continue to keep viewers up to date on what is going on in the world.

Israel’s attempt to muzzle the Qatari-based Al Jazeera is unlikely to affect its work or coverage of the Palestinian-Israeli situation.

Like similar previous decisions, the action against Al Jazeera appears to reflect more internal Israeli issues. This is not to mention Netanyahu’s erratic behavior due to his troubles with the police. The decision to shut down Al Jazeera appears to be an attempt to repair the damage of his image caused by the Al-Aqsa crisis.

As for Al Jazeera’s coverage of the Palestinian conflict, this Israeli step is unlikely to make any difference to this effect.