Why did tribes take up arms in Egypt's Sinai?

Sheikh Issa al-Kharafin, the sheikh of the Rumailat tribe and the head of the North Sinai Sheikhdom, speaks to Al-Monitor about the pros and cons of the tribal decision to take up arms to help the army fight extremists. 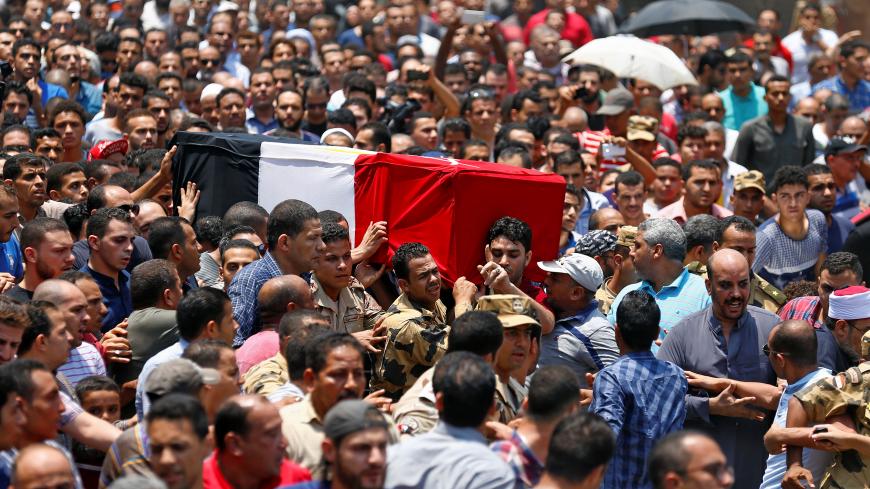 Egyptian relatives and friends carry the coffin of army officer Khaled al-Maghrabi, who was killed during a suicide bomb attack on an army checkpoint in Sinai, during his funeral in Toukh, al-Qalyubia province, north of Cairo, Egypt, July 8, 2017. - REUTERS/Mohamed Abd El Ghany

CAIRO — The battle between the Egyptian army and extremist groups is ongoing in northern Sinai. The confrontation only intensified in July 2013, after the ouster of President Mohammed Morsi, when extremist groups exploited the chaos of that time and further organized and spread throughout Sinai.

The province of North Sinai witnessed a fierce battle between extremists and the Egyptian army in Rafah in August 2013, which resulted in the deaths of 25 Egyptian soldiers. These escalating confrontations over the years led the Sinai tribes to officially announce in April that they were taking up arms against extremist groups and cooperating with the army against these groups.

Al-Monitor interviewed Sheikh Issa al-Kharafin of the Rumailat tribe over the phone to ask him about the developments of the battle between the army and the extremists after the Sinai tribes decided to officially join the battle. Kharafin, who is head of the North Sinai Sheikhdom and is based in Ismailia, talked about the pros and cons of such a decision and whether the calls made by several public figures for the relocation of Sinai residents would serve the army.

Al-Monitor:  Fighting between the Egyptian army and extremist groups in Sinai has been ongoing for more than five years. The latest attack [by extremists] led to the deaths of four policemen Aug. 9. What is your take on the current confrontation? Where are things headed?

Kharafin:  The battle between the army and extremist groups has been ongoing for a while now, but there has been a remarkable improvement in the security situation, and the battle will end in favor of the army, especially considering that the tribes have joined the armed confrontation against these groups in cooperation with the Egyptian army. This security improvement has affected the movement of extremists in the Sinai, knowing that they previously moved around in front of the very eyes of Sinai residents. This improvement was made possible through a very severe fight [against extremists] and a decreasing number of extremist groups. These groups previously attracted Sinai young people through religion, but as soon as their true faces were shown through brutal crimes against tribes and the killing of civilians, the tribal young people rejected them and even helped fight against them in cooperation with the army.

Al-Monitor:  The Sinai tribes announced April 29 that they would take up arms to fight the Islamic State (IS). How did that affect the situation in Sinai?

Kharafin:  This announcement could help the army settle the battle at an early stage, because tribesmen know very well the Sinai's complex geography and are aware of the extremists’ hideouts. Add to this that we do not need weapons training [since Sinai residents have long been defending themselves with arms in the desert]. Once the battle between the army and the extremists is over, the tribes will hand over their weapons to the state.

Al-Monitor:  What losses have the Sinai tribes incurred in their battle against IS? What gains have they reaped?

Kharafin:  Battles always entail losses and gains. The tribes have lost many of their sons in that battle. But in exchange for those losses, they managed to kill a number of extremists who had committed crimes against them, and the most important gain is that tribes are helping the army end the battle against jihadi groups.

Al-Monitor:  What are the guarantees provided by the army to the tribes to ensure their cooperation and to protect the lives of their members from the threat of jihadi groups?

Kharafin:  The tribes did not ask the army for any guarantees because the confrontation that the tribes chose to join is in their own interest given their desire to put an end to the battle against extremists. But the army gives advice to tribal sheikhs receiving threats. For instance, the army has been following my movements since I survived an assassination attempt [in 2013]. It always follows my movements and warns me in case of danger. Also, the state protects tribes cooperating with the army.

Al-Monitor:  Why has the Sinai turned into a land breeding extremism?

Kharafin:  The lack of education and the spread of ignorance are the main reasons behind the spread of these extremist groups. Members of these groups were newcomers in the Sinai. They spread by using religious slogans to persuade the Sinai people to join them, and they managed to do so by exploiting the spread of illiteracy in the peninsula. But the equation changed as these groups used violence against the army and the police to achieve their goals of controlling the Sinai. Also, they exploited the era of former President Mohammed Morsi and further spread in Sinai by organizing themselves. Following the ouster of Morsi, they violently targeted the army, which prevented them from achieving their goal of declaring the Sinai as an Islamic emirate.

Al-Monitor:  What is your take on the calls launched by some individuals, such as parliamentarian Hamdi Bakhit, to relocate Sinai residents for a year so the armed forces can settle the dispute with jihadis?

Kharafin:  In the beginning, the army did not ask anyone to leave, as this would not be in the army’s interest. After all, Sinai residents serve as the eyes of the armed forces given their experience in places used by extremists as hideouts. If Sinai residents are uprooted, then extremists would exploit that demographic vacuum and deploy in places that are difficult for the armed forces to reach.

Al-Monitor:  Do you think the curfew that has been in place since August 2013 by the armed forces in northern Sinai impedes development?

Kharafin:  This decision serves no useful purpose because Sinai citizens do not go out at night given the situation. If they move around at night, the army would think they are extremists and shoot them. And if they escape the army, they would be threatened by extremists. Terrorism is the main obstacle to development in the Sinai.

Kharafin:  The Sinai parliamentarians are in trouble because they are unable to offer any services to the people of Sinai due to the disturbances and armed confrontations between the extremists and the army. It is difficult for them to perform their duty as I did in the past because the situation in Sinai is tumultuous and the crises suffered by the Sinai people have increased in light of the battle waged by the army and the tribes against extremists.

Al-Monitor:  What development projects does the Sinai need?

Kharafin:  The project that would most quickly benefit the people of Sinai is to complete the el-Salam Canal project [to use the waters of the Nile River to provide irrigation for Sinai agriculture]. Also, five acres of agricultural land should be given to every Sinai resident so they can feel more stable.

Al-Monitor:  Away from the armed conflict between the state and the jihadi groups, is there a role for the state in combating cultural and social extremism in the Sinai?

Kharafin:  Had Sinai residents been educated, extremist groups would not have been able to deploy in the peninsula. The state has to establish more schools and universities to spread education. This is the biggest weapon to confront terrorism. There are religious convoys sent by Al-Azhar and the Ministry of Awqaf to confront extremism, but we need more convoys to spread religious awareness in the Sinai.