Though Turkey's various crises continue to bubble, the recent news wasn't all bad. 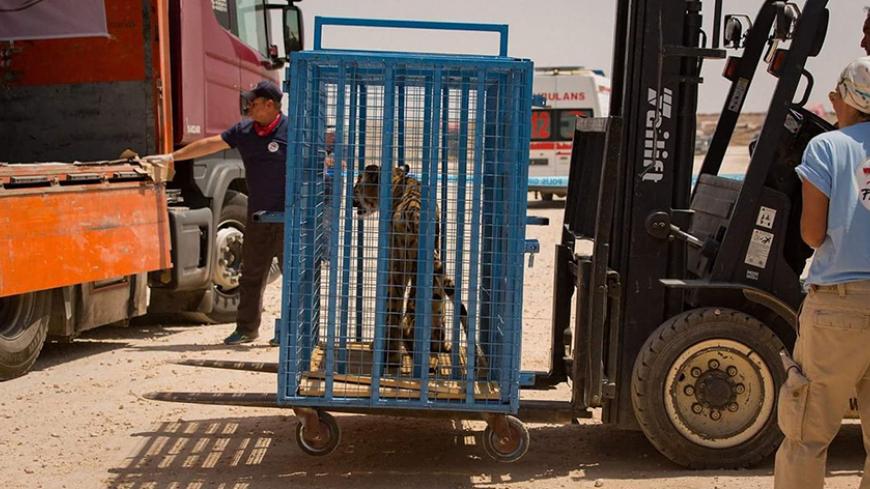 A tiger from Aleppo's zoo is transported to a safe place in Turkey for medical treatment and a new home in this photo shared on Twitter, July 21, 2017. - Four Paws International

Good news is hard to come by in Turkey these days. From further arrests of journalists to endless diplomatic spats, things seem to be going from bad to worse. But that's not to say there isn’t any. An attentive reader can unearth some happy stories. Take today’s news, for instance:

The pro-government daily Yeni Akit reported that a pair of creative surgeons at a state-run hospital in the central Anatolian city of Nevsehir treated burn injuries on a four-year-old boy’s foot by grafting foreskin from a circumcised penis onto the affected area. The patient has been discharged and is recovering.

Another pro-government title, Daily Sabah, ran heartwarming news about how Turkish authorities are helping to evacuate stranded zoo animals from war-ravaged Aleppo. Turkey’s Forestry and Water Affairs Ministry teamed up with Austrian charity Four Paws to rescue three lions, two tigers, two bears and two hyenas from the Magic World zoo. The starving creatures were brought to a shelter in Bursa, western Turkey, where they will be treated for trauma and injuries they sustained during the violence. Two more lions and a pair of wild dogs will be brought in later this month. Forestry Minister Veysel Eroglu called the animals “a shared heritage of the international community.”

The mass-circulation Hurriyet shared an announcement from the Istanbul Metro Authority about tackling the global commuter plague of "manspreading." Following the example of Madrid, Istanbul will take action to deter tube passengers from sprawling their legs. Measures to deter such violations of other passengers' personal space will include signage depicting offenders with a big red X.

The state-run news agency Anadolu, which provoked the ire of the United States last week by leaking the whereabouts of US special operations forces in northern Syria, reported on an unexpected bonus from last week’s earthquake in the Aegean resort of Bodrum.

The 6.5 magnitude trembler, which killed a Turk and a Swede in the nearby Greek island of Kos and injured more than 360 people, also triggered what Anadolu called “a miracle of nature.” A dry stream in Bodrum’s Derekoy neighborhood began flowing again. Bodrum resident Ferah Sevran marveled, “This is a mystery delivered to us by Allah. Thanks to the water from this stream, the wells have filled up. We are astonished and happy.”

Definitely good news: A court in the Black Sea province of Giresun sentenced a Quran instructor to a tidy 217 years, four months and six days for sexually abusing students ages 9-13 enrolled at his seminary.

An administrative court ruled in favor of an Alevi house of worship known as a cemevi in Istanbul’s Esenyurt suburb. Citing previous rulings by the European Court of Human Rights, the presiding judges said Turkey’s state-run Religious Affairs Directorate, or Diyanet, should pay its electricity bill. The Alevis and other non-Muslim minority groups have long complained of discrimination at the hands of Diyanet. The body covers utility bills for Sunni mosques but refuses to do so for cemevis and the smattering of churches and synagogues that survive in the country.

And finally, the Turkish Economy Ministry announced that Turkey had drawn in a total $4.8 billion in foreign direct investment between January and May. This figure represents an increase of 11.2% compared to the same period in 2016, with much of the funding coming from European Union member states.