Ankara-Berlin animosity is likely to spill over from harsh words to action as Germans languish in Turkish detention and German investors are warned away from the country. 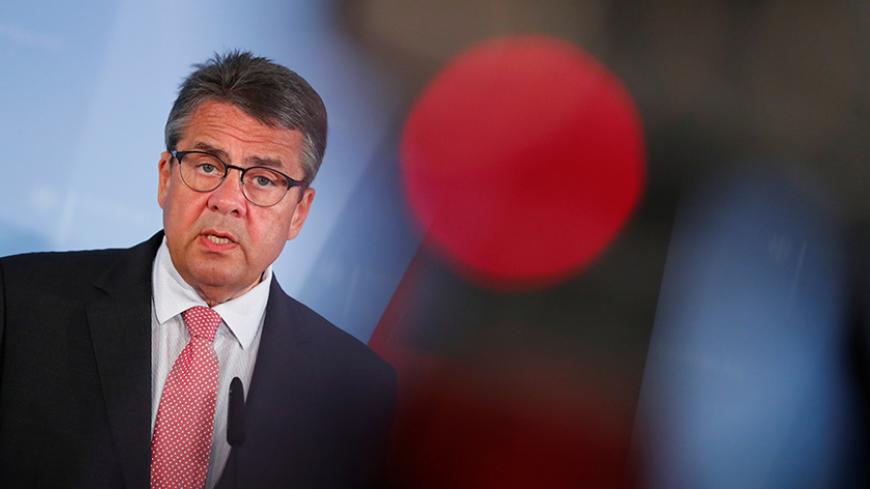 The crisis between Turkey and Germany over the detention of a German human rights defender and two German journalists is escalating amid signs that Germany is preparing to transition from sharpening rebukes to punitive actions.

Germany’s Foreign Minister Sigmar Gabriel, who declared a “re-orientation” of Germany's Turkey policy, told the press in Berlin today that the country’s actions show it's “departing from the basis of European values."

“One can’t advise anyone to invest in a country when there is no legal certainty and where companies, completely respectable companies, are presented as terrorists,” Gabriel said. “I therefore do not see how, as the government, we can still guarantee German company investments in Turkey if, as has happened, arbitrary expropriations for political reasons have not only been threatened but have already taken place.”

Gabriel’s comments come as Germany’s association of exporters suggested that the threat to economic ties between the two countries were far from empty. In the same report, Bloomberg quoted the lobby group as saying, “You certainly can’t advise any companies to take on investments in this climate.”

Germany is Turkey’s biggest trading partner and, and with $14 billion in annual sales, its biggest export market. The German tourists who once flocked to Turkey are now staying away.

The row between the two NATO allies has been simmering for some time. It was triggered in part by Germany’s refusal to extradite Turkish military officers who Turkey alleges were involved in last summer's failed putsch. Germany has offered asylum to some of the men who were previously stationed at NATO facilities in Germany. In reprisal, Turkey refused to let German parliamentarians visit German military personnel stationed at the Incirlik air base as part of the US-led coalition against the Islamic State. Germany is relocating its planes and soldiers to Jordan in protest.

Relations were further strained when local administrators denied permission for Turkish President Recep Tayyip Erdogan to campaign in Germany, which is host to an estimated three million Turks for his executive presidency plans that were approved in a controversial referendum in April. But the biggest blow came with the arrests of Turkish German journalists Deniz Yucel and Mesale Tolu over thinly supported terror charges. And when a Turkish prosecutor arrested German rights activist Peter Steudtner and five other human rights defenders this week, it proved to be the final straw.

Gabriel said the case showed that “German citizens are no longer safe from arbitrary arrests in Turkey.” He went on, “We have no other choice — because we are responsible for the protection of our citizens of our country — but to adapt our travel and safety advisory to Turkey and let German know what can happen to them when they travel to Turkey.”

Gabriel warned, “We can’t go on as we have before. … We have to be clearer than before so that those in charge in Ankara understand that such a policy won’t be without consequences.”

John Dalhuisen, Amnesty International director of Europe and central Asia, said at a press conference, “Too many Western governments have been locked in a fatal embrace with the Turkish government at the moment it slides into an authoritarian direction. … These arrests represent a red line, and must be the moment when the terms of engagement with Turkey are reset.”

But will they be? Many including Al-Monitor columnist Semih Idiz have aired doubt that there is much Germany and Turkey’s other Western allies can do, especially for as long Turkey serves as a holding pen for millions of Syrian refugees who given a chance would all head to Europe.

The Donald Trump administration has been more vocal about Turkey’s accelerating descent into authoritarianism. US Ambassador to Turkey John Bass paid a publicized visit to Amnesty’s Istanbul offices ahead of the Tuesday’s hearing, but to no avail. The London-based watchdog’s Turkey director Idil Eser was among those who were remanded in pre-trial detention on outlandish charges of secretly plotting civil unrest in Turkey.

State Department Spokesperson Heather Nauert later commented, “Prosecutions like these with little evidence or transparency undermine Turkey’s rule of law and the country’s obligations to respect individual rights. We urge Turkish authorities to drop the charges, release those who have been detained and remove the provisions of the state of emergency that allow indiscriminate prosecution of individuals. So, we will continue to keep an eye on that,” she said.

Kati Piri is a member of the European Parliament and its Turkey rapporteur. She was among those who helped drive through a vote calling for the European Union to suspend membership talks with Turkey. She told Al-Monitor that Germany’s response pointed to a “clear hardening against Turkey, which will also have an influence on the EU’s position as Berlin was the country opting for a more pragmatic approach.”

Piri reckons that now, EU options include “to seriously cut back on the EU pre-accession funds (700 million euros a year). She added that Germany could also block the opening of negotiations on upgrading Turkey’s customs union with the European bloc. A high level political dialogue between ranking EU and Turkish officials is set to be held on July 25, the day after 15 journalists from the left-wing daily Cumhuriyet, including Al-Monitor columnist Kadri Gursel, will appear for the first time in court. Twelve of them including Gursel are in jail. If they are not freed then, Piri suggested this “could become a crucial turning point.”

Remarks by a spokesman for German Chancellor Angela Merkel today indicated that Piri's predictions may prove right. The spokesman alluded to the annual aid provided by the bloc to Turkey that is slated for measures to strengthen democracy, the rule of law and economic growth and competitiveness as part of the country’s longstanding bid for EU membership.

“We think it would be right to review this [aid] now given the latest developments in Turkey,” the spokesman said. It is unclear “whether this aid can achieve the desired result given the current situation,” he added.

Marc Pierini, a former EU ambassador to Ankara and a fellow at Carnegie Europe, told Al-Monitor, “In normal circumstances, dialogue at the ministerial level should be the conduit for resolving such a crisis. But this time, circumstances are very different. … Ankara seems convinced that foreigners might be supporting civil unrest in Turkey.” Berlin for its part hasn’t forgotten Erdogan’s outbursts about Nazis and gas chambers. Pierini warned, “The obvious risk now is an escalation of words and possibly further arrests."

Turkey’s continued defiance was on display today as presidential spokesman Ibrahim Kalin dismissed Gabriel’s remarks as electioneering. “We believe these are a domestic political investment for the approaching German elections. This has become a kind of fashion in Germany. They are trying to score points,” he said. Kalin repeated the accusations that Germany is harboring Turkish traitors and fugitives and disrespects the Turkish justice system. “They need to free themselves from this suspension of reason and reflect.”