While Israel’s cancellation of travel permits to some 200,000 Palestinians during the end of the month of Ramadan was a setback to the plans of many, it was a blessing in disguise for local entrepreneurs, restaurants and resorts. 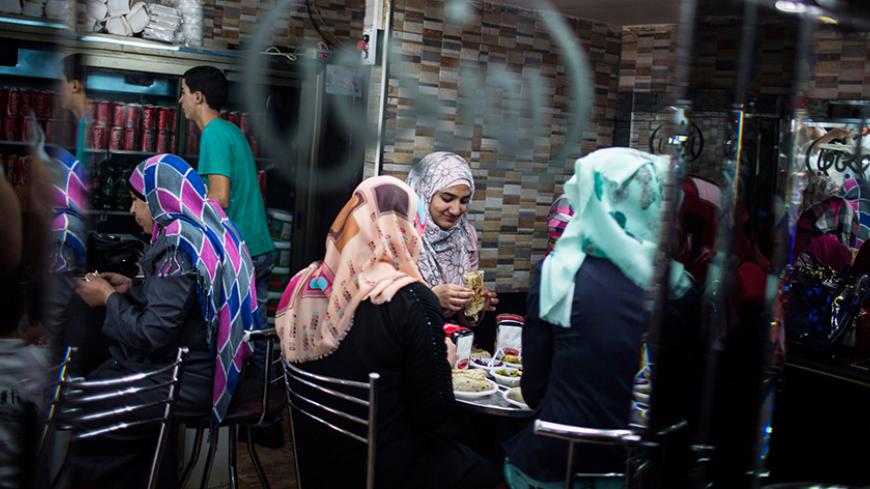 In addition to the issuing of orders to demolish the West Bank homes of the youths following the attack, the Israeli army canceled June 18 the permits of some 200,000 Palestinians to visit Jerusalem and Israel. The permits issued for the holy month of Ramadan canceled the trips of many West Bank Palestinians to the shores of the Mediterranean, the Sea of Galilee and other tourist spots in Israel.

But the collective punishment levied on Palestinians was a blessing in disguise for others. West Bank shops, malls, hotels, restaurants and entertainment sites recorded full capacity during Eid al-Fitr on June 25-28, marking the end of the month of fasting. Travel outside of the West Bank to Jordan, Sharm el-Sheikh in Egypt, and Turkish resorts also set record numbers late in June.

The reservations director at the Golden Park Resort in Beit Sahour near Bethlehem told Al-Monitor that the resort was at full capacity the entire four-day holiday. The owner of the Dalou vegetable and fruit store, one of the oldest in the old city of Ramallah, said that the holiday produced high sales, especially for local restaurants. Nearby, grocery store owner Badra Khayatt said that the holiday crowds who did not travel spent their money in Ramallah for a change. Even local Ramallah barber Abu Issa told Al-Monitor that his salon was open for nearly 60 consecutive hours.

Those who didn’t travel to Israel and wanted to enjoy the seaside during the hot June month traveled to Jordan and, via Jordan, to Egypt and Turkey.

Issam Sartawi, the spokesman for the Jordanian Public Security Directorate, told Al-Monitor that a record 38,000 passengers crossed the King Hussein (Allenby) Bridge in both directions during the four-day holiday. He said those leaving the West Bank outnumbered those visiting, 57% and 43%, respectively. “We recorded 21,531 incoming travelers versus 16,795 who left Jordan to the West Bank.”

Although not expected or planned, the change in Palestinian plans due to the Israeli cancellation of the travel permits reveals a long-standing claim that the permits are issued during holidays to benefit Israeli businesses and resorts.

Freelance political analyst Abdel Majed Swelem argues that the permit system allows the occupiers to control who travels and when from the occupied territories to Israel. “They want to show that Palestinians have no problem with Israel and that given an opportunity they aspire to engage Israelis,” he told a reporter of the local Palestinian Amin website in November 2012.

Maher Tasisier al-Tabaa, the head of the public relations department at the Gaza Chamber of Commerce, told Al-Monitor that this year, the economic benefits to local businesses were visible. “For the first time in years, Palestinians have spent most of their holiday money in local restaurants, hotels and resorts.” He explained that in past years, the money was spent in Israel benefiting Israeli businesses.

Leading Palestinian daily Al-Quds ran a long feature story June 25 about local clothing store owners in the northern West Bank city of Jenin saying they had higher than usual sales this year. Store owner Bilal said that he has had a good season for the sale of clothes for youth. “This has been a record year for sales of clothes especially for young people,” he told the local Al-Quds reporter.

While the cancellation of the travel permits to 200,000 Palestinians during the end of the fasting month was a setback to the plans of many, local entrepreneurs, restaurants and resorts clearly benefited. The change of plans for many families caused some irritation, but the fact that they were able to spend time together locally or at resorts in the region made up for the disappointment.

Palestinians remain hopeful that one day their circumstances will change and that they can live a normal life in their own country, choosing where and when they travel without their family plans being jeopardized by orders from a foreign occupier as a collective punishment for an act that they had nothing to do with.