Debate over the extent and nature of the private versus the public heats up again in Iran, highlighting the continued evolution of demands for social freedoms. 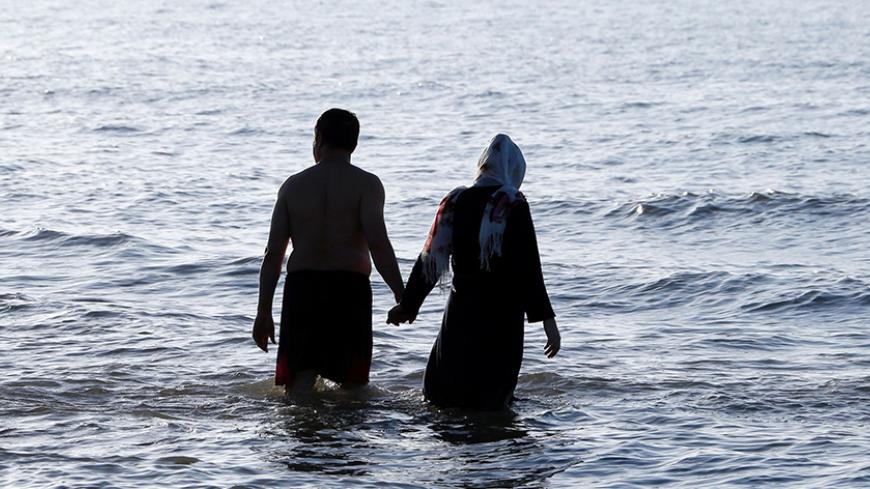 Every now and then, Iranian media outlets are full of news and analysis about the boundaries between the “private” and “public” spheres. The most recent episode began July 7, when Mohammad Tarahomi, legal affairs traffic police deputy, announced that personal vehicles are not considered a “private sphere” and are thus subject to all public regulations, including mandatory veiling. The trunk and glove compartments of personal cars are, however, considered private spaces, because their interiors are not visible and therefore not subject to random police inspections.

The matter of what constitutes private versus public is not just an obsession of the police. Experts from a range of disciplines, including grand ayatollahs, lawyers, political analysts and lawmakers, all publicly express their views and advocate their perspectives on the matter. It is within this context that the quest for privacy has given rise to a mushrooming of privately managed residential complexes, especially in the Caspian Sea resorts in the northern provinces of Mazandaran and Gilan.

For many Iranians, these private complexes offer a Sharia-exempt space, or in other words, a small-scale “free” mini-city in which women commonly flout mandatory veiling, sunbathe on the beach and publicly consume alcohol. This side-stepping has not, however, gone unnoticed by the vigilant eyes of the Moral Security Police, whose head, Gholam-Heydar Heydari, on June 21 warned owners of such complexes that they must abide by public laws. Immediately after the warning, Reformist parliamentarian Mahmoud Sadeghi stated that private beaches are considered personal spaces and that police patrols and inspections of these complexes are forbidden without a court order based on reasonable grounds and on a case-by-case basis.

What is at stake in this controversy is the demarcation of the jurisdiction of law and the expansion of exempted areas, namely the private sphere. Topping the list of contended issues are those involving sartorial codes, such as the wearing of headscarfs; morality laws, like forbiding consumption of alcohol; and traffic control laws, like noise pollution, which is a euphemism for unlicensed music.

In cases where people do not see the total abolishment of such laws as viable options on the horizon, they find ways to bypass them that still leave room for negotiation with authorities. Although challenging the law on mandatory veiling is considered against the Sharia as understood by the state clergy, debate on the boundaries of the private sphere is accepted in principle.

The acceptability of the principle of non-intrusion into the private sphere is partly based on a 1982 decree by the founder of the Islamic Republic, Ayatollah Ruhollah Khomeini, that is praised as the emblem of Islam’s respect for the privacy of individuals. Although Khomeini did not use the term “private sphere” in his decree, and while it was issued primarily to speed the Islamization of laws in the post-revolutionary period, three of its articles directly relate to protected freedoms: Article 4 warns against arbitrary detention without a court mandate; Article 5 admonishes the unlawful confiscation of private property; and Article 6 prohibits nonconsensual entrance onto private property and into personal businesses, wiretapping without a court order and disclosures of personal information.

Three factions are now distinguishable in the debate over the boundaries of the private sphere. First, traditionalist clerics and their grassroots followers — supported by certain high-level statesmen — advocate their version of an Islamic public sphere in which any manifestation of non-Islamic behavior should be withdrawn into the hidden enclaves of homes. In short, they define privacy as invisibility. Following the recent uproar over the boundaries of the private sphere, Grand Ayatollah Nasser Makarem Shirazi clearly stated on July 11 that the main criteria for “privacy” is invisibility. In this vein, Makarem Shirazi argued that if one erects a glass house in the middle of a public place, it should not be considered a private sphere merely because it is personal property.

The second group consists primarily of people with Reformist political inclinations, lawyers and civil society activists who campaign for establishing the boundaries of the private sphere to include private property. For instance, parliamentarian Mohammad Kazemi asserted on July 8 that a personal vehicle is on the whole a private sphere and that the visibility or invisibility of the vehicle’s internal space is irrelevant.

The third group comprises administrative bureaucrats as well as mid-level technocrats and managers within the police and the judiciary. Their views are largely based on executive expediency and concerns about applicability rather than on ideological or political grounds. While they generally go unnoticed in these politically loaded public debates, their views toward the regulation at hand are highly instrumental in the final application or abolishment of a law. For these administrative bureaucrats, law enforcement officers and judicial personnel, the main priority is a decrease in the massive workload that results from the criminalization of widespread social behaviors, such as de-veiling and consuming alcohol. Hence, in effect, the very executive bodies responsible for enforcement of social disciplinary restrictions can also often simultaneously be the main obstacle to them.

On the whole, the highly charged debate over the private versus the public is yet another example of the broader social and political divisions in contemporary Iran as well as the varied modes of resistance against the official discourse of the state. If questioning restrictive Islamic laws transgresses the discursive red lines of the Islamic Republic, opponents of such regulations can initiate entirely new public debates in which claims are reproduced with a legitimate language but with the same aim and the same function, namely to expand social freedoms.