One of the most heated issues of the Syrian war has been the possibility of Kurdish cantons connecting, overcoming Turkey’s threatening objections. And now, with the Aleppo road open, Kurdish cantons are connected for the first time in four years. 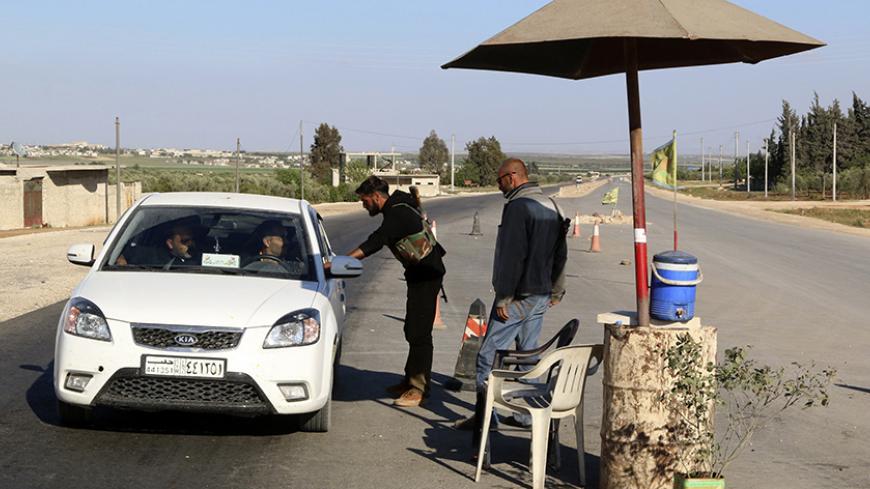 Kurdish fighters from the People's Protection Units (YPG) man a checkpoint near the city of Afrin, Syria, April 30, 2014. - REUTERS/Mahmoud Hebbo

DIYARBAKIR, Turkey — “Can the three Kurdish cantons declared by the Democratic Union Party [PYD] in northern Syria be considered de facto united?” is the question of the day in northern Syria. Syrian Kurdish journalist Mustafa Abdi answers: “Yes. It happened.”

In the summer of 2012, Kurdish-populated areas close to the Turkish border in Syria’s north one by one came under the control of the Kurdish People’s Protection Units (YPG). The stretch of territory from the Iraqi border to Turkey’s Hatay province became controlled by the Kurds, but not as a contiguous geographical entity. Some said Bashar al-Assad's regime had withdrawn from the region and handed it over to the Kurds. Kurds said they had captured it themselves. Turkey wasn’t interested in how it was done but in what it would become.

A short time later, Kurds declared a Democratic Autonomous Administration, divided into three parts: Cizre in the east on the Iraqi border, Kobani in the center and westernmost at Afrin.

They were internally autonomous but geographically separated cantons, with the areas separating them controlled by jihadist groups. But the idea of Kurdish cantons uniting and creating a new Kurdish entity on Turkey’s border has been a hotly debated issue during the Syrian civil war. Turkey opposes the cantons feverishly — so much so that at times this opposition replaces its primary slogan of “Assad must go.”

After declaring their cantons, Kurdish forces continued their advances. Sometimes by itself and sometimes jointly with the Syrian Democratic Forces (SDF), the YPG began cleansing the gaps between the cantons of the Islamic State (IS) and other jihadist groups.

Just as they were making progress, Turkey launched Operation Euphrates Shield and sent its army and locally affiliated groups into Syria. Although the official Turkish goal was said to be to push IS away from the Turkish border, it was obvious that the real purpose was to prevent Kurdish cantons from geographically uniting. The operation extended to al-Bab, and the Turkish army imposed its control on the region.

For Turkey that meant the threat of cantons linking up was no more, but there were unexpected developments. The Syrian army — with the help of Russia — cleansed Aleppo of jihadist groups.

Then, the Aleppo-Afrin highway and its side roads that were blocked for four years were reopened to traffic.

In a war environment, the opening or closing of roads may be considered routine events. But in this case, it was far more than that. As journalist Mustafa Abdi noted, this time it meant unification of the Kurdish cantons. Afrin, which had been squeezed in the north between Turkey, jihadist groups and regime forces, could finally breathe a bit. The people of Afrin can now reach other cantons using the Aleppo-Manbij route and vice versa. What does all this mean?

An Afrin resident Al-Monitor reached via internet noted that civilians cannot yet fully utilize the route because of safety fears. This resident, who didn’t want his name used, said, “Disruptions caused by war are still there. We all want to be linked, particularly for economic reasons. Civilians are not yet using the road, but military forces are.”

But according to Afrin politician Rezan Hebdo, cantons are now linked. Hebdo told Al-Monitor that a person from Afrin can go to the easternmost Cizre canton. “Some areas in between are under the regime control. The opening of this road was a major success. After the Russians dominated the region, the areas between Afrin and the regime-controlled parts became accessible,” he said.

Hebdo says they haven’t yet felt the full benefits of the opening of the roads: “There are still problems between the regime and the SDF. If the road becomes fully usable, fuel prices will fall. Afrin is a poor town with nobody really in charge. Moreover, it houses 400,000 internally displaced people who fled to this area. If the roads are to open fully, there will be economic progress. Yes, today we can leave Afrin and reach Kobani and Cizre, but we have to pass through regime checkpoints. Turkey made an operation to thwart the linking up of cantons, but that happened at the south of al-Bab.”

This is what those living on the western end of the road think. At the eastern end, residents feel mostly the same. Journalist Abdi, who lives in the Kobani canton, thinks the cantons are not only internally consolidated but also have linked up with other regions of Syria.

Abdi said, “Those who want can reach all parts of Syria via Cizre, Kobani, Manbij and Aleppo roads. They can go to Damascus, Homs — even to Lebanon. Youth are reluctant to go because they are afraid of being apprehended by regime soldiers on charges of being rebels or evading military service. It is mostly those above 50 years of age who travel. This road was closed for four years. We couldn’t go from Kobani to Aleppo. Today this road has linked Cizre canton to Aleppo. We hope the road will open to commerce. Abundant wheat and barley grown in the Cizre canton should reach Aleppo, Afrin and elsewhere. The road now enables traveling to Afrin via Aleppo. It is olive harvest time at Afrin. Why not send that plentiful produce to Kobani, Cizre and even to Iraqi Kurdistan? After the Russians came, movement in that area eased. Russians had a big part in that. Even today, journalists travel to Afrin from Kobani escorted by Russians."

No doubt, those delighted most with the opening of the road are the people of Afrin who can breathe freely at last. Other cantons did not have the same level of hardships because they were not under as tight of a siege as Afrin. With the opening of the road, cantons can support each other militarily, politically and economically. The road that bypassed al-Bab from the south linked the cantons. Kurds now hope that Turkey will get out from between them and allow the cantons to physically unite. But at the moment, that may well be wishful thinking.