Retired diplomats say Erdogan’s Qatar policy is driven more by his survival instinct than a rational foreign policy and that Ankara has squandered an opportunity to play a positive role in this crisis. 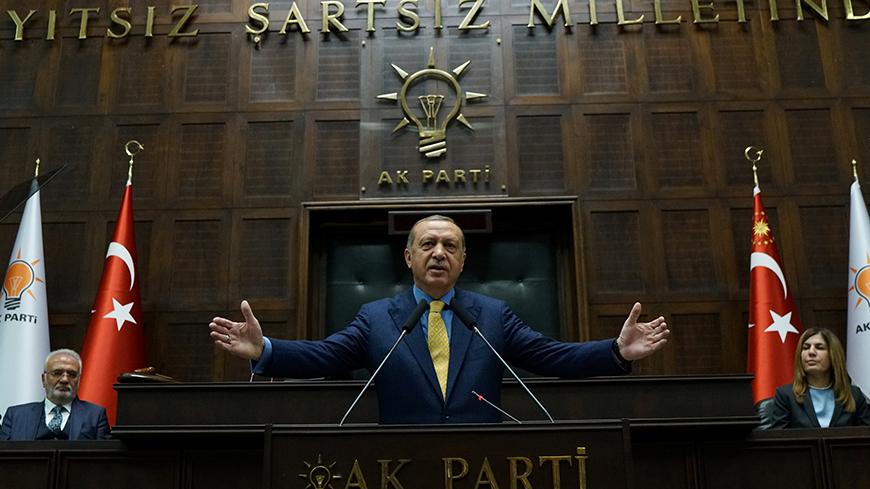 Turkish President Recep Tayyip Erdogan addresses members of parliament from his ruling Justice and Development Party during a meeting at the Turkish parliament in Ankara, May 30, 2017. - REUTERS/Umit Bektas

Very little has gone the way President Recep Tayyip Erdogan wanted in the Middle East since the start of the now-defunct Arab Spring. His reaction to the Qatar crisis, where he threw his lot in with Doha at the expense of endangering ties with Saudi Arabia and other Gulf states, appears to be the latest episode in this enigma.

This development is also likely to force Erdogan to ease tensions with Tehran, which also backs Qatar, to avoid facing a new bout of isolation in the region. Tellingly, Iranian Foreign Minister Mohammad Javad Zarif was in Ankara literally within hours of the Qatar crisis' breaking out.

It is noteworthy that Erdogan was warning the Gulf states not so long ago against Iran’s regional ambitions, so we could be facing a new tack by him from one side to the other, depending on which way the wind is blowing.

Many consider Erdogan’s reaction as a new example of his impulsive and erratic approach to foreign policy, and they note that this has left Ankara out of tune with the regional established order once again, facing more difficult choices. His stance has also left experts wondering about what is really driving Ankara’s foreign policy.

Erdogan, who was prime minister when the Arab Spring broke out, and Ahmet Davutoglu, his overambitious foreign minister, had great expectations for Turkey at the time. It was to be the historic moment that would make Turkey the principal regional player on the basis of shared Islamic values. Being the region’s former ruler, Turkey knew best what was good for it and would provide this to the benefit of all.

This oversimplification did not factor in Arab nationalism, latent historic antipathy toward Turkey, the inbred dislike by the region’s established order for political Islam, and most important, the Sunni-Shiite divide that has always been a major fault line in the Middle East.

Subsequent developments, including the worsening situation in Syria, Ankara’s deteriorating ties with the West and its growing suspicions about Iran’s regional ambitions, eventually forced Erdogan to swallow his dislike of Saudi Arabia for its support of the Egyptian coup and move to forge strategic ties with Riyadh.

During a visit to Riyadh in 2015, he was keen to join the Saudi-led, 34-nation coalition against terrorism, which many in the region consider to be a predominantly Sunni and anti-Iranian alliance.

Erdogan was back in the Gulf region again this February — and also visited Saudi Arabia — where he warned against “Persian nationalism.”

During all this time, Qatar remained as the only regional country with which Turkey saw eye to eye on Syria and the Muslim Brotherhood. Qatar also stood by Turkey when certain moves by Ankara were raising eyebrows in the region.

Qatar became a major investor in Turkey. Ankara decided in late 2014 to open a military base in Qatar to signal that it was developing strategic ties with the Gulf state.

The current crisis with Qatar caught Ankara unaware and threw another wrench in the works as far as Erdogan’s expectations in the Middle East are concerned. This crisis also left him on the horns of a new dilemma, caught as he is between Iran and Saudi Arabia.

His dilemma is self-inflicted, though. Rather than stepping back to see the big picture, and by ignoring warnings of retired diplomats and foreign policy experts to remain neutral and try and act as a mediator between Doha and Riyadh, Erdogan went out on a limb again with his unequivocal support for Qatar.

Many believe he was driven by what Amberin Zaman referred to in a recent Al-Monitor article as “the increasingly conspiratorial and paranoid mindset in Ankara [that] has some worrying that Turkey may somehow be in the line of fire.”

Erdogan’s supporters believe the move against Qatar is an indirect warning to Ankara because, like Qatar, it backs the Muslim Brotherhood and Hamas and has also been accused — most vocally by the UAE — of supporting radical Islamic groups.

The belief that Saudi Arabia and Egypt, with US support, are aiming to topple the current rulers of Qatar is the main fear felt by Erdogan supporters — and no doubt many of his advisers — who are concerned that “Erdogan’s Turkey is next.”

Retired Ambassador Suha Umar, whose past postings include Amman, argued that there is no foreign policy logic or vision to Erdogan’s approach to Qatar.

“It is based only on the need for one person to ensure his political survival and remain in power. There is no point in searching for a coherent strategy in this approach,” Umar told Al-Monitor.

Uma said that Ankara also needs to maintain the inflow of “hot money” provided by Qatar given that Turkey’s economy faces uncertainties, and he indicated that this is also one of the short-term goals behind Erdogan’s strong support for Doha.

Retired Ambassador Unal Cevikoz bemoaned the fact that by taking sides in this crisis, Turkey lost another chance to be a positive regional force.

“Turkey is involved in a strategic dialogue partnership with the Gulf Cooperation Council. It is regretful at a time when it has been developing multilateral ties based on trust that Turkey cannot use this to advantage in the Qatar crisis,” Cevikoz wrote in Hurriyet.

A less optimistic Umar said Turkey lost any chance of being a regional honest broker or mediator long before this crisis because of its serious foreign policy mistakes and miscalculations since the Arab Spring.

“Even if it tried to play this role today, Turkey has no credibility left. It is seen as an unreliable partner, which ensures that it has no clout left in the Middle East,” Umar said.

It remains to be seen if Erdogan can balance ties with Riyadh and Tehran while maintaining his strong support for Qatar and, on top of all this, ensure that this crisis does not have a negative impact on Turkey.

There is also the question of what happens if Qatar bows to Saudi pressures, as many predict it will have to in the end, and where this will leave Turkey given its current stance.

Many believe Erdogan lacks the diplomatic skills to juggle all of this and come out on top because he is embroiled in his domestic agenda, where he is trying to ensure his full transition to leadership after the constitutional referendum in April increased his powers and made him Turkey’s executive president.

Many like Umar and Cevikoz also believe that matters are unlikely to improve, and will continue to get worse for Turkey in the Middle East, until Ankara can develop a holistic approach to foreign policy that factors in the realities of the region and the broader world and balances these with Turkey’s objective long-term interests.