The collapse of Turkish army’s health and education system

Food poisoning incidents at military barracks in Turkey shed light on the far-reaching effects of the Turkish army’s loss of deep-rooted health and education institutions in the wake of last year’s attempted coup. 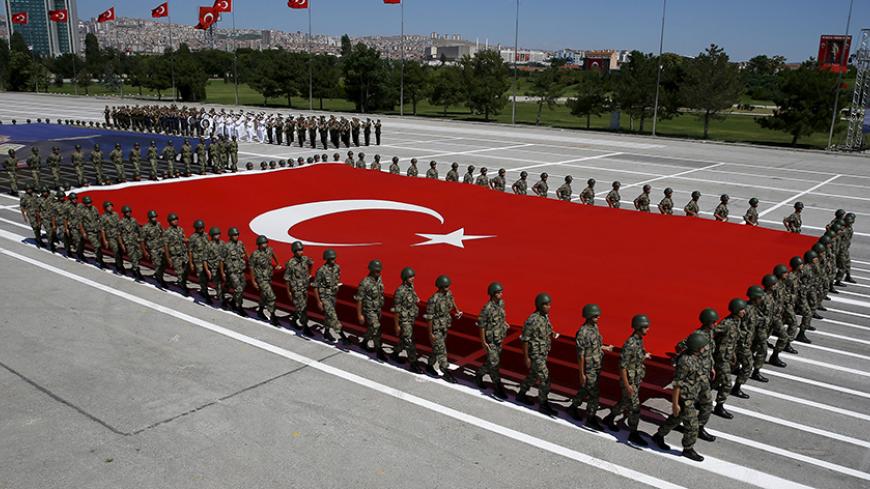 Turkish soldiers carry a huge national flag and a portrait of Mustafa Kemal Ataturk, the founder of modern Turkey, during a military parade marking the 93rd anniversary of Victory Day in Ankara, Turkey, Aug. 30, 2015. - REUTERS/Umit Bektas

In late May, more than 1,000 soldiers from a land forces brigade in the western Turkish province of Manisa were hospitalized for food poisoning, and one of them lost his life. The problem at the barracks, where 6,000 new conscripts are receiving training, was described as intestinal infection, but the detailed medical analyses of samples from affected soldiers have not been released. On June 17, a new bout of mass food poisonings occurred in Manisa. Around the same time, dozens of soldiers were hospitalized also in Kastamonu and Diyarbakir, again with food poisoning symptoms.

The main opposition Republican People’s Party (CHP) and other opposition parties raised the issue in parliament, proposing an inquiry commission to investigate the food poisoning incidents. The proposal was voted down by lawmakers of the Justice and Development Party (AKP), who hold the majority in the legislature.

The CHP has also requested an emergency meeting of the parliament’s National Defense Commission, calling for an explanation of why private subcontractors have taken over food services at military garrisons.

Opposition parties claim the catering contracts of many military and other public institutions have been awarded to companies close to the AKP, including the one in Manisa. Following a total of four food poisoning incidents over a month, the company in Manisa saw its contract canceled and about 40 of its managers and employees detained.

Prime Minister Binali Yildirim said that catering services for the military would be taken out of the public tender system and that a special arrangement would be made for this realm. Under the current system, the company with the lowest bid wins the tender. The lowest price, however, often means the lowest quality. To reduce their cost, the winning companies are said to produce unhealthy food, using products with close expiration dates.

The real question, however, is why mass food poisonings and food-borne infections did not happen before in the army and have shot up in recent months? This takes us to the aftermath of last year’s attempted coup, when the government installed an emergency rule and obtained the power to issue legislative decrees. Many of those decrees targeted military institutions on the grounds that followers of US-based cleric Fethullah Gulen, the accused mastermind of the putsch, had infiltrated the army.

Under the decrees, all military educational institutions — schools and academies — were closed down, and a National Defense University was created instead to train military personnel. Similarly, 33 military hospitals — among them the prestigious Gulhane Military Medical Academy (GATA), founded in 1891 by Sultan Abdulhamid II — and other military health care and rehabilitation centers were transferred to the Health Ministry and opened to civilian patients.

According to former Chief of General Staff Ilker Basbug, the closures destroyed the Turkish Armed Forces’ two-centuries-old institutional tradition in the educational and medical fields. “The military schools are an Ottoman legacy. How do you resolve the problem by closing down those institutions? You are [in fact] cutting the veins of the Turkish army,” he said in a television interview in August.

The Defense Ministry’s press adviser, Ertan Omeroglu, however, argued that 95% of the students and personnel at military schools were linked to the Gulen community, which the government has rebranded as the Fethullah Gulen Terror Organization. Pointing to other military coups in Turkey’s recent history, Omeroglu said, “The education and training system in those institutions was not democratic. Now, the National Defense University will raise pro-democracy soldiers.”

Following the mass food poisonings, the most striking statement came from the Turkish Medical Association (TTB). It argued that the dismantling of the military health institutions had created a serious vacuum, which the Health Ministry was failing to fill. According to the TTB, military bases with thousands of soldiers have been left without food control platoons and food laboratories, and the catering services provided by private companies have continued without any control in terms of hygiene or public health. The sidelining of experienced military staff also crippled the system, it said. The association called for the reopening of the GATA and military hospitals and the return of health institutions to the army, warning, “All military units are under the threat of epidemics stemming from [bad] food and hygiene.”

Retired Vice Admiral Can Erenoglu tweeted, “Under our 1,000-year tradition, the food has to be cooked in the barracks and served to the soldiers after the commander has tasted it. Is some company supposed to provide the food during war as well?”

An article on a website run by retired noncommissioned officers, meanwhile, emphasizes the critical importance of military doctors. “Military doctors are at the same time soldiers. Along with their medical education, they receive military training as well and, if necessary, can take up arms to join a battle. A military doctor is something very different from a civilian doctor,” the article said. “The Turkish Armed Forces today have become the only army in the world without military hospitals and military doctors.”

During the mass food poisonings, state hospitals struggled to handle the number of affected soldiers who needed treatment. Those incidents shed light on the debilitating effect that the legislative decrees have had on the armed forces while seeking to reshape them. The transfer of military authorities and responsibilities to the civilian bureaucracy has led to serious shortcomings. The erasing of the army’s institutional memory and centuries-old experience through legislative decrees is bringing up the question of power erosion as well. Many now wonder about the consequences if similar incidents occur during wartime.

The government, meanwhile, is sending troops to Qatar amid the crisis in the Gulf, drawing more criticism from the opposition. “Those who are using our soldiers for bluster should first provide decent food for their troops before sending any to Qatar,” CHP’s Yasar Tuzun said.